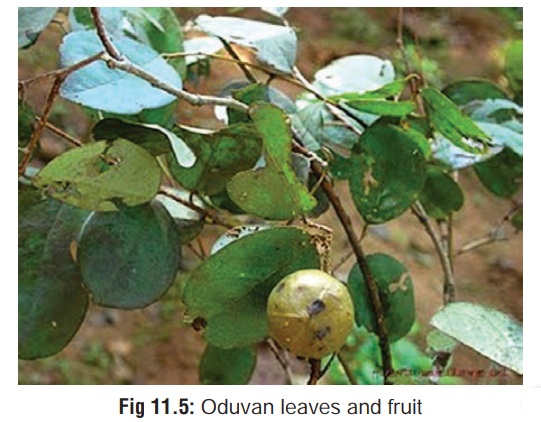 ·      Cleistanthus collinusbelongs to family Phyllanthaceae (some-times placed in Euphorbiaceae), and grows wild in dry hills of various parts of India from Himachal Pradesh to Bihar, and

·      It is a small, deciduous tree with spreading, smooth branches. Leaves are orbicular, broadly ovate or elliptical, with rounded tips (Fig 11.5).

·      The fruit capsule is large, somewhat trigonous, woody, dark- brown, and appears shining and wrinkled when dry. Seeds are globose and chestnut-brown in colour. 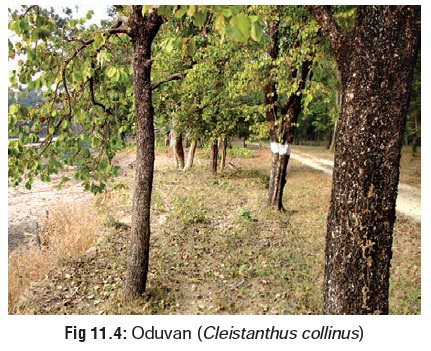 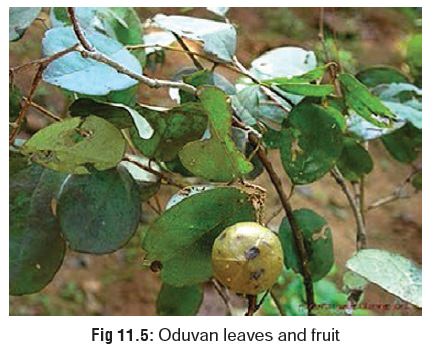 ·      Extract of the various plant parts yield a multitude of compounds of which the glycosides, arylnaphthalene lignin lactones are toxic. These lignan lactones include cleistanthin A and B, collinusin and diphyllin, which in the past were known collectively as “oduvin”.

·      Neuromuscular weakness at presentation has been docu-mented.

·      ECG changes may include QTc prolongation and non-specific ST-T changes.

·      ABG may show evidence of metabolic acidosis, hypoxia, and a widened alveolar- arterial O2 gradient/difference (A-aDO2 gap), especially in those with respiratory failure.

Cases of suicide accomplished with parts of the Oduvan plant have been on the increase in recent times, in several parts of India, especially Tamil Nadu and Andhra Pradesh. Accidental poisoning has also been reported.