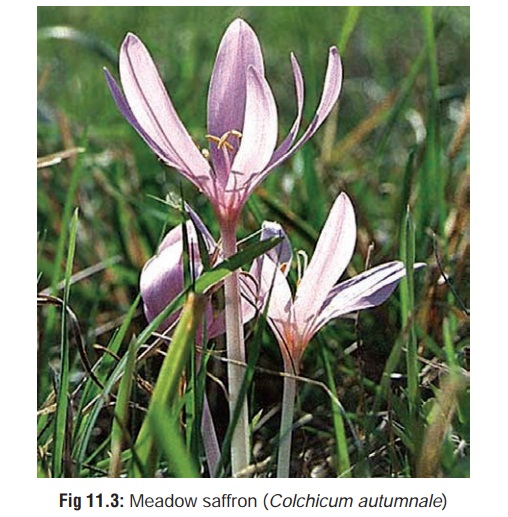 ·      The long, broad-lanceolate, dark green leaves are produced in spring, while the flowers bloom in succession from August to October, soon dying down.

·      The bulb-like fleshy underground stems (corms) are about the size of a small tulip bulb, and lie from 6 to 10 inches deep in the soil.

·      This plant grows well in England, Wales, and many European countries, but is relatively uncommon in Asia. However, it is encountered in the Himalayan region. The Indian variety usually bears yellowish flowers. 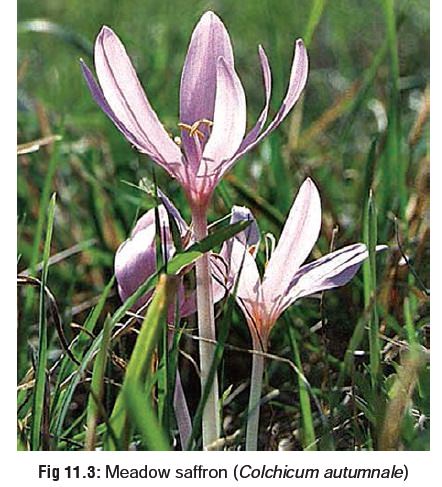 ■■   The main active principle colchicine is used in the treat-ment of gout. It acts by reducing the inflammatory response to the deposited urate crystals, and also by diminishing phagocytosis. Deposition of urate is favoured by acid pH. Colchicine counters acid pH environment by inhibiting lactic acid production by leucocytes, thereby interrupting urate deposition and inflammatory response that sustains the acute attack.

■■The fruit capsule of Autumn crocus contains numerous dark brown seeds. The dried capsule is often used as a “rattle” by children. Each seed contains approximately 3.5 mg of colchicine. Ingestion of 2 seeds may be poten-tially lethal.

Colchicine is an antimitotic agent, blocking mitosis in meta-phase and in the G1 phase, preventing DNA synthesis.

·      All patients should be observed for at least 12 hours, because of occasional late onset of manifestations.

·              Multiple dose activated charcoal may be beneficial because it interrupts enterohepatic recirculation, and should always be considered in patients with potentially serious or lethal ingestions.

·      Fluid and electrolyte status, especially potassium levels, should be followed closely, with administration of appropriate intra-venous fluids for replacement.

·      Patients suffering from bone marrow depression should be isolated to protect the patient from infection.

·      Haemodialysis and exchange transfusion are not likely to be helpful because of the large apparent volume of distribution of colchicine.

·      Multiple petechiae and ecchymoses over visceral pleura, pericardium, and peritoneum.

·      Haemorrhagic oedema and congestion of lungs.

·      Inflammation of stomach and intestines.