Chronic obstructive pulmonary disease (COPD) is a general term used to indicatechronic decreased respiratory function due to chronic bronchitis or emphysema. Both diseases are associated with smoking.

Chronic obstructive pulmonary disease (COPD) is a general term used to indicatechronic decreased respiratory function due to chronic bronchitis or emphysema. Both diseases are associated with smoking.

Chronic bronchitis is a clinical diagnosis made when a patient has a persistent coughand copious sputum production for at least 3 months in 2 consecutive years. It is highly associated with smoking (90%). Clinical findings include cough, sputum production, dyspnea, frequent infections, hypoxia, cyanosis, and weight gain.

Emphysema is the term used when destruction of alveolar septa results in enlargedair spaces and a loss of elastic recoil. The 4 types of emphysema are named for the anatomical distribution of the septal damage.

·              In centrilobular emphysema, the damage is in the proximal portion of the acinus and the cause is cigarette smoking.

·              In panacinar emphysema, the damage affects the entire acinus and the com-mon cause is alpha-1 antitrypsin deficiency.

·              In distal acinar emphysema (unknown cause), extension to the pleura causes pneumothorax.

The etiology of emphysema involves a protease/antiprotease imbalance. On gross examination, the lungs are overinflated and enlarged, and have enlarged, grossly visible air spaces. Clinical findings include progressive dyspnea, pursing of lips and use of accessory respiratory muscles to breathe, barrel chest (increased anterior-posterior diameter), and weight loss.

Asthma is due to hyperreactive airways, which undergo episodic bronchospasmwhen triggered by certain stimuli.

·            Drug-induced asthma affects about 10% of adults with a diagnosis of asthma.Aspirin is a key example of a precipitating drug.

·            Occupational asthma is caused by workplace triggers including fumes anddusts.

An asthma attack is characterized by wheezing, severe dyspnea, and coughing. Prob-lems with expiration cause lung overinflation. Status asthmaticus is a potentially fatal unrelenting attack of asthma. 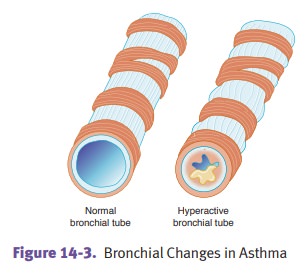 ·              Kartagener syndrome is an autosomal recessive condition caused by immotilecilia due to a defect of dynein arms (primary ciliary dyskinesia). It is character-ized clinically by bronchiectasis, chronic sinusitis, and situs inversus (a con-genital condition where the major visceral organs are anatomically reversed compared with their normal anatomical positions).

On gross examination, bronchiectasis shows dilated bronchi and bronchioles extend-ing out to the pleura. These changes may also be appreciated on chest x-ray. Compli-cations include abscess, septic emboli, cor pulmonale, and secondary amyloidosis. 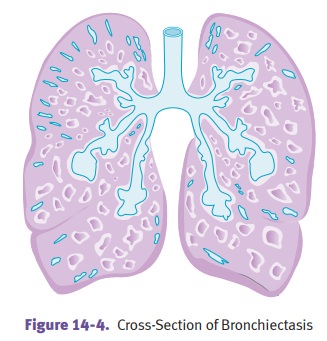