Acute respiratory distress syndrome (ARDS) refers to diffuse damage of alveolarepithelium and capillaries, resulting in progressive respiratory failure that is unre-sponsive to oxygen treatment. Clinicians use the term ARDS, while pathologists use the term diffuse alveolar damage (DAD) to describe the pathologic changes.

On gross pathologic examination affected lungs are heavy, stiff, and noncompli-ant. Microscopically, there is intra-alveolar edema, and hyaline membranes line the alveolar spaces. In resolving cases there is proliferation of type II pneumocytes and interstitial inflammation and fibrosis.

Treatment is based on treating the underlying cause and on supporting respiration with mechanical ventilation. The prognosis is problematic even with good care, with overall mortality 40%.

Respiratory distress syndrome of the newborn (hyaline membrane disease of new-borns) is caused by a deficiency of surfactant. It is associated with prematurity (gestational age of <28 weeks has a 60% incidence), maternal diabetes, multiple births, male gender, and cesarean section delivery. Clinically, infants are normal at birth but within a few hours develop increasing respiratory effort, tachypnea, nasal flaring, use of accessory muscles of respiration, an expiratory grunt, and cyanosis. Chest radiograph may demonstrate bilateral “ground- glass” reticulogranular densi-ties. Autopsy findings include atelectasis and hyaline membranes.

Treatment is surfactant replacement, mechanical ventilation, and continuous posi-tive airway pressure (CPAP). Respiratory distress syndrome of the newborn can sometimes be prevented if labor can be delayed and if corticosteroids are used to mature the lung. With improved therapies, now >90% of babies survive.

·            Nonspecific interstitial pneumonia has a better prognosis than IPF. There is acellular pattern and a fibrosing pattern. 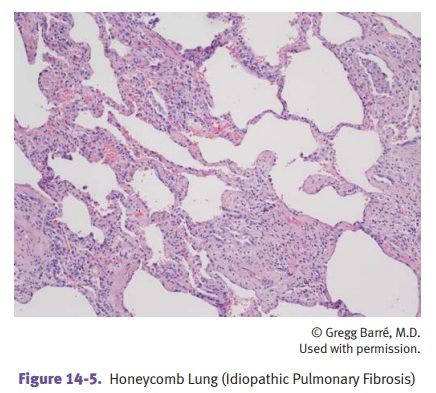 ·              Smoking-related pneumonitis.Several entities have been identified.

Occupation-associated pneumoconiosis is a common cause of chronic interstitiallung disease. It is considered separately here to show the full spectrum of disease since neoplasia may occur during its course.

·              Pneumoconioses are fibrosing pulmonary diseases caused by inhalation of anaerosol (mineral dusts, particles, vapors, or fumes). Key factors affecting their development include the type of aerosol and its ability to stimulate fibrosis; the dose and duration of exposure; and the size of the particle, with only particles <10 microns entering the alveolar sac.

Coal worker’s pneumoconiosis is an important pneumoconiosis that isdue to anthracosis, in which carbon pigment (anthracotic pigment) fromcoal mining accumulates in macrophages along the pleural lymphaticsand interstitium. Clinically, the disease may progress through severalstages. The earliest stage is asymptomatic.

Caplan syndrome is the term when pneumoconiosis (of any type) accom- panies rheumatoid arthritis.

·  Asbestosis is caused by members of a family of crystalline silicates. Occupa-tions in which asbestos exposure may occur include shipyard work, insulation and construction industries, brake-lining manufacture.

The pulmonary pathology of asbestosis is a diffuse interstitial fibrosis that begins in the lower lobes; it causes slowly progressive dyspnea which may eventually be complicated by secondary pulmonary hypertension and cor pulmonale. Pulmonary biopsy may demonstrate asbestos bodies that have become coated with iron (ferruginous bodies). Otherwise, the findings are the same as usual interstitial pneumonia.

Pleural involvement may take the form of parietal pleural plaques (acel- lular type I collagen deposition) in a symmetrical distribution involving the domes of the diaphragm and posterolateral chest walls on chest x-ray.

The apices and costophrenic angles are spared. Plaques on the anterior chest wall may be seen on CT. Fibrous pleural adhesions may occur on the visceral pleura.

Lung cancer is the most common tumor in asbestos-exposed individu- als; there is a strong synergistic effect between smoking and asbestos exposure.

Malignant mesothelioma is a rare, highly malignant neoplasm associ- ated with occupational exposure to asbestos in 90% of cases. It presents with recurrent pleural effusions, dyspnea, and chest pain. The tumor grossly encases and compresses the lung; microscopic exam exhibits car- cinomatous and sarcomatous elements (biphasic pattern), while electron microscopy shows long, thin microvilli on some tumor cells. The prog- nosis of mesothelioma is poor. Other problems include increased risk of laryngeal, stomach, and colon cancers. Family members also have increased risk of cancer due to the worker bringing home clothing cov- ered with asbestos fibers.

·  Silicosis is due to exposure to silicon dioxide (silica). It is seen most frequentlywith occupational exposure (sandblasters, metal grinders, miners). The pul-monary pathology shows dense nodular fibrosis of the upper lobes whichmay progress to massive fibrosis; birefringent silica particles can be seen with polarized light.

Patients present with insidious onset of dyspnea that is slowly progressive despite cessation of exposure. X-ray shows fibrotic nodules in the upper zones of the lungs. There is an increased risk of TB. 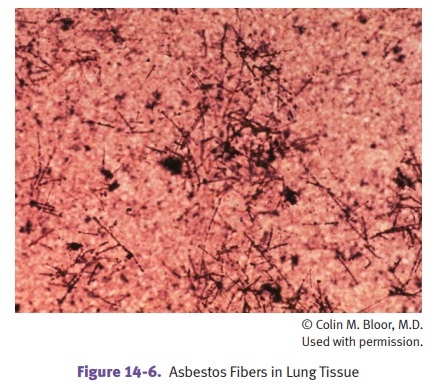