Infancy is a period of rapid growth. The development during infancy is more rapid than during at any other period in the life time of an individual.

The growth and development is accompa-nied by a number of physiological changes which include changes in body size and body composition, changes in the gastro intestinal system, excretory system and circulatory sys-tem. Nutrition is crucial and proper dietary modifications are vital during this period.

Malnutrition during infancy leads to a high-er incidence of infant mortality. Besides malnutrition,infection causes mortality. Immunization protects the children against disease. Table 6 below presents the immuni-zation schedule for infants and children.

Good nutrition is essential for the growth and development that occurs dur-ing an infant’s first year of life. As an infant’s mouth, tongue, and digestive tract mature, the infant shifts from being able to only suckle, swallow, and take in liquid foods, such as breast milk or infant formula, to being able to chew and receive a wide vari-ety of complementary foods. 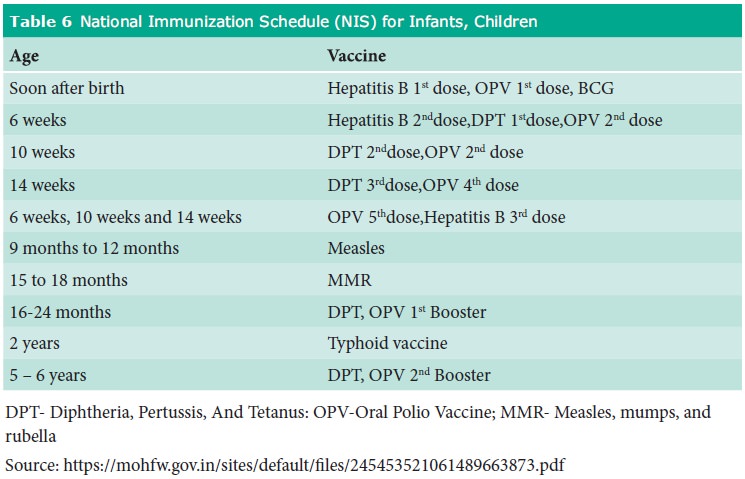 Energy: Infants need energy from food for activity, growth, and normal development. Energy comes from foods containing car-bohydrate, protein, or fat. A general indi-cator of infant consuming an adequate kil-ocalories per day is the infant’s growth rate in length, weight, and head circumference.

The major type of carbohydrate normally consumed by young infants is lac-tose, the carbohydrate source in breast milk. Lactose-free infant formulas, such as soy-based infant formulas provide car-bohydrates in the form of sucrose. In later infancy, infants derive carbohydrates from additional sources including cereal and other grain products, fruits, and vegetables.

Breast milk and infant formula are impor-tant sources of lipids, including essential fatty acids, during infancy.

An infant’s vitamin B12 stores at birth gen-erally supply his or her needs for approx-imately 8 months. Infants consuming appropriate amounts of breast milk from mothers with adequate B12 stores or infant formula receive adequate amounts of this vitamin. Complementary foods such as meat, egg yolks, and dairy products pro-vide this vitamin later in infancy as well.

An infant can obtain sufficient calcium by consuming adequate amounts of breast milk or infant formula. Older infants can obtain additional calcium from complementary foods such as yogurt, cheese, cottage cheese (paneer), fortified or enriched grain prod-ucts, some green leafy vegetables (such as turnip and greens), and tofu.

green vegetables. Heme iron is found primarily in animal tissues, including red meat, liver, poultry and fish and non-heme iron is found in breast milk, infant formula, cereals, or other grain products legumes, fruits and vegetables. Infants receive most of the iron in their diets as non heme iron.

Tofu, or bean curd, is a popular food derived from soya. It is a staple ingredient in Chinese cookery and is a good source of protein, containing all eight essential amino acids. It is also an excellent source of iron and calcium and the minerals man-ganese, selenium and phosphorous.

Breast milk contains no dietary fiber, and infants generally consume no fiber in the first 6 months of life. As complementary foods are introduced to the diet, fiber intake increases. Dietary fiber is found in legumes, whole grain foods, fruits, and vegetables.

Infants’ water needs are met from consum-ing breast milk, infant formula, and com-plementary foods. Water is also formed in the body in chemical reactions occurring to metabolize protein, fats, and carbohy-drates. Under normal circumstances, the water requirements of healthy infants who are fed adequate amounts of breast milk or properly reconstituted infant formula are met by the breast milk or infant for-mula alone.