Malnutrition in developing countries affects individ-uals throughout the life course: from birth to infancy and childhood, through adolescence into adulthood, and into old age.

Malnutrition in developing countries affects individ-uals throughout the life course: from birth to infancy and childhood, through adolescence into adulthood, and into old age. Malnutrition affects, therefore, criti-cal periods of growth and mental development, maturation, active reproductive as well as economical productive phases.

The health of populations in developing countries is largely determined by their environment. “Environ-mental” factors include social and economic con-ditions depending on and influencing availability and distribution of resources, agricultural and food systems, availability and access to nutritious food and safe drinking water, implementation of immuniza-tion programs, exposure to unhygienic surroundings and toxins, women’s status and education, as well as the “political” milieu including dictatorships, conflict, and war, which often determine the availability of health services. There is a close, interrelated association between undernutrition and poverty in developing countries.

Figure 15.1 illustrates this relationship, also showing some of the mechanisms responsible for perpetuating the relationship over generations. 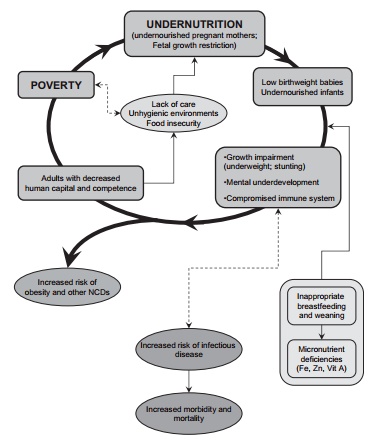 Approximately 243 million adults in developing countries are severely undernourished, with a body mass index less than 17 kg/m2. This means that high proportions of especially Asian and African preg-nant women are undernourished. Intrauterine (fetal) growth retardation is common in these women, leading to low birthweight babies (weight at full term less than 2500 g). Almost a quarter of newborns in the developing world (30 million of the 126 million babies born each year) have low birth weights compared with only 2% in the developed world. These babies, espe-cially when exposed to inappropriate breastfeeding and weaning practices, leading to further nutritional insults, have growth impairment and mental under-development. In addition, because of undernutrition, their immune systems are compromised. The result is stunted children that cannot benefit optimally from education and with an increased risk of infectious disease. In 2000, more than 150 million preschool children in the developing world were underweight, while approximately 200 million were stunted.

Figure 15.1 also shows that these physically and mentally underdeveloped children eventually develop into adults with “decreased human capital” and decreased competence. These adults are often not able to create enabling environments for themselves or their children to escape poverty and undernutrition in the next generation. But moreover, these “under-developed” adults are at increased risk of obesity and other NCDs because of early programming (possibly through epigenetic or DNA methylation changes) in the undernourished fetus. It is especially when these adults are exposed to low micronutrient quality and high energy-dense diets that they rapidly become overweight and obese. This phenomenon explains to a certain extent the coexistence of under- and over-nutrition in the same household with undernour-ished, wasted, and stunted children being cared for by an overweight or obese mother or care-giver.

Obesity and other NCDs are increasingly becoming major public health problems in the developing world. The WHO estimates that almost 80% of all deaths worldwide that are attributable to NCDs are already occurring in developing countries. A disturb-ing observation is that they often occur at younger ages than in the developed world. Obesity and other NCDs have similar biological risk factors in devel-oped and developing countries (and will not be dis-cussed in detail here). However, the context in which they develop may differ, being linked with fetal and infant undernutrition. Also, underdevelopment and a lack of resources in developing countries limit the availability of diagnostic and therapeutic care of people suffering from NCDs, leading to increased morbidity and mortality.

The other two groups of nutrition-related diseases in developing countries are nutrient deficiency diseases and infectious diseases, which will now be briefly discussed.

It is estimated that nearly 30% of humanity suffer from one or more forms of malnutrition. About 60% of the approximately 11 million deaths each year of children aged under 5 years in the developing world are associated with malnutrition. In addition to the undernutrition related to poverty, hunger, and food insecurity, leading to stunted physical and mental development, specific nutrient deficiencies are causes of specific diseases.

Nutrition is a major determinant of the human body’s defense against infectious diseases. Optimal nutrition is necessary for the integrity of the physical barriers (skin, epithelium) against pathogens. Specific nutrients furthermore play important roles in defining acquired immune function (both humoral and cell-mediated responses) and to influence, modulate, or mediate inflammatory processes, the virulence of the infectious agent, and the response of cells and tissues to hypoxic and toxic damage.

The immune system and the influence of malnutrition on its functions are discussed in detail in the clinical nutrition textbook of the series. Given the high prevalence of malnutrition (undernutrition) in developing countries, it is not surprising that infec-tious diseases are still dominating mortality statistics in these countries. In children under 5 years of age these are diarrhea and common childhood illnesses in which malnutrition could lead to premature childhood deaths. In some developing countries, children die of AIDS-related diseases. HIV/AIDS is an infectious disease that has pandemic proportions in developing countries. It will be discussed in more detail here to illustrate the complex role of nutrition in this tragic situation.