Anemias of blood loss.Acute blood loss may cause shock or death.

Anemias of blood loss.Acute blood loss may cause shock or death. If the patient sur-vives, the resulting hemodilution caused by shift of water from the interstitium will lower the hematocrit. There will be a marked reticulocytosis in 5–7 days. Chronic blood loss, such as from the gastrointestinal tract or from the gynecologic system, may result in iron deficiency anemia.

·            In intravascular (IV) hemolysis, release of hemoglobin into the blood causes hemoglobinemia and hemoglobinuria; increased bilirubin from erythrocytes causes jaundice and an increased risk of pigment (bilirubin) gallstones. The hemoglobin may be oxidized to methemoglobin, which causes methemoglo-binemia and methemoglobinuria. Markedly decreased (because they have been used up) hemoglobin-binding proteins in the blood, such as haptoglobin and hemopexin, are characteristic. No splenomegaly is seen. 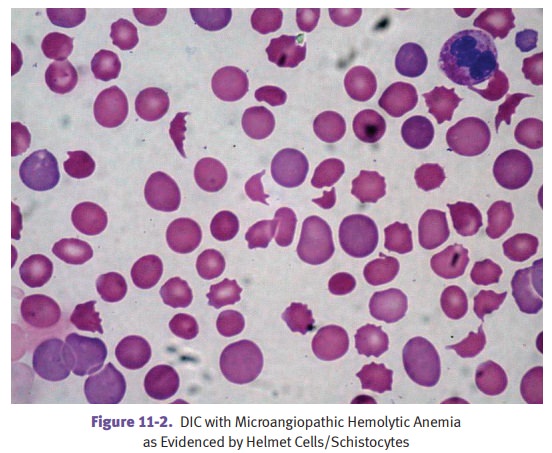 Sickle cell disease is an inherited blood disorder leading to the formation of hemo-globin S and increased propensity for the affected red blood cells to become sickle-shaped and occlude small vessels. The genetic abnormality is a single nucleotide change that causes valine (neutral) to replace normal glutamic acid (acidic) at the sixth position of the β-globin chain. This biochemical change then makes a criti-cal point on the surface of the hemoglobin molecule become hydrophobic, making it feel “sticky” to an adjacent hemoglobin molecule, thereby favoring hemoglobin precipitation in crystalline form.

Heterozygous (AS) genome causes sickle cell trait. About 8% of African Americans are heterozygous for hemoglobin S. Patients with sickle trait have fewer symptoms than those with sickle disease, and also have resistance to Plasmodium falciparum infection (malaria), which may be why the disease has remained in the human genetic pool. Homozygous (SS) genome causes clinical disease (sickle cell anemia). 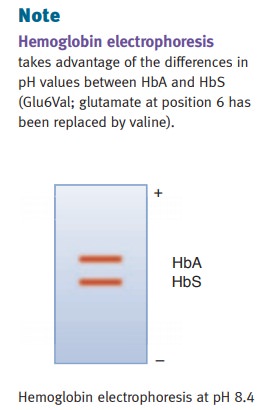 Clinical features include increased erythrocyte destruction which causes a severe hemolytic anemia, accompanied by erythroid hyperplasia in the bone marrow and increased bilirubin leading to jaundice and gallstone (pigment) formation. Capillary thrombi result from sickle cells blocking small vessels and may cause vaso-occlusive (painful) crises; hand-foot syndrome (swelling) in children; and autosplenectomy, which is seen in older children and adults. Howell-Jolly bodies will appear in periph- eral blood after autosplenectomy, and the lack of a functional spleen predisposes to increased incidence of infections (encapsulated organisms), increased incidence of Salmonella osteomyelitis (leg pain), leg ulcers, and risk of aplastic crisis (especially with parvovirus B19 infection). Emergencies that may occur include priapism and acute chest syndrome. For testing, hemoglobin electrophoresis is used to diagnose the disease, though genetic testing can be performed on amniotic fluid for prenatal diagnosis. Newborn screening is now mandatory in the United States and is commonly performed via high performance liquid chromatography. Treatment is hydroxyurea (to increase hemoglobin F) and hematopoietic stem cell transplantation.

Glucose-6-phosphate dehydrogenase deficiency (G6PD) is a genetic disorder affect-ing the hexose monophosphate shunt pathway. It results in decreased levels of the antioxidant glutathione (GSH), leaving erythrocytes sensitive to injury by oxidant stresses leading to hemolysis. In some variants, G6PD is not due to decreased synthe-sis but rather to defective protein folding, resulting in a protein having a decreased half-life. The condition has X-linked inheritance.

·            In African Americans (A–type) with G6PD, the hemolysis is secondary to acute oxidative stress, such as oxidative drugs (primaquine, sulfonamides, anti-tuberculosis drugs), and more typically by viral or bacterial infections. The hemolysis is intermittent (even if the offending drug is continued) because only older erythrocytes have decreased levels of glucose-6-phosphate dehy-drogenase.

·            In individuals with G6PD of Mediterranean type, the disease is associated with favism due to ingestion of fava beans; more severe hemolysis occurs because all erythrocytes have decreased glucose-6-phosphate dehydrogenase activity in that there is both decreased synthesis and decreased stability.

·            In both forms, the oxidation of hemoglobin forms Heinz bodies; these can-not be seen with normal peripheral blood stains (Wright-Giemsa) but can be visualized with supravital stains (methylene blue and crystal violet). The Heinz bodies are “eaten” by splenic macrophages (extravascular hemolysis), which may form “bite cell” erythrocytes that are visible on routine peripheral blood smears.

Hereditary spherocytosis (HS) is an autosomal dominant disorder caused by a defectinvolving ankyrin and spectrin in the erythrocyte membrane; this causes a decrease in the erythrocyte surface membrane (spherocytosis). Spherocytes are not flexible and are removed in the spleen by macrophages (i.e., extravascular hemolysis). This causes multiple problems, including splenomegaly with a mild to moderate hemolytic anemia, increased bilirubin and increased risk for jaundice and pigment gallstones secondary to chronic hemolysis, and increased risk for acute red-cell aplasia due to parvovirus B19 infection. Laboratory testing shows increased osmotic fragility and normal MCH with increased MCHC. Treatment is splenectomy and folic acid.

Autoimmune hemolytic anemia (AIHA) is most commonly warm AIHA, in whichthe antibodies are IgG that are usually against Rh antigens and are active at 37°C. Erythrocytes to which the antibodies attach are removed by splenic macrophages, which tends to induce splenomegaly as the spleen responds to the perceived need for increased phagocytosis.

Paroxysmal nocturnal hemoglobinuria (PNH) is a hemolytic anemia caused by anacquired somatic mutation of a gene (PIGA) that encodes an anchor for proteins (CD55 and CD59) in the cell membrane, causing complement-mediated lysis in red cells, white cells, and platelets. The condition causes episodes (paroxysms) of hemolysis at night.

Acidosis in vivo occurs during sleep (breathing slowly retains CO2) and exercise (lactic acidosis), and the acidosis in turn causes activation of complement. PNH is a clonal stem cell disorder that affects all blood cell lines, leading to pancytope-nia (anemia, leukopenia, and thrombocytopenia) that is apparent in the peripheral blood. Venous thrombosis may ensue.

Most PNH patients have mild disease and don’t require treatment, but a monoclonal antibody against complement protein C5 can be therapeutic.

Pyruvate kinase deficiency is the most common enzyme deficiency in the glycolyticpathway and involves the enzyme that normally converts phosphoenolpyruvate to pyruvate. Deficiency leads to decreased ATP with resulting damage to the erythro-cyte membrane. Clinically, there is a hemolytic anemia with jaundice from birth.

Hereditary elliptocytosis is a mild, hereditary, hemolytic anemia caused by a defectin spectrin. It is characterized by osmotically fragile ovoid erythrocytes (“ellipto-cytes”).

Aplastic anemia is the term used when marrow failure causes a pancytopenia ofthe blood. Idiopathic causes for aplastic anemia are most commonly seen; when the etiology is known, the aplastic anemia may be due to medications (alkylating agents, chloramphenicol), chemical agents (benzene, insecticides), infection (EBV, CMV, parvovirus, hepatitis), or whole body radiation (therapeutic or nuclear exposure).