Iron physiology. Functionally available iron is normally found in hemoglobin,myoglobin, and enzymes (catalase and cytochromes). Additionally, ferritin is the physiological storage form (plasma ferritin is normally close to the total body Fe), and hemosiderin (Prussian blue positive) is iron precipitated in tissues in the form of degraded ferritin mixed with lysosomal debris.

Iron is transported in the blood stream by transferrin. Transferrin saturation is reported as a percentage; it represents the ratio of the serum iron to the total iron-binding capacity, multiplied by 100.

Dietary deficiency of iron is seen in elderly populations, children, and the poor. Increased demand for iron is seen in children and pregnant women. Additionally, iron deficiency can develop because of decreased absorption, either due to general-ized malabsorption or more specifically after gastrectomy (due to decreased acid, which is needed for ferrous absorption) or when there is decreased small intesti-nal transit time (causing “dumping syndrome”). Iron deficiency can also be due to chronic blood loss due to gynecologic (menstrual bleeding) or gastrointestinal causes (in the United States, think carcinoma; in the rest of the world, think hookworm).

The sequence of events during iron deficiency is as follows:

·            The last stage is formation of microcytic/hypochromic anemia, with decreased MCV, decreased MCHC, and high RDW. 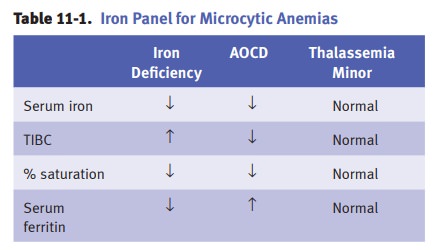 α-thalassemia.There are a total of 4 α- globin chain genes, 2 from each parent.α-thalassemia is due to gene deletions in the α-globin chain genes, and the clini-cal manifestations depend upon the number of genes that are affected. α chains are normally expressed prenatally and postnatally; therefore, there is prenatal and postnatal disease. In normal individuals, 4 α genes (αα/αα) are present and 100% of the α chains are normal.

·            In α-thalassemia trait, 2 deletions are present, and the total number of avail-able α genes is 2, which produce 50% of the needed α chains. The genotype cis (– –/αα) is seen in Asians, while the genotype trans (–α/–α) is seen in African Americans (offspring don’t develop hemoglobin H disease or hydrops fetalis).

·            Hemoglobin H disease is characterized by 3 deletions, with the number ofαgenes being 1 (– –/– α), which produces 25% of the normal α chains. There is increased Hb H (β4,) which forms Heinz bodies that can be seen with crystal blue stain.

·            β-thalassemia intermediacauses varying degrees of anemia, but no transfu-sions are needed.

§   Lifelong transfusions are required, which result in secondary hemo­ chromatosis.

§   Congestive heart failure (CHF) is the most common cause of death.

Sideroblastic anemia is a disorder in which the body has adequate iron stores, but isunable to incorporate the iron into hemoglobin. It is associated with ring sideroblasts (accumulated iron in mitochondria of erythroblasts) in bone marrow. Sideroblastic anemia may be either pyridoxine (vitamin B6) responsive or pyridoxine unrespon-sive; the latter is a form of myelodysplastic syndrome (refractory anemia with ring sideroblasts). The peripheral blood may show a dimorphic erythrocyte population. Laboratory studies show increased serum iron, ferritin, FEP, and % saturation of TIBC, with decreased TIBC.