Nocardia: Properties of the Bacteria

Nocardia are Gram-positive bacilli showing a branching,beaded, and filamentous form.

·           Nocardia are Gram-positive bacilli showing a branching,beaded, and filamentous form.

·           They stain poorly with Gram stain and appear to be Gram negative with intracellular Gram-positive granules.

·            Nocardia organisms like that of mycobacteria contain mycolicacid in their cell wall. They are usually weakly acid fast. Acid fastness is a property of Nocardia by which it can be differ-entiated from other similar bacteria, such as actinomycetes.

Nocardia are slow-growing bacteria and, therefore, needprolonged incubation of 7 days or more for their culture and isolation in the media. Nocardia on these media produces colonies varying from dry to waxy and white to orange in color.

Buffered charcoal yeast extract (BCYE) agar is a selective medium used for isolation of Nocardia from the specimens potentially contaminated with other bacteria.

Nocardia are catalase positive and they use sugars oxida-tively. They produce acid from glucose and they utilize urea. 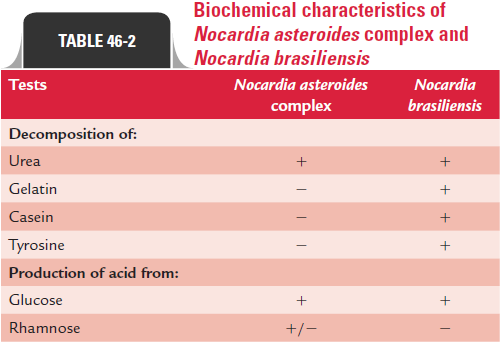 Biochemical reactions of different Nocardia species are summa-rized in Table 46-2.