Sodium nitroprusside and other nitrovasodilators relax both arteriolar and venous smooth muscle.

Sodium nitroprusside and other nitrovasodilators relax both arteriolar and venous smooth muscle. Its primary mechanism of action is shared with other nitrates (eg, hydralazine and nitroglycerin). As these drugs are metabolized, they release nitricoxide, which activates guanylyl cyclase. This enzymeis responsible for the synthesis of cyclic guanosine 3',5'-monophosphate (cGMP), which controls the phosphorylation of several proteins, including some involved in the control of free intracellular calcium and smooth muscle contraction.

Sodium nitroprusside is a potent and reliable antihy-pertensive. It is usually diluted to a concentration of 100 mcg/mL and administered as a continuous intra-venous infusion (0.5–10 mcg/kg/min). Its extremely rapid onset of action (1–2 min) and fleeting dura-tion of action allow precise titration of arterial blood pressure. A bolus of 1–2 mcg/kg minimizes blood pressure elevation during laryngoscopy but can cause transient hypotension in some patients. Thepotency of this drug requires frequent blood pres-sure measurements—or, preferably, intraarterial monitoring—and the use of mechanical infusion pumps. Solutions of sodium nitroprusside must be protected from light because of photodegradation.

After parenteral injection, sodium nitroprus-side enters red blood cells, where it receives an electron from the iron (Fe2+) of oxyhemoglobin. This nonenzymatic electron transfer results in an unstable nitroprusside radical and methemoglo-bin (Hgb Fe3+). The former moiety spontaneously decomposes into five cyanide ions and the active nitroso (N == O) group.

The cyanide ions can be involved in one of three possible reactions: binding to methemoglobin to form cyanmethemoglobin; undergoing a reaction in the liver and kidney catalyzed by the enzyme rho-danase (thiosulfate + cyanide → thiocyanate); or binding to tissue cytochrome oxidase, which inter-feres with normal oxygen utilization ( Figure 15–2).The last of these reactions is responsible for the development of acute cyanide toxicity,characterized by metabolic acidosis, cardiac arrhyth-mias, and increased venous oxygen content (as a result of the inability to utilize oxygen). Another early sign of cyanide toxicity is the acute resistance to the hypotensive effects of increasing doses of sodium nitroprusside (tachyphylaxis). It should be noted that tachyphylaxis implies acute tolerance to the drug following multiple rapid injections, as opposed to tolerance, which is caused by more chronic exposure. Cyanide toxicity is more likely 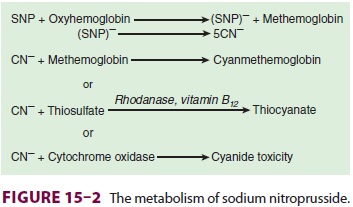 if the cumulative dose of sodium nitroprusside is greater than 500 mcg/kg administered at an infusion rate faster than 2 mcg/kg/min. Patients with cyanide toxicity should be mechanically ventilated with 100% oxygen to maximize oxygen availability. The phar-macological treatment of cyanide toxicity depends on increasing the kinetics of the two reactions by administering sodium thiosulfate (150 mg/kg over 15 min) or 3% sodium nitrate (5 mg/kg over 5 min), which oxidizes hemoglobin to methemoglobin. Hydroxocobalamin combines with cyanide to form cyanocobalamin (vitamin B12).

Thiocyanate is slowly cleared by the kidney. Accumulation of large amounts of thiocyanate (eg, in patients with renal failure) may result in a milder toxic reaction that includes thyroid dysfunction, muscle weakness, nausea, hypoxia, and an acute toxic psychosis. The risk of cyanide toxicity is not increased by renal failure, however. Methemoglo-binemia from excessive doses of sodium nitroprus-side or sodium nitrate can be treated with methylene blue (1–2 mg/kg of a 1% solution over 5 min), which reduces methemoglobin to hemoglobin.

The combined dilation of venous and arteriolar vascular beds by sodium nitroprusside results in reductions of preload and afterload. Arterial blood pressure falls due to the decrease in peripheral vas-cular resistance. Although cardiac output is usu-ally unchanged in normal patients, the reduction in afterload may increase cardiac output in patients with congestive heart failure, mitral regurgitation, or aortic regurgitation. In opposition to any favor-able changes in myocardial oxygen requirements are reflex-mediated responses to the fall in arterial blood pressure. These include tachycardia and increased myocardial contractility. In addition, dilation of cor-onary arterioles by sodium nitroprusside may result in an intracoronary steal of blood flow away from ischemic areas that are already maximally dilated.

Sodium nitroprusside does not directly interact with neuromuscular blocking agents. Nonetheless, a decrease in muscle blood flow caused by arterial hypotension could indirectly delay the onset and prolong the duration of neuromuscular blockade.