In patients with “older” vasculature, the wave arrives sooner, being conducted back by the noncompli-ant vasculature during late systole, which causes an increase in cardiac workload and a decrease in dia-stolic pressure (Figure 15–1). Thus, older patientsdevelop increased systolic pressure and decreased diastolic pressure. 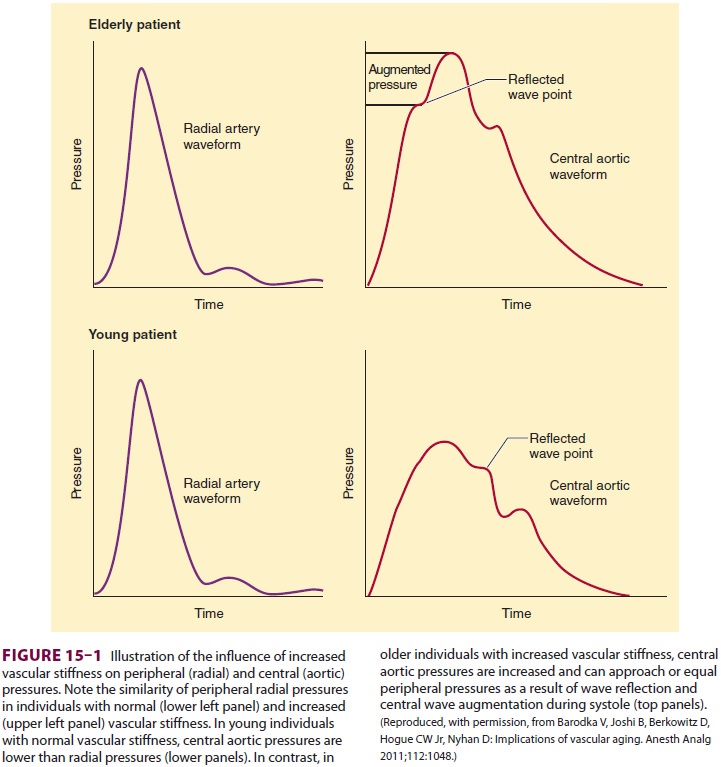 β-Blocker therapy should be maintained peri-operatively in patients who are being treated with β-blockers as a part of their routine medical regimen. Furthermore, according to the American College of Cardiology, β-blockers are also of potential benefit to patients with more than one cardiac risk factor, espe-cially those who are undergoing vascular surgery. However, the routine administration of high-dose β-blocker therapy may, in the absence of dose titra-tion, be harmful in patients not taking β-blockers. The American College of Cardiology/American Heart Association guidelines for β-blocker use peri-operatively should be closely followed. Adherence to such guidelines is used by third parties as a “quality” performance indicator for anesthesia delivery. Thus, anesthesia providers should periodically review recommendations regarding β-blocker therapy, as guidelines evolve as new evidence becomes available and older evidence is refuted. β-Blockers (esmolol, metoprolol, and others) were previously discussed for the treatment of transient perioperative hyper-tension and are routinely used by anesthesia provid-ers.