Neutrophils and Macrophages Defend Against Infections

It is mainly the neutrophils and tissue macrophages that attack and destroy invading bacteria, viruses, and other injurious agents.

Neutrophils and Macrophages Defend Against Infections

It is mainly the neutrophils and tissue macrophages that attack and destroy invading bacteria, viruses, and other injurious agents. The neutrophils are mature cells that can attack and destroy bacteria even in the circulating blood. Conversely, the tissue macrophages begin life as blood monocytes, which are immature cells while still in the blood and have little ability to fight infectious agents at that time. However, once they enter the tissues, they begin to swell—sometimes increasing their diameters as much as fivefold—to as great as 60 to 80 micrometers, a size that can barely be seen with the naked eye. These cells are now called macrophages, and they are extremely capable of com-bating intratissue disease agents.

White Blood Cells Enter the Tissue Spaces by Diapedesis. Neutrophils and monocytes can squeeze through the pores of the blood capillaries by diapedesis. That is, even though a pore is much smaller than a cell, a small portion of the cell slides through the pore at a time; the portion sliding through is momentarily constricted to the size of the pore, as shown in Figure 33–2. 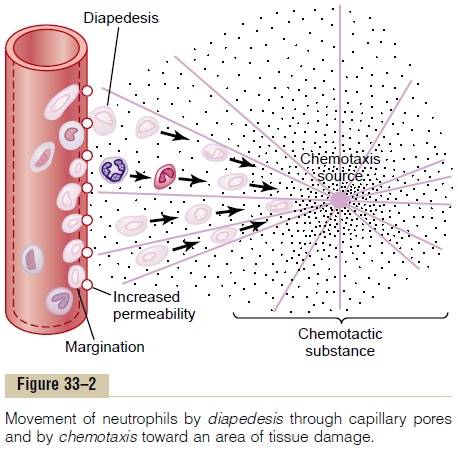 White Blood Cells Move Through Tissue Spaces by Ameboid Motion. Both neutrophils and macrophages can movethrough the tissues by ameboid motion. Some cells move at velocities as great as 40 mm/min, a distance as great as their own length each minute.

White Blood Cells Are Attracted to Inflamed Tissue Areas by Chemotaxis. Many different chemical substances in thetissues cause both neutrophils and macrophages to move toward the source of the chemical. This phe-nomenon, shown in Figure 33–2, is known aschemo-taxis. When a tissue becomes inflamed, at least a dozendifferent products are formed that can cause chemo-taxis toward the inflamed area. They include (1) some of the bacterial or viral toxins, (2) degenerative prod-ucts of the inflamed tissues themselves, (3) several reaction products of the “complement complex” activated in inflamed tissues, and (4) several reaction products caused by plasma clotting in the inflamed area, as well as other substances.

As shown in Figure 33–2, chemotaxis depends on the concentration gradient of the chemotactic sub-stance. The concentration is greatest near the source, which directs the unidirectional movement of the white cells. Chemotaxis is effective up to 100 microm-eters away from an inflamed tissue. Therefore, because almost no tissue area is more than 50 micrometers away from a capillary, the chemotactic signal can easily move hordes of white cells from the capillaries into the inflamed area.

The most important function of the neutrophils and macrophages is phagocytosis, which means cellular ingestion of the offending agent. Phagocytes must be selective of the material that is phagocytized; other-wise, normal cells and structures of the body might be ingested. Whether phagocytosis will occur depends especially on three selective procedures.

First, most natural structures in the tissues have smooth surfaces, which resist phagocytosis. But if the surface is rough, the likelihood of phagocytosis is increased.

Second, most natural substances of the body have protective protein coats that repel the phagocytes. Conversely, most dead tissues and foreign particles have no protective coats, which makes them subject to phagocytosis.

Third, the immune system of the body  develops antibodies against infec-tious agents such as bacteria. The antibodies then adhere to the bacterial membranes and thereby make the bacteria especially susceptible to phagocytosis. To do this, the antibody molecule also combines with the C3 product of the complement cascade, which is an additional part of the immune system discussed in the next. The C3 molecules, in turn, attach to receptors on the phagocyte membrane, thus initiating phagocytosis. This selection and phagocytosis process is called opsonization.

Phagocytosis by Neutrophils. The neutrophils enteringthe tissues are already mature cells that can immedi-ately begin phagocytosis. On approaching a particle to be phagocytized, the neutrophil first attaches itself to the particle and then projects pseudopodia in all direc-tions around the particle. The pseudopodia meet one another on the opposite side and fuse. This creates an enclosed chamber that contains the phagocytized par-ticle. Then the chamber invaginates to the inside of the cytoplasmic cavity and breaks away from the outer cell membrane to form a free-floating phagocytic vesicle (also called a phagosome) inside the cytoplasm. A single neutrophil can usually phagocytize 3 to 20 bac-teria before the neutrophil itself becomes inactivated and dies.

Phagocytosis by Macrophages. Macrophages are the end-stage product of monocytes that enter the tissues from the blood. When activated by the immune system as described, they are much more power-ful phagocytes than neutrophils, often capable of phagocytizing as many as 100 bacteria. They also have the ability to engulf much larger particles, even whole red blood cells or, occasionally, malarial parasites, whereas neutrophils are not capable of phagocytizing particles much larger than bacteria. Also, after digest-ing particles, macrophages can extrude the residual products and often survive and function for many more months.

Once Phagocytized, Most Particles Are Digested by Intracellu-lar Enzymes. Once a foreign particle has been phagocy-tized, lysosomes and other cytoplasmic granules in the neutrophil or macrophage immediately come in contact with the phagocytic vesicle, and their mem-branes fuse, thereby dumping many digestive enzymes and bactericidal agents into the vesicle. Thus, the phagocytic vesicle now becomes a digestive vesicle,and digestion of the phagocytized particle begins immediately.

Both neutrophils and macrophages contain an abundance of lysosomes filled with proteolyticenzymes especially geared for digesting bacteriaand other foreign protein matter. The lysosomes of macrophages (but not of neutrophils) also contain large amounts of lipases,which digest the thick lipid membranes possessed by some bacteria such as the tuberculosis bacillus.

Both Neutrophils and Macrophages Can Kill Bacteria. Inaddition to the digestion of ingested bacteria in phagosomes, neutrophils and macrophages contain bactericidal agents that kill most bacteria even whenthe lysosomal enzymes fail to digest them. This is espe-cially important, because some bacteria have protec-tive coats or other factors that prevent their destruction by digestive enzymes. Much of the killing effect results from several powerful oxidizing agents formed by enzymes in the membrane of the phago-some or by a special organelle called the peroxisome. These oxidizing agents include large quantities of superoxide (O2–), hydrogen peroxide(H2O2), and hydroxyl ions (–OH–), all of which are lethal to mostbacteria, even in small quantities. Also, one of the lysosomal enzymes, myeloperoxidase, catalyzes the reaction between H2O2 and chloride ions to form hypochlorite, which is exceedingly bactericidal.

Some bacteria, however, notably the tuberculosis bacillus, have coats that are resistant to lysosomal digestion and also secrete substances that partially resist the killing effects of the neutrophils and macrophages. These bacteria are responsible for many of the chronic diseases, an example of which is tuberculosis.