Neuromuscular blocking drugs relax skeletal muscles by disrupt-ing the transmission of nerve impulses at the motor end plate (the branching terminals of a motor nerve axon). 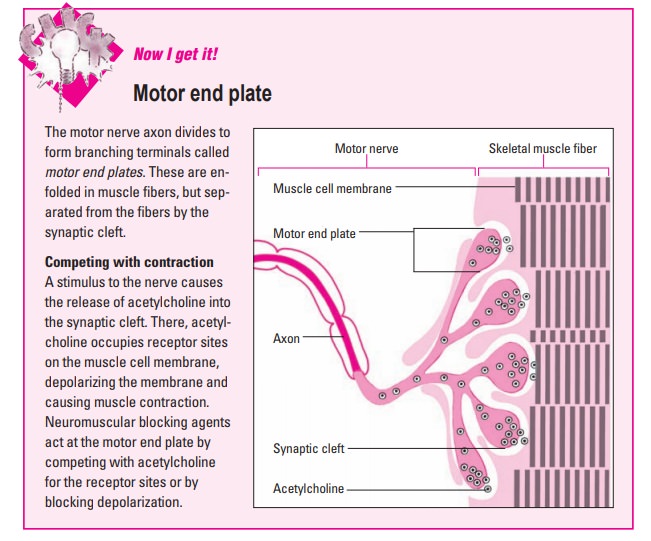 There are two main classes of natural and synthetic drugs used as neuromuscular blockers—nondepolarizing and depolarizing.

Nondepolarizing blocking drugs, also called competitive or stabi-lizing drugs, are derived from curare alkaloids and syntheticallysimilar compounds. They include:

Because nondepolarizing blockers are absorbed poorly from the GI tract, they’re administered parenterally. The I.V. route is pre-ferred because the action is more predictable.

These drugs are distributed rapidly throughout the body.

A variable but large proportion of the nondepolarizing drugs is ex-creted unchanged in urine. Some drugs, such as atracurium, pan-curonium, and vecuronium, are partially metabolized in the liver.

Nondepolarizing blockers compete with acetylcholine at the cholinergic receptor sites of the skeletal muscle membrane. This blocks acetylcholine’s neurotransmitter action, preventing the muscle from contracting.

From weakness to paralysis

The initial muscle weakness produced by these drugs quickly changes to a flaccid (loss of muscle tone) paralysis that affects the muscles in a specific sequence. The first muscles to exhibit flaccid paralysis are those of the eyes, face, and neck. Next, the limb, ab-domen, and trunk muscles become flaccid.

Lastly, the intercostal muscles (between the ribs) and diaphragm (the breathing muscle) are paralyzed. Recovery from the paralysis usually occurs in the reverse order.

Because these drugs don’t cross the blood-brain barrier, the patient remains conscious and can feel pain. Even though the patient is paralyzed, he’s aware of what’s happening to him and can experience extreme anxi-ety but can’t communicate his feelings.

Nondepolarizing blockers are used for intermediate or prolonged muscle relaxation to:

·                 prevent muscle injury during electroconvulsive therapy (ECT) (passing an electric current through the brain to treat depression) by reducing the intensity of muscle spasms.

These drugs alter the effects of nondepolarizing neuromuscular blockers:

·                 Drugs that alter the serum levels of the electrolytes calcium, magnesium, or potassium also alter the effects of the nondepolar-izing blockers.

·                 The anticholinesterases (neostigmine, pyridostigmine, and edro-phonium) antagonize nondepolarizing blockers and are used as antidotes to them.

o       Concurrent use of corticosteroids may result in prolonged mus-cle weakness.

Succinylcholine is the only therapeutic depolarizing blockingdrug. Although it’s similar to the nondepolarizing blockers in its therapeutic effect, its mechanism of action differs. Succinyl-choline acts like acetylcholine, but it isn’t inactivated by cholinesterase. It’s the drug of choice when short-term muscle re-laxation is needed.

Because succinylcholine is absorbed poorly from the GI tract, the preferred administration route is I.V.; the I.M. route can be used, if necessary.

Succinylcholine is hydrolyzed in the liver and plasma by the en-zyme pseudocholinesterase, producing a metabolite with a nonde-polarizing blocking action. Succinylcholine is excreted by the kid-neys, with a small amount excreted unchanged.

After administration, succinylcholine is rapidly metabolized, but at a slower rate than acetylcholine. As a result, succinylcholine re-mains attached to receptor sites on the skeletal muscle membrane for a longer period of time. This prevents repolarization of the mo-tor end plate and results in muscle paralysis.

Succinylcholine is the drug of choice for short-term muscle relax-ation, such as during intubation and ECT.

The action of succinylcholine is potentiated by a number of anes-thetics and antibiotics. In contrast to their interaction with nonde-polarizing blockers, anticholinesterases increase succinylcholine blockade. (See Adverse reactions to succinylcholine.)