Mycobacterium tuberculosis: Properties of the Bacteria

·           M. tuberculosis organisms are straight or slightly curved rodsoccurring singly, in pairs, or in small clumps.

·           They measure about 3 3 0.3 mm in size; sometimes long fila-mentous forms are also seen. M. bovis is usually shorter and stouter than M. tuberculosis.

·           They are Gram positive but are difficult to stain. They stain poorly with Gram staining.

Acid fastness of bacteria: M. tuberculosisis acid fast andalcohol fast; it resists decolorization by 20% sulfuric acid and absolute alcohol. This acid-fast staining is the most important property of the bacteria and is used widely for identification of the bacteria.

Ziehl–Neelsen (ZN)-staining procedure is used to demon-strate acid fastness of the bacteria. With this stain, M. tuberculosis stains bright red, while the tissue cells and other organisms are stained blue. These bacilli can also be stained by Auramine O stain and examined under a fluorescent microscope. They appear as bright fluorescent rods against a dark background.

Much’s granules are non–acid-fast form of tubercle bacilli demonstrated in the cold abscess pus, which when injected into susceptible animals could produce the disease.

M. tuberculosis is an obligate aerobe and characteristically growsvery slowly in media. Optimum temperature is 37°C, and the bacteria do not grow below 25°C or above 40°C. Optimum pH is 6.4–7.0. M. bovis is microaerophilic on primary isolation, which subsequently becomes aerobic on subculture.

M. tuberculosis is a slow-growing bacillus with an averagegeneration time of 14–15 hours. Prolonged incubation is therefore necessary for demonstrating growth of the bacteria. The colonies usually appear in almost 2 weeks, but sometimes require incubation up to 8 weeks to appear. M. tuberculosis can grow on a wide range of enriched solid and liquid media.

LJ medium:Of these media, LJ medium without starch ismost widely used and is also recommended by the Interna-tional Union against Tuberculosis (IUAT). The LJ medium consists of coagulated whole egg, asparagines, malachite green, mineral salt, and glycerol or sodium pyruvate. Mala-chite green inhibits growth of bacteria other than myco-bacterium. Addition of 0.75% glycerol enhances growth of M. tuberculosis, but is inhibitory to growth of M. bovis. On theLJ medium after 6–8 weeks of incubation, M. tuberculosis pro-duces yellowish or buff-colored colonies. They are tenacious and not easily emulsified (Fig. 41-1). 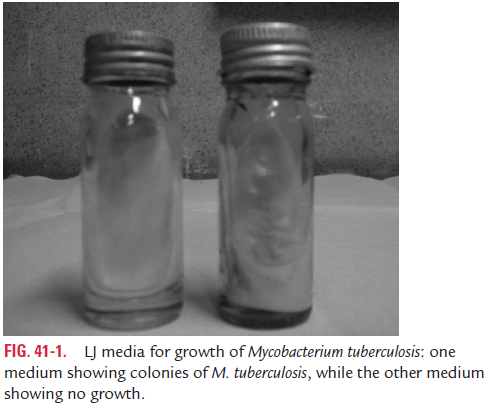 2.Culture in liquid media: The commonly used liquid mediainclude Soloac’s solutions, Dubos medium, and Middlebrook’s and Beck’s medium. In liquid media, M. tuberculosis produces growth that appears first at the bottom and then grips up to the sides and produces a surface pellicle that may extend along the sides above the medium. The bacteria in Dubos medium containing Tween 80 produce a diffuse growth. In glycerol broth, they form a whitish wrinkled pellicle on the surface and a granular deposit at the bottom. Virulent strains usually form long serpentine cords in liquid media. In contrast, avirulent strains produce a relatively dispersed growth in the medium. The liquid media are not used for routine culture of the bacilli.

They are usually used for (i) preparation of mycobacterial antigens for vaccines and (ii) to assess antibiotic sensitivity of M. tuberculosis.

·           M. tuberculosis is usually catalase positive. They lose their cat-alase activity when they become resistant to isoniazid (INH). Catalase-negative strains of M. tuberculosis are not virulent for guinea pigs.

·           M. tuberculosis is amidase positive. It produces amidaseenzymes, such as nicotinamidase and pyrazinamidase, which split various amide substrates.

·           M. tuberculosis as well as M. bovis are neutral red test positive.They have the property to bind neutral red in alkaline buffer solution.

Differential features of various strains of M. tuberculosis are summarized in Table 41-2.

Susceptibility to physical and chemical agents: Mycobacteriaare killed by heating at 60°C for 15–20 minutes. Killing of the bacteria is dependent on the nature of the clinical speci-men in which the bacteria are present. Mycobacteria in the sputum may survive for 20–30 hours, but in dried sputum protected from the sunlight they may survive longer, up to 6 months. In droplet nuclei, they may remain alive for 8–10 days. Bacteria are killed when exposed to direct sunlight for 2 hours, but they remain viable at room temperature for 6–8 months.

Tubercle bacilli are sensitive to formaldehyde and glutaral-dehyde. They are destroyed by tincture of iodine in 5 minutes and by 80% ethanol in 2–10 minutes. They are generally more resistant to chemical disinfectants than other nonspore-forming bacilli. They can survive exposure to 5% phenol, 15% sulfuric acid, 3% nitric acid, 5% oxalic acid, and 4% sodium hydroxide.