Mumbai, which lies on the western coast of India, is one of the world's largest and most crowded cities. It is also considered the commercial capital of India.

Mumbai, which lies on the western coast of India, is one of the world's largest and most crowded cities. It is also considered the commercial capital of India. Every day about 5.5 million commuters travel on the Mumbai suburban system, which is almost 50 per cent of the trips made by passengers on the entire railway system in India. During the peak hours almost 4500 passengers travel in one train as against the design capacity of 2700 passengers thereby creating an alarming situation.

At present, commuter traffic in Mumbai and its suburbs is served by the following five suburban railway corridors of Western and Central Railways.

(a)  A pair of lines from Borivli to Churchgate, designated local lines.

(b) A pair of lines between Virar and Churchgate, designated through lines.

(a)  A pair of lines between Mumbai VT and Kalyan, designated local lines.

(c)  A pair of lines, known as the harbour branch, between Mumbai VT and Chembur, with a chord line extending from Raoli Junction to Bandra and a

The salient features of the Mumbai suburban railway are presented in Table 29.4. 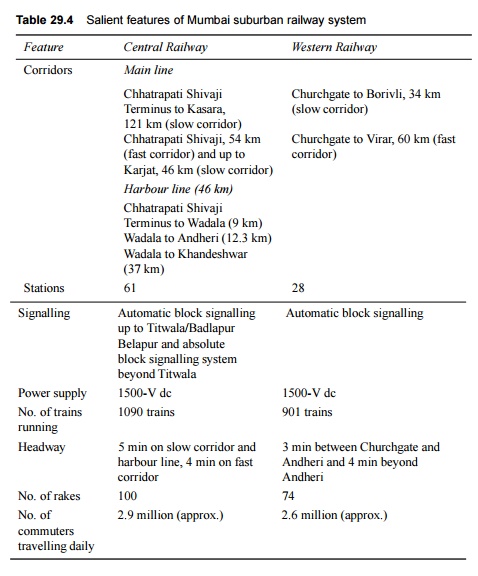 A metro rail system is being planned for Mumbai as well. The DMRC has submitted detailed project reports for three corridors to the Mumbai Metropolitan Regional Development Authority. The first corridor stretches from Versova to Ghatkopar (12 km) and has been approved by the Government of Maharashtra. The second corridor stretches from Colaba to Charkop via Bandra, is 36 km long, and 10 km of the route from Colaba to Mahalaxmi will be underground. The third corridor extends from Bandra to Mankhurd via Kurla and is 13 km long. Both the first and third corridors will be constructed on elevated ground.

Commuter traffic on the suburban railway system of Chennai is carried on the following sections.

The Chennai Beach to Tambaram section carries the bulk of commuter traffic. This section is electrified and the trains comprise an EMU stock. The Government of Tamil Nadu has recently approved the construction of Chennai metro corridors from Tiruvottiyur to the airport via Chennai central (31 km) and Ponnamallai to Chennai beach (13 km).