Most of the suburban traffic in Kolkata is borne by Eastern Railways for distances extending to over 100 km. On the South-Eastern Railway, the suburban sections extend from Howrah to Balichak, which lie at a distance of 92 km from each other. The railway system in Kolkata terminates at Howrah on one side and Sealdah on the other, both of which lie on the periphery of the central business district of Kolkata. In view of this, commuters have to cover the distances within the city by other modes of transport or on foot.

City buses carry a major portion of commuters from one place to another place. Besides the suburban rail and bus transport services, the tramways are an important mode of mass transport system in Kolkata. The Kolkata Tramway Company has about 400 trams. The underground metro railway in Kolkata started functioning from 24 October 1984 between Esplanade and Bhawanipore. It stretches from Dum Dum to Tollygunge and covers a route length of 16.45 km. The construction work of this underground railway was done by the cut and cover method in the open area. However, the driven shield tunnelling method was adopted wherever the metro alignment passed under residential buildings or a canal.

The construction of a metro is of a very complex nature requiring the application of several new technologies in the fields of civil, electrical, signalling, and telecommunication engineering. For the first time in India, engineers, backed by their own experience and supplemented by the knowledge gained through their studies abroad, have incorporated the following advanced technologies with regard to the construction of the Kolkata metro.

(a)  Cut and cover method of construction using diaphragm walls and sheet piles.

(b) Use of extensive decking to keep the traffic flowing over the cut while construction was in progress underneath.

(e)  Air conditioning and ventilation system for controlling the atmosphere of stations and tunnels.

The Kolkata metro, like all other mass rapid transit systems in the world, cannot be financially remunerative, as subsidies are inevitable in the operation of such an expansive system. However, introducing a system that covers the entire city has resulted in the following benefits to the public.

(a)  The social benefits of the Kolkata metro far outweigh the burden of the subsidies.

(b) It carries more than 0.5 million commuters per day in trains that follow each other at intervals of about 5 min during the peak hours.

(c)  The commuters are assured of a pollution-free, safe, punctual, and comfortable journey.

The salient features of the Kolkata metro are listed in Table 29.3. 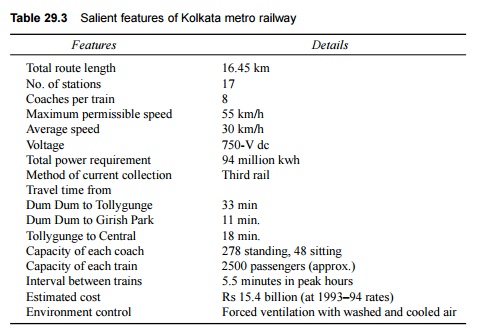 The expansion of the Kolkata metro is also being planned. The detailed project report for the East-West corridor from New Dass Nagar to Salt Lake Sector 5 has been submitted to the State Government by the DMRC. The corridor is 16 km long with 9 km of underground section. An interchange has been proposed for the crossing of the N-S line at Central Station. The corridor will pass below the Hugli river at a depth of about 30 m from the ground level.