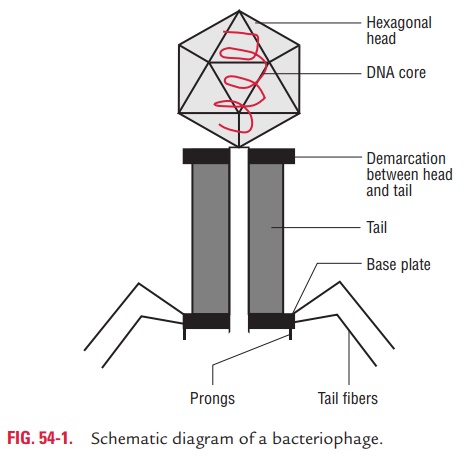 Most of the phages consist of single, linear, and double-stranded DNA genome.

Most of the phages consist of single, linear, and double-stranded DNA genome (Fig. 54-1). This genome is surrounded by a protein coat known as phage capsid. Large phages usually consist of a head and a tail. The head encloses the genome, and the tail is used as an organ of attachment as well as the conduit through which phage DNA passes into the host cell.

The best-studied phages are the T-even phages (T2, T4, T6, etc.) that infect the bacteria Escherichia coli. These phages are tradition-ally considered as the prototype for describing the morphology of bacteriophages. Phages are tadpole-shaped with a hexagonal head and a cylindrical tail. 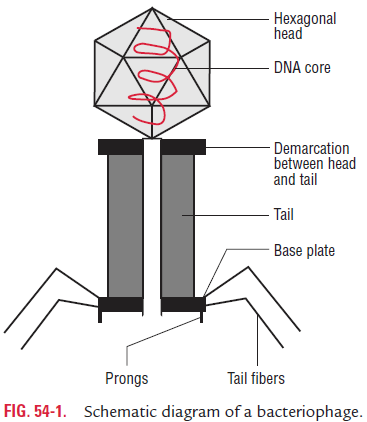 ·           Head: All phages contain a head structure, which can vary insize and shape. It is icosahedral (20 sides) or filamentous in shape. The size of the head measures between 28 and 100 nm in length. The capsid of bacteriophage head encloses a com-partment that contains the nucleic acid, which in most of the phages is a double-stranded DNA molecule. This DNA is protected against degradation by environmental nucleases by virtue of its location inside the bacteriophage head. However, a group of phages that specifically infect male strains of E.coli contains only RNA. The capsid or protein coat of a virusis composed of individual proteins known as capsomeres.

·           Tail: Many but not all phages have tails attached to thephage head. The tail consists of a hollow tube through which the nucleic acid passes during infection. The tail of complex phage like T4 is surrounded by a contractile sheath, which contracts during infection of the bacterium, and a terminal tail plate. The spikes and tail fibers both originate from the tail plate and specifically bind to receptors on the outer membrane of the bacterial cell wall.