·           Lytic cycle: also known as virulent cycle. In this cycle, intra-cellular multiplication of the phage results in the lysis of host bacteria, resulting in release of progeny virions.

·           Lysogenic cycle: also known as temperate cycle. In this cycle,phage DNA becomes integrated with the bacterial genome and replicates with the bacteria synchronously without causing any harm to the host cell.

The lytic cycle of a virulent bacteriophage shows the stages of (a) adsorption, (b) penetration, (c) synthesis of the phage com-ponents, and (d) release of progeny phages.

Adsorption: Adsorption is the first stage and is a specificprocess. This stage depends upon the susceptibility of the bac-terium to the specific phages. The specificity of the phage is determined by the presence of chemical receptors on surface of the bacteria. Adsorption occurs by random collision and is dependent upon concentration of both susceptible bacteria and the phage. It is a very rapid process and under optimal con-ditions is completed within minutes.

Adsorption is a specific biochemical reaction; hence bac-teriophages can infect only certain host bacterial cells. This process is so specific that it is used to classify bacteria within a given species. Bacterial strains having the same bacteriophage receptors are classified together. When the numbers of phages adsorbed is less, it may only affect the permeability of the mem-brane. Lysis of the host cell occurs only if an adequate number of phages invade the bacterium.

Infection usually does not occur in the absence of adsorption. However, infection of the bacterium directly by naked phage nucleic acid can occur, and this process is known as transfection.

Penetration: Adsorption is followed by penetration of phagenucleic acid into the bacterial cell. Phages with contractile tails behave as hypodermic syringes, injecting the phage DNA into the bacterial body through the hollow core (Fig. 54-2). Penetration through the cell wall is facilitated by an enzyme lysozyme present in the tail core that produces a hole on the bac-terial cell wall. The phage DNA then passes through the central tail core into the host cytoplasm, while the empty protein capsid remains attached to the cell surface. More than one phage can adsorb to a host cell and inject its DNA. If more bacteriophages are adsorbed, they make so many holes in the cell wall that it causes lysis of the cell, a phenomenon called lysis from without. 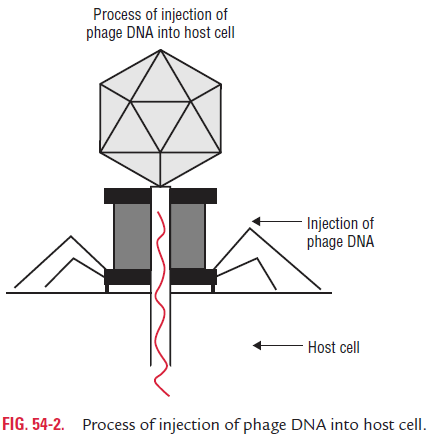 The empty head and tail of the phage, after penetration, remain outside the cell surface as the empty shell or ghost. After entry, the phage DNA is rearranged to a circular form, and this process is known as circulation of phage DNA.

Subsequently, late proteins are synthesized, which include (a) protein subunits of phage, (b) structural proteins necessary for the virion self-assembly, (c) enzymes involved in maturation, and (d) proteins used in the release of bacteriophages from the cell.

During this period, the synthesis of bacterial proteins, DNA, and RNA stops. It is noteworthy that phage DNA, head proteins, and tail proteins are synthesized separately in the bacterial cell.

Assembly and maturation: The protein subunits of thephage head and tail aggregate spontaneously to form the compact capsid. The DNA is condensed into a compact poly-hedral shape and packaged into the head. The assembly of the phage component into the mature infective phage particles is known as maturation.

Lytic cycle is enumerated by a plaque assay. A plaque is a clear area, which results from the lysis of bacteria. Each plaque arises from a single infectious phage.

Infection with every phage does not result in lysis of the host cells. Unlike virulent phages, which cause lysis of the host cell, some phages (such as temperate phages) integrate into the genome of the bacterial chromosome without causing any lysis of the bacteria. The integrated phage nucleic acid is known as the prophage. The prophage behaves like a segment of the host chromosome and multiplies synchronously with it. This phenomenon is known as lysogeny. The bacterium that carries a prophage within its genome is called lysogenic bacterium and such phages are called lysogenic or temperate phages.

Lysogeny: After infection by a temperate phage, the DNA fromthe temperate phage enters the host cell, which inside the cell forms a circle and by a single recombinant event becomes inte-grated into the DNA of the bacterium. The host bacterial cell, now called the lysogenic cell, replicates the phage DNA or pro-phage every time it divides. Sometimes, during the multiplica-tion of lysogenic bacteria, the phage may become excised from the bacterial chromosome. The excised prophage can initiate a new lytic cycle resulting in release of daughter phage parti-cles. These daughter phage particles also infect other bacterial cells and make them lysogenic. This is known as spontaneous induction of prophage.

All lysogenic bacteria on exposure to ultraviolet rays, hydrogen peroxide, and nitrogen mustard can also be induced to shift to the lytic cycle. A lysogenic bacterium is resistant to reinfection by the same or related phages. This is called as superinfection immu-nity. During lysogeny, the prophage confers certain new proper-ties on the lysogenic bacteria. This is known as lysogenic or phageconversion. The examples of phage conversions are as follows:

Toxigenicity of Corynebacterium diphtheriae:The presenceof prophage beta (b) is responsible for production of toxin in C. diphtheriae. Removal of the prophage makes the bacte-ria nontoxigenic. Similarly, nontoxigenic C. diphtheriae can be made toxigenic by lysogenization with b phage.

Toxicity  of  Clostridium  botulinum:  Toxin  production  in C. botulinum type C and D is determined by the presenceof phages CEb and DEb, respectively. Elimination of the phages abolishes the toxigenicity of the bacillus.

Transduction: Bacteriophages may act as carriers of genefrom one bacterium to another. This is known as transduc-tion. This phenomenon has been described in many bac-teria and is recognized as one of the main mechanisms of transfer of genetic material among bacteria in nature.

Table 54-1 summarizes the comparison of multiplication of bacteriophages and viruses.