Minerals and its Types in India

Mineral is a natural substance of organic or inorganic origin with definite chemical and physical properties.

Mineral is a natural substance of organic or inorganic origin with definite chemical and physical properties. The process of extracting mineral from the earth is known as mining. The mines near the earth crust are known as open pit mines while the deep mines are known as shaft mines.

The organisations associated with minerals in India are

1. The Geological Survey of India Headquarter is at Calcutta

4. The Ministry of Mines is responsible for the administration of all mines and minerals (Development and Regulation Act, 1957). 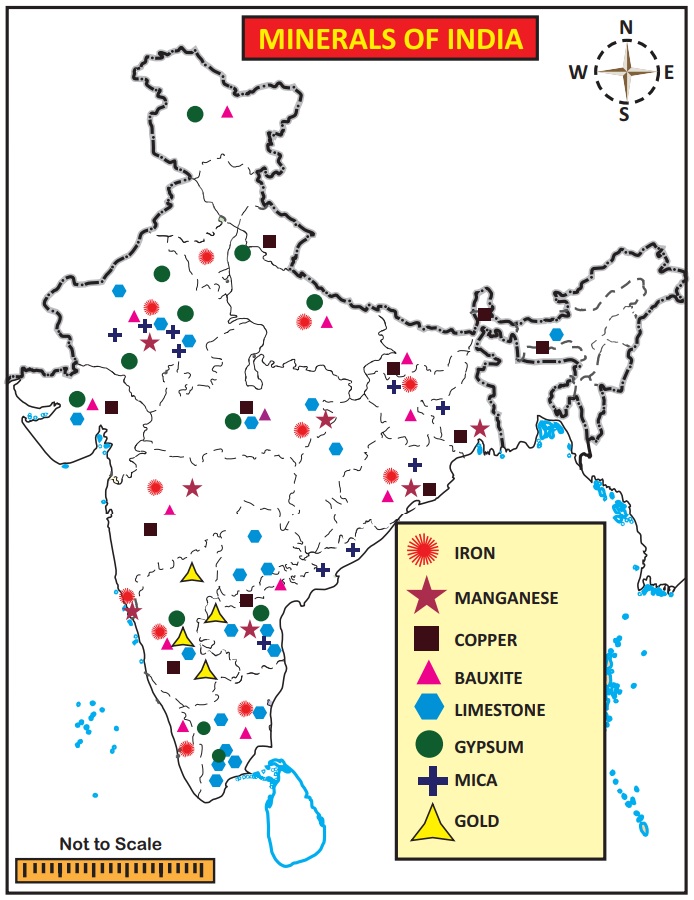 On the basis of chemical and physical properties, minerals are broadly grouped under two categories. They are metallic and non-metallic minerals.

Metallic minerals are the minerals which contain one or more metallic elements in them. Metallic minerals occur in rare, naturally formed concentrations known as mineral deposits. These deposits consist of a variety of valuable metals such as iron, manganese, copper, bauxite, nickel, zinc, lead, gold etc.

The iron is usually found in following form. 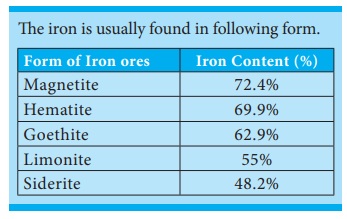 Iron ore is the most widely distributed elements of the earth crust, rarely occurs in a free state. It enters into the composition of many rocks and minerals especially from igneous and metamorphic rocks. The total recoverable reserves of iron ore in India are haematite and magnetite

SAIL (Steel Authority of India Limited): The Ministry of Steel is responsible for planning and development of iron and steel industry in India.

Manganese is a silvery grey element. It is very hard and brittle in nature. It is always available in combination with iron, laterite and other minerals. It is an important mineral used for making iron and steel and serves as basic raw material for alloying. It is the most important mineral for making iron and steel. Nearly 10 kg manganese is required for manufacturing one ton of steel. It is also used in the manufacturing of bleaching powder, insecticides, paints and batteries.

MOIL- Manganese Ore India Limited state-owned manganese ore mining company headquartered in Nagpur. With a market share of 50%. It was the largest producer of manganese ore in India.

Manganese deposits occur mainly as metamorphosed bedded sedimentary deposits. The largest deposits of manganese is found in Odisha followed by Karnataka, Madhya Pradesh, Maharashtra, Goa, Andhra Pradesh, Jharkhand, Rajasthan, Gujarat, Telengana and West Bengal together constitute about 2% of the India’s manganese resource. India is the fifth largest producer of manganese in the world.

Copper is the first metal that prehistoric man has started using for many purposes. Being flexible, it can be made into utensils of any shape. Brass and Bronze are obtained when the copper alloys with zinc and tin respectively. Copper has been commonly used for making cooking utensils and other objects of common utility. In modern days, it is extensively used in vast variety of electrical machinery, wires and cables

Largest reserves of copper ore is in the state of Rajasthan followed by Jharkhand and Madhya Pradesh. The states of Andhra Pradesh, Gujarat, Haryana, Karnataka, Maharashtra, Meghalaya, Nagaland, Odisha, Sikkim, Tamil Nadu, Telangana, Uttarakhand and West Bengal account for 7.9% of the total copper reserves of India.

Hindustan Copper Ltd is a Government-owned-corporation in the central public Enterprise under the Ministry of minies, India.

Bauxite is an oxide of aluminium; the name has been derived after the French word Le Baux.

National Aluminium Company Limited, abbreviated as NALCO, (incorporated 1981) has units in Odisha at places like Angul and Damanjodi. It was incorporated as a public sector enterprise of the Ministry of Mines, Government of India in 1981.

These minerals do not contain metal in them. Mica, limestone, gypsum, nitrate, potash, dolomite, coal, petroleum etc are the non-metallic minerals.

In ancient time, Mica was used in ayurvedic medicine. Mica became very popular with the development of electrical industry. Abhrak is a good quality mica. It is translucent, easily splitable into thin sheets, flat, colourless, elastic and incompressible. Mica is used in making of insulating properties, as it withstands high voltage and has low power loss factor. Since it is a non conductor of electricity, it is exclusively used in electrical goods. It is also used in making of lubricants, medicines, paints and varnishes.

The major deposits of mica are found in Andhra Pradesh, Rajasthan, Odisha and Jharkhand.

Limestone is associated with rocks composed of either calcium carbonate or the double carbonate of calcium and magnesium or mixture of both. Limestone also contains small quantities of silica, alumina, iron oxides, phosphorous and sulphur.

Gypsum is a hydrated sulphate of calcium which occurs as white, opaque or transparent minerals in beds of sedimentary rocks such as limestone, sandstone and shale. Gypsum is used in the manufacture of cement, fertilizers, wall board, plaster of paris and in soil conditioning. Rajasthan, Tamil nadu, Gujarat, Himachal Pradesh, Karnataka, Uttarakhand, Andhra Pradesh and Madhya Pradesh are the major producers.