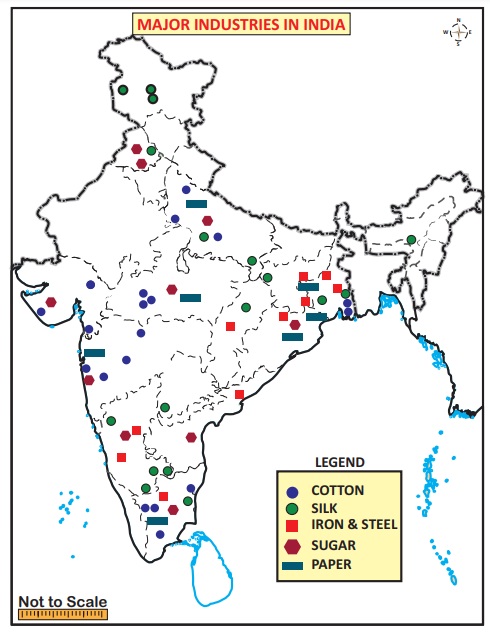 These industries draw their raw materials from agricultural sector. The following part discusses the agro based industries in India.

Textile is a broad term which includes cotton, jute, wool, silk and synthetic fibre textiles. This sector in India is the second largest in the world.

The first cotton textile mill was established at Fort Gloster near Kolkata in 1818.

Traditional sectors like hand loom, handicrafts and small power-loom units are the biggest source of employment for millions of people in rural and semi urban areas.

Currently, India is the third largest producer of cotton and has the largest loom arc and ring spindles in the world. At present, cotton textile industry is the largest organized modern industry of India.

Ginning is the process of separating cotton seed from cotton.

The higher concentration of textile mills in and around Mumbai, makes it as “Manchester of India”. Presence of black cotton soil in Maharastra, humid climate, presence of Mumbai port, availability of hydro power, good market and well developed transport facility favour the cotton textile industries in Mumbai.

The major cotton textile industries are concentrated in the states of Maharashtra, Gujarat, West Bengal, Uttar Pradesh and Tamil nadu. Coimbatore is the most important centre in Tamil nadu with 200 mills out of its 435 and called as “Manchester of South India”. Erode, Tirupur, Karur, Chennai, Thirunelveli, Madurai, Thoothukudi, Salem and Virudhunagar are the other major cotton textiles centres in the state.

Jute is a low priced fibre used mainly for making package materials like gunny bags. Today jute is blended with cotton and wool to produce textiles. This is the second important textile industry in India after cotton textiles. Jute is the golden fibre which meets all the standards of goods packing with its natural, renewable, bio degradable and eco-friendly products.

The first jute mill in India was established at Rishra near, Kolkata in 1854 by the English man George Auckland. India tops in the production of raw jute and jute goods and second in the export of jute goods next to Bangladesh. Jute production includes gunny bags, canvas, pack sheets, jute web, carpets, cordage, hessians and twines. Now jute is also being used in plastic furniture and insulation bleached fibres to blend with wool. It is also mixed with cotton to make carpet and blankets. The major jute producing areas are in West Bengal and concentrated along the Hooghly river within the radius of six kilometre of Kolkata. Titagarh, Jagatdat, Budge-Budge, Haora and Bhadreshwar are the chief centres of jute industry. Andhra Pradesh, Bihar, Uttar Pradesh, Assam, Chhattisgarh and Odisha are the other jute goods producing areas.

National jute board is headquarter at Kolkata.

Developmental activities related to silk technology. CSTRI was established in the year 1983 by the Central Silk Board, Ministry of Textiles, Govt. of India having head quarter at Bengaluru

India has been well known for the production of silk since the ancient times. India is the second largest producer of raw silk next only to China.

Sugar can be produced from sugar cane, sugar-beets or any other crop which have sugar content. In India, sugar cane is the main source of sugar. At present this is the second largest agro based industry of India after cotton textiles. India is the world’s second largest producer of sugar cane after Brazil. Sugar industry is decentralized and located near the sugarcane growing areas as they are weight loosing and bulky to transport.

Uttar Pradesh is the largest producer of sugar, producing about 50% of the country’s total. Other major producers are Maharashtra, Uttar Pradesh, Karnataka, Andhra Pradesh, Tamil nadu, Bihar, Punjab, Gujarat, Haryana and Madhya Pradesh states. These states account for more than 90% of the sugar mills and sugar production.

Forest provide us with different types of material which are used as raw material for certain industries like paper, lac, sports goods, plywood etc.

Paper Industry produces numerous types of papers that comes in various use such as sheet paper,paperboxes,tissues,paperbags,stationery, envelopes and printed-paper products such as books, periodicals, and newspapers. In India the Soft wood is the principal raw material used for making paper especially newsprint and high class printing papers. Paper is the pre-requisite for education and literacy and its use is an index of advancement in these two fields as well as the overall well being of the society. 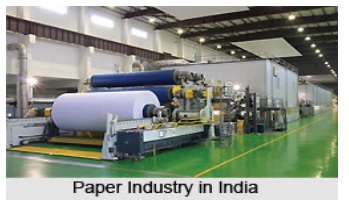 The first paper mill of India was started in 1812 at Serampore in West Bengal.

The first successful effort was made in 1867 with the setting up of the Royal Bengal paper mills at Ballyganj near Kolkata. The raw materials for paper industry includes wood pulp, bamboo, salai and sabai grasses, waste paper and bagasse. West Bengal is the largest producer of paper in the country followed by Madhya Pradesh, Odisha and Tamil nadu.

National Newsprint and Paper Mills (NEPA) is at Nepanagar in Burhanpur District of Madhya Pradesh.

a) Iron and steel industries

Iron and steel industry is called a basic metallurgical industry as its finished product is used as raw material by host of other industries. Several industries like engineering, heavy machines and machine tools, automobile, locomotives and railway equipment industries use iron and steel as their primary raw material. Due to this, the steel producing capacity of a country is generally taken as an indicator of its level of industrial development.

The first attempt to produce iron and steel unit was set up at Porto Novo in Tamil nadu in 1830.

The modernization of the industry was started in 1907 with the establishment of Tata Iron and Steel Company at Sakchi, now called Jamshedpur. Iron and steel industry of India is mainly concentrated in the states of Jharkhand, West Bengal and Odisha. Proximity to the coal fields of Jharia, Raniganj, Bokaro and Karanpura and the iron ore mines of Mayurbhanj, Keonjar and Brona are responsible for this. This area also has sufficient deposits of limestone, dolomite, manganese and silicon which are required for the industry.

India is set to emerge not only as a large domestic market for automobile manufacturers, but also as a crucial link in the global automotive chain. It is one of the most dynamic industrial groups in India.

The first automobile industry of India was started in 1947. The industry is the Premier Automobiles Ltd located at Kurla (Mumbai). It was followed by the Hindustan Motors Ltd at Uttarpara (Kolkata) in 1948. At present, India is the 7th largest producer of automobile manufacturers which include two wheelers, commercial vehicles, passenger car, jeep, scooty, scooters, motor cycles, mopeds and three wheelers. Major centres are at Mumbai, Chennai, Jamshedpur, Jabalpur, Kolkata, Pune, New Delhi, Kanpur, Bengaluru, Sadara, Lucknow and Mysuru.

Chennai is nicknamed as the “Detroit of Asia” due to the presence of major automobile manufacturing units and allied industries around the city. 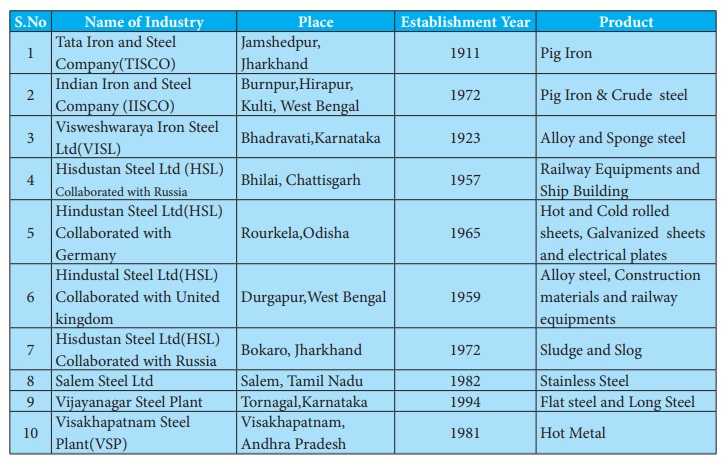 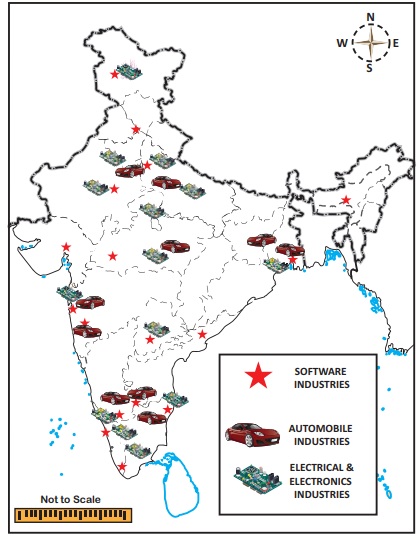 Bengaluru is the largest producer of electronic goods in India, hence it is called as the “Electronic Capital of India”. The other major producers of electronic goods centers are Hyderabad, Delhi, Mumbai, Chennai, Kolkata, Kanpur, Pune, Lucknow, Jaipur and Coimbatore.

Make in India program was launched in 2014 to put India on the world map as a major hub for global design and manufacturing.

In India, software industry began in 1970 with the entry of Tata Consultancy Services (TCS). Along with this, L & T, Infotech, i-Flex, Accenture, Cognizant, GalexE Solutions India Pvt Ltd and ITC Infotech are the major software industries in the country. At present, there are more than 500 software companies all over India. It exports software service to nearly 95 countries in the world.

Industries in India face many problems.

Some major problems are listed below.

• Shortage and fluctuation in Power Supply.

• Lack of technical and vocational training for employees. 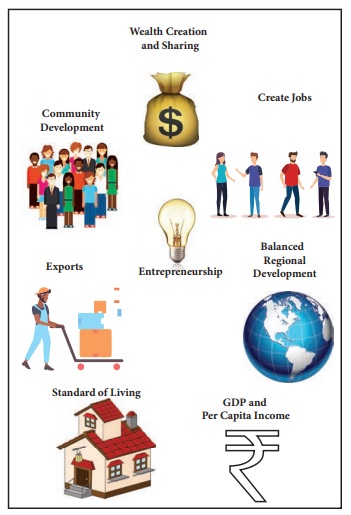