The resources from which the electricity generated are called energy resources. Electricity is an important component of our life. No day to day activity takes without the use of this energy. It is also the key factor for all economic activities and industrial development. Energy resources can be classified into renewable and non-renewable. Coal, petroleum, natural gas and nuclear minerals are the sources of non renewable energy. Water, sun light, wind, bio gas, tides etc., are the sources of renewable energy.

Coal is an inflammable organic substance composed mainly of hydrocarbons.

Coal is available in the form of sedimentary rocks. It is used in the generation of thermal power. It has close association with the industrial development of any country. Since it is a valuable one, it is called as “Black Gold”. Based on carbon content, it is classified in to the following types.

Coal is an important source of energy in India with its varied and innumerable uses. It can be converted into gas, oil, electricity and thermal power. Besides, it forms a basic raw material for the production of chemicals, dyes, fertilizers, paints, synthetic and explosives.

Indian coal is mostly associated with Gondwana series of rocks and is primarily found in Peninsular India. The states of Jharkhand, odisha, West Bengal and Madhya Pradesh alone account for nearly 90% of coal reserves of the country. About 2% of India’s coal is of tertiary type and is found mostly in Assam and Jammu & Kashmir.

The Ministry of coal has over all responsibility of determining policies and strategies in respect of exploration and development of coal resource in India. Coal India Limited (CIL), NLC India Limited (NLCIL) and Singareni Collieries Company limited (SCCL) are its public sector under takings.

b) Petroleum (or) Crude oil

The word petroleum has been derived from two Latin words petro (meaning – Rock) and oleum (meaning oil) . Thus petroleum is oil obtained from rocks of the earth. Therefore, it is also called mineral oil. Petroleum is an inflammable liquid that is composed of hydrocarbons which constitute 90- 95% of petroleum and the remaining is chiefly organic compounds containing oxygen, nitrogen, sulphur and traces of organ metallic compounds.

The Ministry of Petroleum and Natural Gas (MOP&NG) is a ministry of the Government of India. It is responsible for the exploration, production, refining, distribution, marketing, import, export, and conservation of petroleum, natural gas, petroleum products, and liquefied natural gas in India. 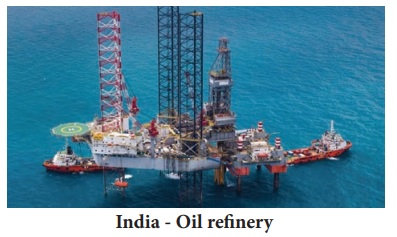 Petroleum is used as a source of power and fuel for automobiles, aeroplanes, ships and locomotives. Lubricants, kerosene, vaseline, tar, soap, terylene and wax are its by products. Oil in India is obtained from both from on-shore and off-shore areas. 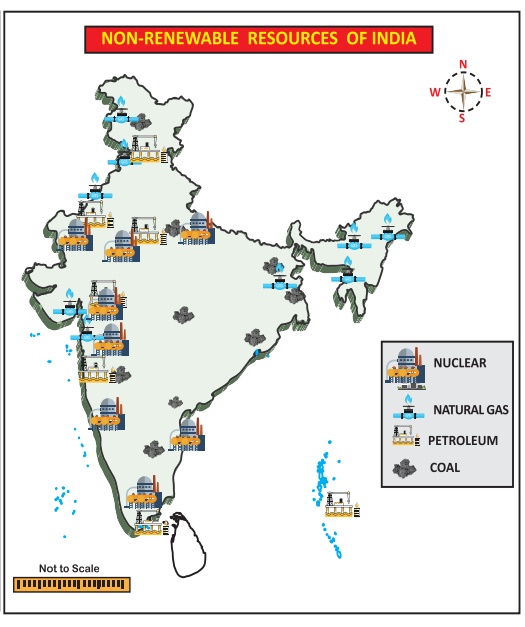 Natural gas usually accompanies the petroleum accumulations. It is naturally occurring hydro carbon gas mixture consisting primarily of methane, but commonly includes varying amounts of other higher alkanes and sometimes a small percentage of carbon dioxide, nitrogen and hydrogen sulphides. It is formed when layers of decomposed plants and animals are exposed to intense heat and pressure over thousands of years. It is used as a source of energy for heating, cooking and electricity generation. It is also used as fuel for vehicles and as a chemical feedstock in the manufacture of plastics and other commercially important organic chemicals.

GAIL (formerly known as Gas Authority of India Limited) is the largest state-owned natural gas processing and distribution company in India. It is headquartered in New Delhi.

India has a very large proportion of tertiary rock and alluvial deposits particularly in the extra peninsular India. These sedimentary rocks, which were once under the shallow seas, hold the possibility of harbouring oil and gas deposits. The highest concentration of natural gas is found in the Mumbai high and basseim oil fields. Gujarat, Assam, Neypaltur, Mangmadam in Thanjavur district in Tamil nadu, Tripura, Rajasthan, Arunachal Pradesh, Punjab, West Bengal are the other areas where natural gas reserves have been discovered.

Compressed natural gas (CNG) (methane stored at high pressure) is a fuel which can be used in place of gasoline, diesel fuel and propane/LPG. In comparison to other fuels, natural gas poses less of a threat in the event of a spill, because it is lighter than air and disperses quickly when released. Biomethane – cleaned-up biogas from anaerobic digestion or landfills – can be used. Natural gas run vehicles are increasingly used in Delhi, Ahmedabad, Mumbai, Pune, Kolkata Lucknow, Kanpur, Varanasi, etc.

The energy released during nuclear fission or fusion is used to generate electricity. Nuclear energy is generated mainly from the minerals of Uranium and Thorium. The first nuclear power station was setup at Tarapur near Mumbai in 1969. Later atomic reactors were installed at Rawatbhata (335 MW), near Kota in Rajasthan (100 MW), Kalpakkam (440 MW) and Kudankulam (2,000 MW) in Tamil nadu and Narora (235 MW) in Uttar Pradesh, Kaiga in (235 MW) in Karnataka and Kakarapara (235 MW) in Gujarat.

The Nuclear Power CorporationofIndiaLimited (NPCIL) is an Indian public sector undertaking based in Mumbai, Maharashtra. It is wholly owned by the Government of India and is responsible for the generation of nuclear power for electricity.

Power generated from water is termed as hydroelectricity. Hydro power is the energy harnessed from running water. Hydro power is considered as one of the most economic and non-polluting sources of energy. It contributes nearly 7% of global electricity production. The cost of production of hydroelectricity is relatively low, making it a competitive source of renewable energy. It is also a flexible mode of power generation as the quantity of production can either be increased or decreased very quickly adapting to changing demands.

The first hydro-electric power station in India was established at “Darjeeling” in 1897.

Solar Energy Corporation of India Limited is a Government of India Enterprise.Its head quarter is located at New Delhi.

Wind energy is extracted from air flow using wind turbines. It is a cheap and pollution free source of energy. Power from wind mills are used for pumping water and to sail propel ships. Wind power is plentiful, renewable, widely distributed, clean and produces no greenhouse gas emissions during operation. These plants occupy only a less space.

Tamil nadu has the largest installation of wind turbines in the country in the Aralvoimozhi area near Kanniyakumari is the largest concentrations of wind farm capacity at a single location in the world.

The development of wind power in India began in 1986 with first wind farms were set up in coastal areas of Gujarat (Okha), Maharashtra (Ratnagiri) and Tamil nadu (Thoothukudi) with 55 KW Vestas wind turbines. The capacity has significantly increased in the last few years. India has the fourth largest installed wind power capacity in the world.

The National Institute of Wind Energy (NIWE), Chennai was established in Tamil Nadu in 1998 as an autonomous institution under the administrative control of the Ministry of New and Renewable Energy. NIWE main activities include resource assessment testing and certification. 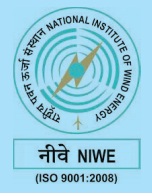 Bio energy may be obtained through bio-degradable materials like animal dung, kitchen wastes, water hyacinth, agricultural residues and city wastes etc. It is clean and cheap source of energy. Energy derived from biomass is mostly used for domestic purposes.

There are two main sources of ocean energy. They are Ocean tides and Ocean waves. The Gulf of Cambay is the best suited area for tidal energy. This is followed by Gulf of Kachch (1,000MW) and sunderbans (100MW).

An wave energy power plant of 150 KW(maximum) has been installed at vizhinjam near Thiruvananthapuram. An another plant of this kind has been set up near Andaman& Nicobar Islands. 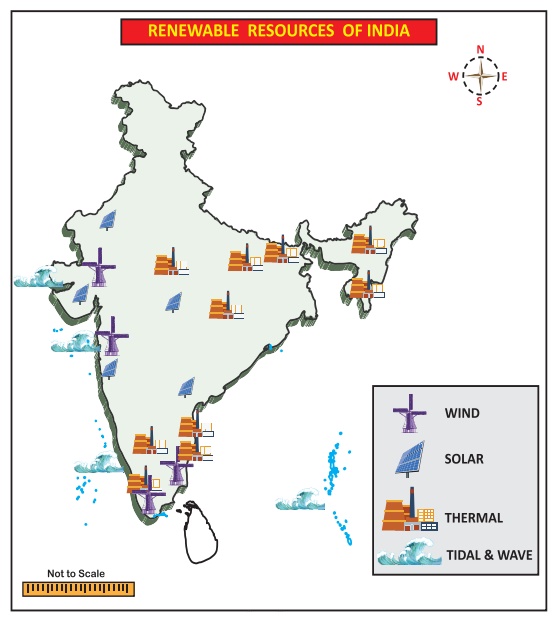