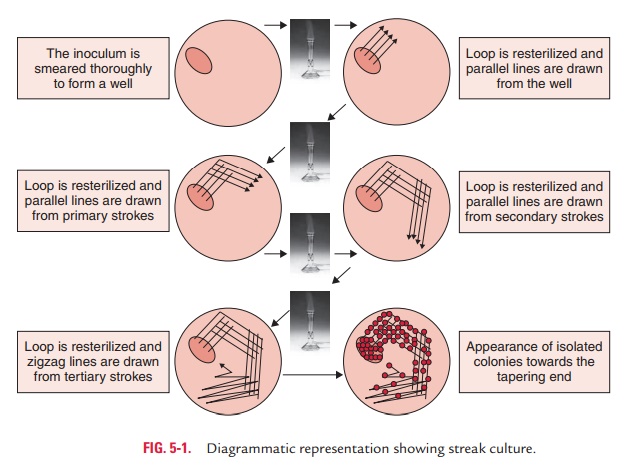 The lawn culture provides a uniform layer of bacterial growth on a solid medium. It is carried out by flooding the surface of the solid media plate with a liquid culture or suspension of bacteria, pipetting off the excess inoculum, and finally incubating the plate overnight at 37°C. Alternatively, the cul-ture plate may be inoculated by a sterile swab soaked in liquid bacterial culture or suspension and incubating overnight for demonstration of the bacterial colonies.

The pour-plate culture is used to determine approximate number of viable organisms in liquids, such as water or urine. It is used to quantitate bacteria in urine cultures and also to estimate the viable bacterial count in a suspension. This method is carried out in tubes, each containing 15 mL of molten agar. The molten agar in tubes is left to cool in a water bath at 45°C. The inoculum to be tested is diluted in serial dilution. Then 1 mL each of diluted inoculum is added to each tube of molten agar and mixed well. The contents of tubes are poured into sterile Petri dishes and allowed to set. After overnight incubation of these Petri dishes at 37°C, colonies are found to be distributed throughout the depth of the medium, which can be counted using a colony counter.

Stroke culture provides a pure growth of bacteria for carrying out slide agglutination and other diagnostic tests. It is carried out in tubes usually containing nutrient agar slopes.

Stab culture is prepared by stabbing the medium in tubes with a long, straight wire and incubating at 37°C.

Liquid culture is prepared in a liquid media enclosed in tubes, flasks, or bottles. The medium is inoculated by touching with a charged loop or by adding the inoculum with pipettes or syringes and incubating at 37°C, followed by subculture on to solid media for final identification.

A major disadvantage of liquid culture is that it does not provide pure culture of the bacteria and also the bacterial growth does not exhibit special characteristic appearances.

Anaerobic bacterial culture is a method used to grow anaer-obes from a clinical specimen. Culture and identification of anaerobes is essential for initiating appropriate treatment.

The failure to do so may have serious consequences, such as amputation, organ failure, sepsis, meningitis, and even death.