Methods Based on Chemical Kinetics: Instrumentation

Quantitative information about a chemical reaction can be made using any of the techniques described in the preceding.

Quantitative information about a chemical reaction can be made using any of the techniques described in the preceding. For reactions that are kineti- cally slow, an analysis may be performed without worrying about the possibility that significant changes in concentration occur while measuring the signal. When the reaction’s rate is too fast, which is usually the case, significant errors may be introduced if changes in concentration are ignored. One solution to this problem is to stop, or quench, the reaction by suitably adjusting experimental conditions. For example, many reactions involving enzymes show a strong pH dependency and may be quenched by adding a strong acid or strong base. Once the reaction is stopped, the concentration of the desired species can be deter- mined at the analyst’s convenience. Another approach is to use a visual indicator that changes color after the reaction occurs to a fixed extent. You may recall that this variable-time method is the basis of the so-called “clock reactions” com- monly used to demonstrate kinetics in the general chemistry classroom and labo- ratory. Finally, reactions with fast kinetics may be monitored continuously using the same types of spectroscopic and electrochemical detectors found in chro- matographic instrumentation.

Two additional problems for chemical kinetic methods of analysis are the need to control the mixing of the sample and reagents in a rapid and repro- ducible fashion and the need to control the acquisition and analysis of the signal. Many kinetic determinations are made early in the reaction when pseudo-zero- order or pseudo-first-order conditions are in effect. Depending on the rate of re- action, measurements are typically made within a span of a few milliseconds or seconds. This is both an advantage and a disadvantage. The disadvantage is that transferring the sample and reagent to a reaction vessel and their subsequent mixing must be automated if a reaction with rapid kinetics is to be practical. This usually requires a dedicated instrument, thereby adding an additional ex- pense to the analysis. The advantage is that a rapid, automated analysis allows for a high throughput of samples. For example, an instrument for the automated ki- netic analysis of phosphate, based on reaction 13.9, has achieved sampling rates of 3000 determinations per hour.

A variety of designs have been developed to automate kinetic analyses.6 The stopped-flow apparatus, which is shown schematically in Figure 13.8, has found use in kinetic determinations involving very fast reactions. Sample and reagents are loaded into separate syringes, and precisely measured volumes are dispensed by the action of a syringe drive. The two solutions are rapidly mixed in the mix- ing chamber before flowing through an observation cell. The flow of sample and reagents is stopped by applying back pressure with the stopping syringe. The back pressure completes the mixing, after which the reaction’s progress is moni- tored spectrophotometrically. With a stopped-flow apparatus, it is possible to complete the mixing of sample and reagent and initiate the kinetic measure- ments within approximately 0.5 ms. The stopped-flow apparatus shown in Figure 13.8 can be modified by attaching an automatic sampler to the sample sy- ringe, thereby allowing the sequential analysis of multiple samples. In this way the stopped-flow apparatus can be used for the routine analysis of several hun- dred samples per hour. 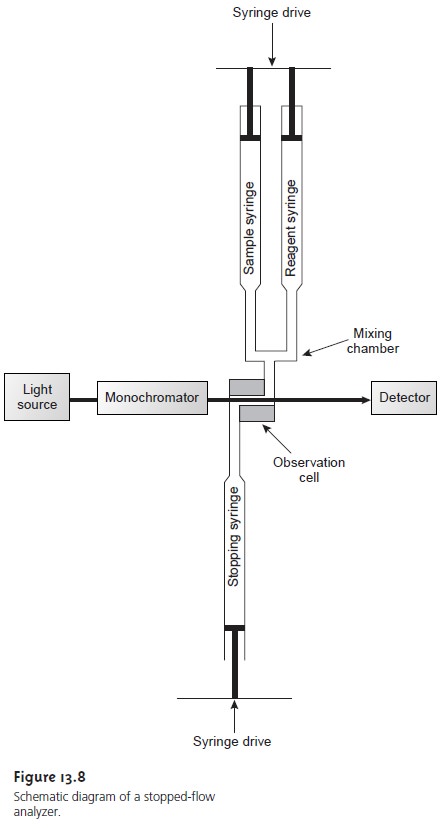 Another automated approach to kinetic analyses is the centrifugal analyzer, a partial cross section of which is shown in Figure 13.9. In this technique the sample and reagents are placed in separate wells oriented radially around a circu- lar transfer disk attached to the rotor of a centrifuge. As the centrifuge spins, the sample and reagents are pulled by the centrifugal force to the cuvette, where mixing occurs. A single optical source and detector, located above and below the transfer disk’s outer edge, allows the absorbance of the reaction mixture to be measured as it passes through the optical beam. The centrifugal analyzer allows a number of samples to be analyzed simultaneously. For example, if a transfer plate contains 30 cuvettes and rotates with a speed of 600 rpm, it is possible to collect 10 data points per sample for each second of rotation.

The ability to collect kinetic data for several hundred samples per hour is of little consequence if the analysis of the data must be accomplished manually. Be- sides time, the manual analysis of kinetic data is limited by noise in the detector’s signal and the accuracy with which the analyst can determine reaction rates from tangents drawn to differential rate curves. Not surprisingly, the development of automated kinetic analyzers was paralleled by the development of analog and digital circuitry, as well as computer software for the smoothing, on-line integra- tion and differentiation, and analysis of kinetic signals.