Methods Based on Chemical Kinetics: Theory and Practice

Every chemical reaction occurs at a finite rate and, therefore, can potentially serve as the basis for a chemical kinetic method of analysis.

Every chemical reaction occurs at a finite rate and, therefore, can potentially serve as the basis for a chemical kinetic method of analysis. To be effective, however, the chemical reaction must meet three conditions. First, the rate of the chemical reac- tion must be fast enough that the analysis can be conducted in a reasonable time, but slow enough that the reaction does not approach its equilibrium position while the reagents are mixing. As a practical limit, reactions reaching equilibrium within 1 s are not easily studied without the aid of specialized equipment allowing for the rapid mixing of reactants.

A second requirement is that the rate law for the chemical reaction must be known for the period in which measurements are made. In addition, the rate law should allow the kinetic parameters of interest, such as rate constants and concen- trations, to be easily estimated. For example, the rate law for a reaction that is first order in the concentration of the analyte, A, is expressed as

where k is the reaction’s rate constant. As shown in Appendix 5,* the integrated form of this rate law

provides a simple mathematical relationship between the rate constant, the reac- tion’s elapsed time, t, the initial concentration of analyte, [A]0, and the analyte’s concentration at time t, [A]t.

Unfortunately, most reactions of analytical interest do not follow the simple rate laws shown in equations 13.1 and 13.2. Consider, for example, the following re- action between an analyte, A, and a reagent, R, to form a product, P

The integrated form of the rate law for equation 13.4, however, is still too compli- cated to be analytically useful. We can simplify the kinetics, however, by carefully adjusting the reaction conditions.4 For example, pseudo-first-order kinetics can be achieved by using a large excess of R (i.e. [R]0 >> [A]0), such that its concentration remains essentially constant. Under these conditions

A final requirement for a chemical kinetic method of analysis is that it must be possible to monitor the reaction’s progress by following the change in concentra- tion for one of the reactants or products as a function of time. Which species is used is not important; thus, in a quantitative analysis the rate can be measured by moni- toring the analyte, a reagent reacting with the analyte, or a product. For example, the concentration of phosphate can be determined by monitoring its reaction with Mo(VI) to form 12-molybdophosphoric acid (12-MPA).

We can monitor the progress of this reaction by coupling it to a second reaction in which 12-MPA is reduced to form heteropolyphosphomolybdenum blue, PMB,

A useful scheme for classifying chemical ki- netic methods of analysis is shown in Figure 13.3. Methods are divided into two main categories. For those methods identified as direct-computation methods, the concentration of analyte, [A]0, is calculated using the appropriate rate law. Thus, for a first-order reaction in A, equation 13.2 is used to determine [A]0, provided that values for k, t, and [A]t are known. With a curve-fitting method, regression is used to find the best fit between the data (e.g., [A]t as a function of time) and the known mathematical model for the rate law. In this case, kinetic parameters, such as k and [A]0, are adjusted to find the best fit. Both categories are further subdivided into rate methods and integral methods. 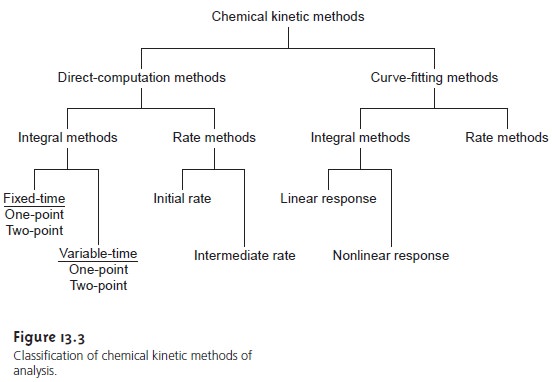 Integral methods for analyzing kinetic data make use of the integrated form of the rate law. In the one-point fixed-time integral method, the concentration of analyte is determined at a single time. The initial con- centration of analyte, [A]0, is calculated using equation 13.2, 13.6, or 13.8, depend- ing on whether the reaction follows first-order, pseudo-first-order, or pseudo-zero- order kinetics. The rate constant for the reaction is determined in a separate experiment using a standard solution of analyte. Alternatively, the analyte’s initial concentration can be determined using a calibration curve consisting of a plot of [A]t for several standard solutions of known [A]0. 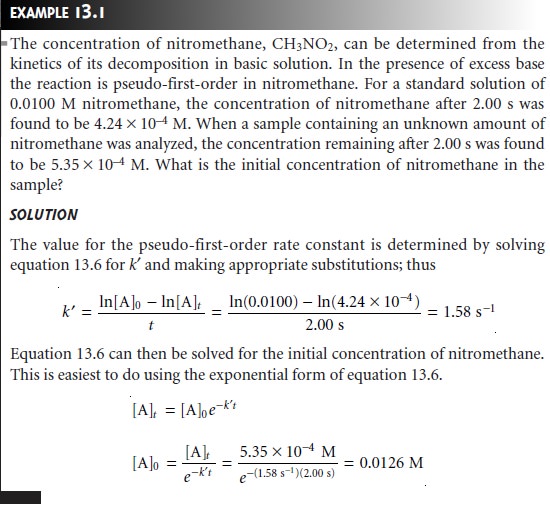 is monitored, then the concentration of the analyte at time t is

since the stoichiometry between the analyte and product is 1:1. Substituting equa- tion 13.10 into equation 13.6 gives

which is simplified by writing in exponential form 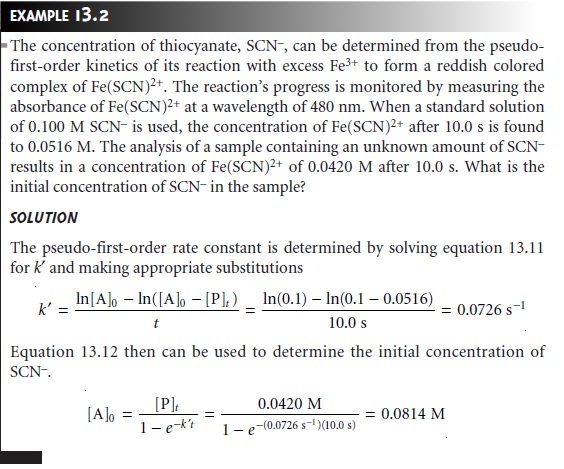 The rate constant for the reaction can be calculated from equation 13.14 by measur- ing [A]t1 and [A]t2 for a standard solution of analyte. The analyte’s initial concentra- tion also can be found using a calibration curve consisting of a plot of ([A]t1 – [A]t2) versus [A]0.

Fixed-time integral methods are advantageous for systems in which the signal is a linear function of concentration. In this case it is not necessary to determine the concentration of the analyte or product at times t1 or t2, because the relevant con- centration terms can be replaced by the appropriate signal. For example, when a pseudo-first-order reaction is followed spectrophotometrically, when Beer’s law

where (Abs)t is the absorbance at time t, and c is a constant.

One important application of the variable-time integral method is the quantita- tive analysis of catalysts, which is based on the catalyst’s ability to increase the rate of a reaction. As the initial concentration of catalyst is increased, the time needed to reach the desired extent of reaction decreases. For many catalytic systems the rela tionship between the elapsed time, ∆t, and the initial concentration of analyte is

where Fcat and Funcat are constants that are functions of the rate constants for the catalyzed and uncatalyzed reactions, and the extent of the reaction during the time span ∆t. 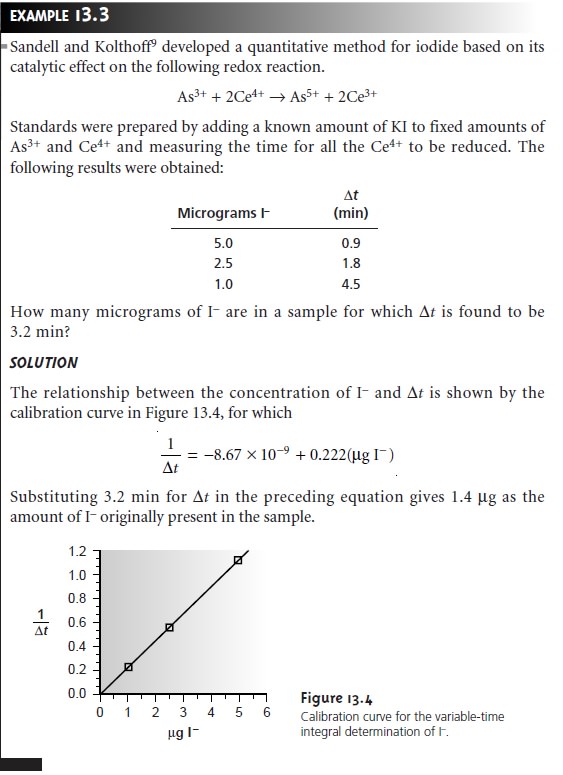 Rate methods for analyzing kinetic data are based on the differential form of the rate law. The rate of a reaction at time t, (rate)t, is determined from the slope of a curve showing the change in concentration for a reactant or product as a function of time (Figure 13.5). 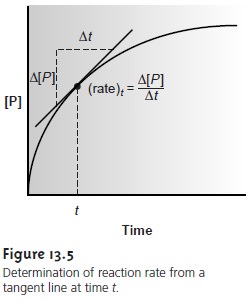 For a reaction that is first- order, or pseudo-first-order in analyte, the rate at time t is given as

Substituting an equation similar to 13.13 into the preceding equation gives the fol- lowing relationship between the rate at time t and the analyte’s initial concentration.

If the rate is measured at a fixed time, then both k and e–kt are constant, and a cali- bration curve of (rate)t versus [A]0 can be used for the quantitative analysis of the analyte.

The use of the initial rate (t = 0) has the advantage that the rate is at its maxi- mum, providing an improvement in sensitivity. Furthermore, the initial rate is measured under pseudo-zero-order conditions, in which the change in concentra- tion with time is effectively linear, making the determination of slope easier. Finally, when using the initial rate, complications due to competing reactions are avoided. One disadvantage of the initial rate method is that there may be insufficient time for a complete mixing of the reactants. This problem is avoided by using a rate mea- sured at an intermediate time (t > 0). 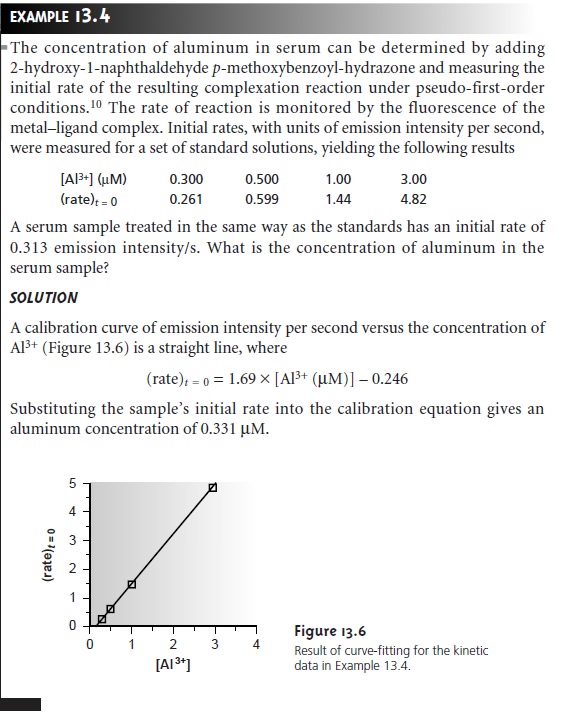 In the direct-computation methods discussed earlier, the analyte’s concentration is determined by solving the appropriate rate equa- tion at one or two discrete times. The relationship between the analyte’s concen- tration and the measured response is a function of the rate constant, which must be measured in a separate experiment. This may be accomplished using a single external standard (as in Example 13.2) or with a calibration curve (as in Example 13.4).

In a curve-fitting method the concentration of a reactant or product is moni- tored continuously as a function of time, and a regression analysis is used to fit an appropriate differential or integral rate equation to the data. For example, the initial concentration of analyte for a pseudo-first-order reaction, in which the concentra- tion of a product is followed as a function of time, can be determined by fitting a re- arranged form of equation 13.12 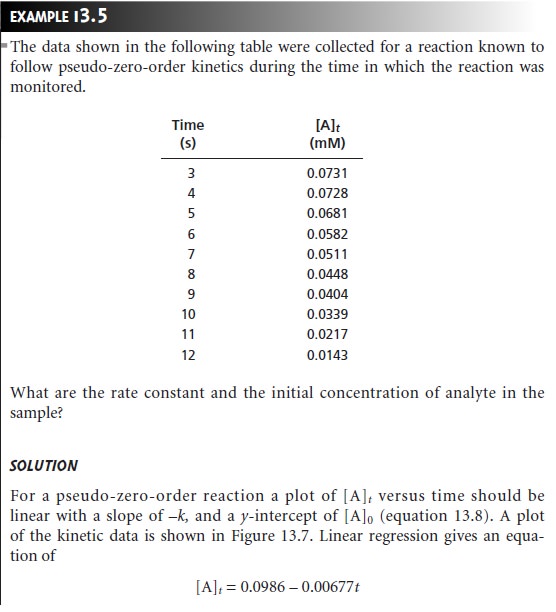 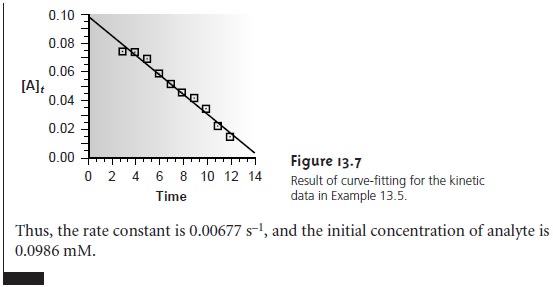 At the beginning of this section we noted that kinetic methods are susceptible to significant errors when experimental variables affecting the reaction’s rate are difficult to control. Many variables, such as temperature, can be controlled with proper instrumentation. Other variables, such as interferents in the sample matrix, are more difficult to control and may lead to significant errors. Although not discussed in this text, direct-computation and curve-fitting methods have been developed that compensate for these sources of error.

Although each chemical kinetic method has its own unique considerations, the determination of creatinine in urine based on the ki- netics of its reaction with picrate provides an instructive example of a typical procedure.