Mesic conditions are suitable for broad-leaved plants with fairly soft, thin or somewhat sclerified coriaceous (tough) leaves. In temperate or tropical submontane zones, many mesophytes pass the winter months in a leafless form, either as deciduous trees or perennial herbs, and their buds have bud scales. The fringes of the mesic zones tend to have a higher proportion of evergreens with coriaceous leaves. There is a gradation from mesic to xeric conditions in many areas, and plants showing adaptations to both situations may grow side by side. Mesophytes tend to have anatomical variations that are related more to the family to which they belong than to the environ-ment in which they grow. In many ways the anatomy of mesic plants is con-sidered the norm from which xerophytes and hydrophytes depart. As a result the latter are usually compared to the former. 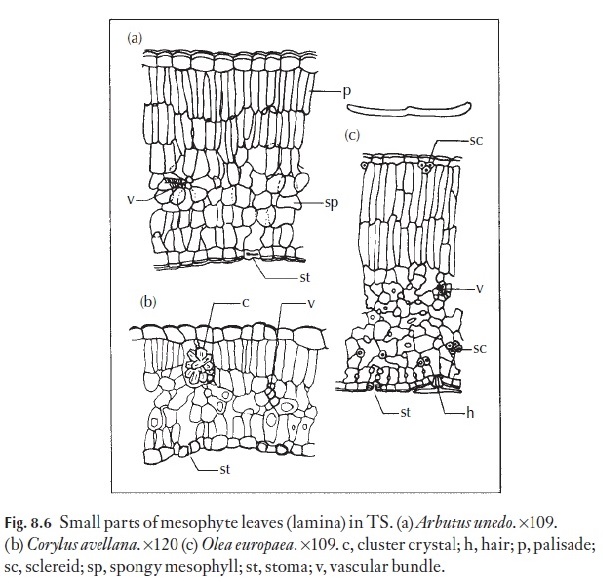 Consequently, it is difficult to generalize about the anatomy of meso-phytes. The epidermal cells frequently have only moderately thickened outer walls and a thin or slightly thickened cuticle. The stomata, normally confined to the lower surface, are usually superficial. The mesophyll nor-mally consists of one, two or more layers of closely packed palisade-like cells. Cells of the inner layers may be the least densely packed, and border the loosely arranged spongy mesophyll. Sclerenchymatous tissue is absent or sparse, and may be represented by a small number of sclereids. Scleren-chymatous sheaths to vascular bundles are rare, except in relation to larger primary veins, midrib or petiole. See Fig. 8.6 for examples of mesophyte leaves.

Tropical rain forests are adequately supplied with water. The dominant life form is the very tall tree. Leaves are often long-lived, because there are few seasonal stresses which might necessitate the adoption of a regular de-ciduous habit. Some rain forest trees continuously lose and replace leaves. Others may be deciduous every few years; these often flower before the new leaf growth (e.g. the Bignoniaceae). The leaves are often relatively tough(coriaceous) but have large surface areas. Many have an extended ‘drip tip’. Bud scales are rarely developed.

The relative humidity inside the canopy of the rain forest is normally ap-proaching 100%. Many epiphytes grow in the relative shade. Some, for ex-ample certain Bromeliaceae, may have a construction by which leaves funnel water to the centre of the plant where it is held in ‘tanks’ formed by leaf bases. The normal roots of these and other epiphytes are simply an-chors, and do not extract nourishment from the plants upon which they grow. Many of the epiphytic Araceae and Orchidaceae have special aerial roots with modified enlarged epidermal and cortical tissues (velamen) which can absorb and retain atmospheric moisture (see Fig. 4.1). In the shelter of the large trees, understories of shorter trees flourish, often with frond-like leaves of great length. 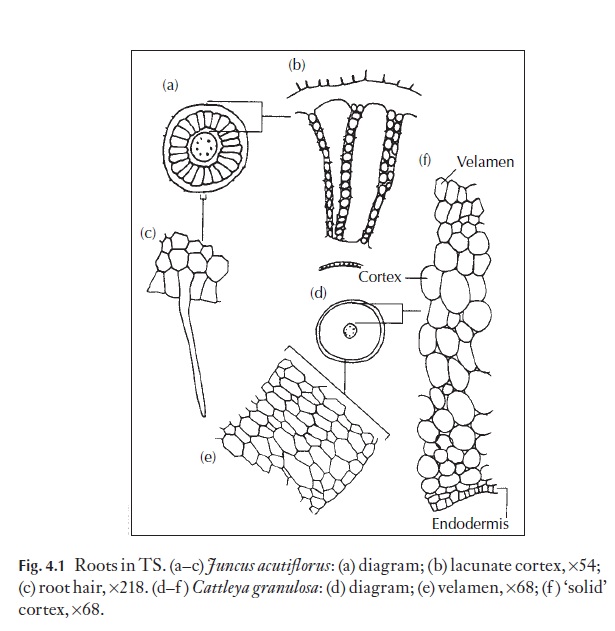 Plants living on forest floors, in dense shade, have to survive in condi-tions almost diametrically opposite to those to which xerophytes are sub-jected. They have to be extremely efficient in light collection. The relatively humid, windless environment enables species with large, thin, relatively unprotected leaves to thrive. They are often very chlorophyll-rich, and appear dark green. A number of the epiphytic Gesneriaceae in the Old World tropics have a particularly interesting and as yet unexplained adapta-tion. The upper epidermis of the leaves is multilayered, and consists of col-ourless cells. In some species it may make up to two-thirds of the total thickness of the leaf. The chlorenchyma is relatively thin, with a conspicu-ous layer of widely spaced palisade-like cells and some spongy mesophyll (Fig. 8.7).

Shafts of sunlight may penetrate the leaf canopy above; their angle changes during the day. Light reaching a leaf surface at 90 degrees is less likely to be reflected than oblique light. Many of the species adapted to this environment have means of presenting to light a high proportion of their surface at 90 degrees. Some lower plants, such as Selaginella species, achieve this by having highly domed epidermal cells, containing chloro-plasts. As the sun tracks, each cell can present part of its surface normal to the source. Other species, for example from among the begonias, have a surface in which the epidermal cells develop together to produce a series of multicellular domes with much the same effect. Undulating leaf surfaces are also common. 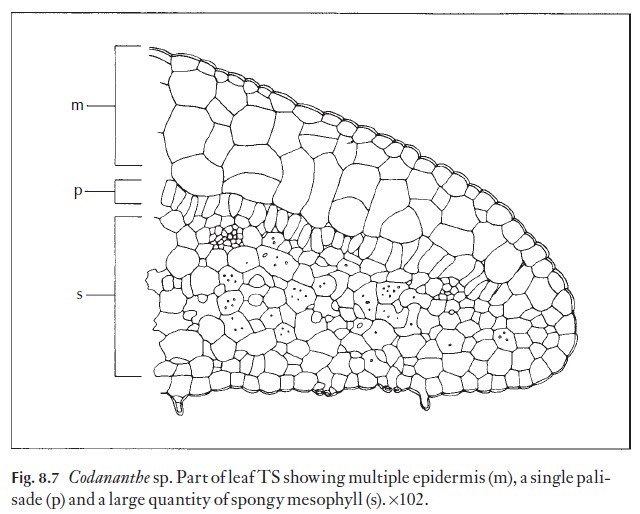 In general the leaves themselves are thin. This enables the chloroplasts to be presented in one to three cell layers into which the light can penetrate. Each layer effectively shades the next one in. Most interestingly, when viewed from the underside, many of these leaves adapted to low light inter-ception appear purple. This is because they have an inbuilt sheet of anthocyanin-containing cells which act as reflectors. The anthocyanin may be in the lower epidermis, but more commonly it is in an inner layer, immediately below the chlorenchyma. The chlorenchyma above this layer is usually itself only one or two layered. This allows what little light there is to penetrate the chlorenchyma fully. This means that light striking the upper surface of the leaf, which would otherwise pass through the leaf, is re-flected back for a return visit to the chlorenchyma. This parallels the heat/ light reflecting membranes applied to windows in buildings, but makes effi-cient use of the reflected energy. Examples include members of the Com-melinaceae, Marantaceae and Gesneriaceae.

Many of the epiphytic Bromeliaceae have numerous hairs and scales on their leaves, thought to be capable of absorbing water from the very humid atmosphere in which the plants grow.

Apart from the root modifications and the somewhat coriaceous leaves of the upper storey trees, rain forest angiosperms appear to have more ana-tomical characters relating to the families to which they belong than to the environment in which they grow.