Nevocellular nevus (mole) is a benign tumor of melanocytes (melanocytic nevuscells) that is clearly related to sun exposure. Types of nevi include junctional, compound, and intradermal. Nevi have uniform tan to brown color with sharp, well-circumscribed borders and tend to be stable in shape and size. Malignant trans-formation is uncommon.

Malignant melanoma is a malignancy of melanocytes whose incidence is increasingat a rapid rate, with peak in ages 40–70. Risk factors include chronic sun exposure, sunburn, fair skin, dysplastic nevus syndrome, and familial melanoma (associated with loss of function mutation of the p16 tumor suppressor gene, CDKN2A, on chromosome 9; somatic mutations of NRAS and BRAF also occur). Melanomas characteristically form skin lesions of large diameter with asymmetric and irregular borders and variegated color; the lesions may be macules, papules, or nodules. Mela-nomas on males have increased frequency on the upper back; females have increased frequency on the back and legs.

·            Lentigo maligna melanoma is usually located on the face or neck of older indi-viduals and has the best prognosis.

·            Superficial spreading melanoma is the most common type of melanoma and has a primarily horizontal growth pattern.

·            Acral lentiginous melanoma is the most common melanoma in dark-skinned individuals; it affects palms, soles, and subungual area.

·              Nodular melanoma is a nodular tumor with a vertical growth pattern that has the worst prognosis of the melanomas. 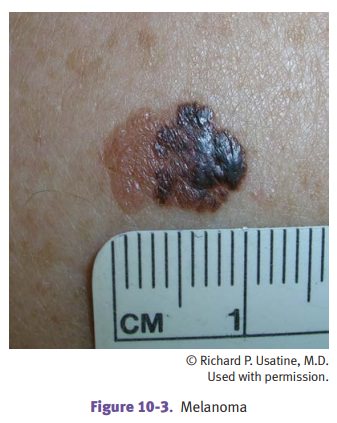 The prognosis of melanomas is determined by TNM staging; T status is based on the depth of invasion (Breslow thickness measured histologically in millimeters).