Acanthosis nigricans causes thickened, hyperpigmented skin of the posterior neck,axillae, and groin; it is often associated with obesity and hyperinsulinism.

Acanthosis nigricans causes thickened, hyperpigmented skin of the posterior neck,axillae, and groin; it is often associated with obesity and hyperinsulinism. On rare occasions it is associated with internal malignancy (stomach and other gastrointes-tinal malignancies).

Seborrheic keratoses are benign squamoproliferative neoplasms that are very com-mon in middle-aged and elderly individuals; they may occur on the trunk, head, neck, and the extremities. The lesions are tan to brown coin-shaped plaques that have a granular surface with a “stuck on” appearance, characterized microscopi-cally by basaloid epidermal hyperplasia and “horn cysts” (keratin-filled epidermal pseudocysts). They are usually left untreated, but may be removed if they become irritated or for cosmetic purposes. The sign of Leser-Trélat (paraneoplastic syn-drome) is the sudden development of multiple lesions which may accompany an internal malignancy.

Psoriasis is an autoimmune disorder with a clear genetic component that causesincreased proliferation and turnover of epidermal keratinocytes; it affects 1% of the U.S. population. The most common form is psoriasis vulgaris. Common sites of involvement include the knees, elbows, and scalp; the classic skin lesion is a well-demarcated erythematous plaque with a silvery scale. Removal of scale results in pinpoint bleeding (Auspitz sign). Nail beds show pitting and discoloration. Psoriasis may be associated with arthritis, enteropathy, and myopathy. 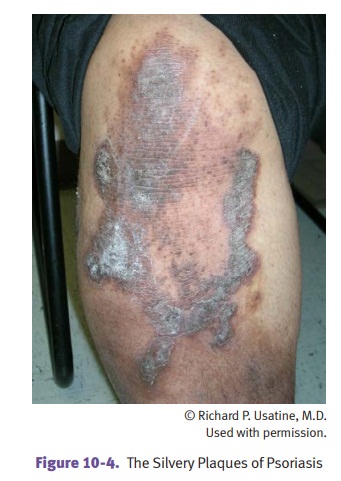 Microscopically, the lesions show epidermal hyperplasia (acanthosis), patchyhyperkeratinization with parakeratosis, uniform elongation and thickening of the rete ridges, thinning of the epidermis over the dermal papillae, and Munro microabscesses.

Treatment is topical steroids and ultraviolet irradiation; severe systemic dis-ease may be treated with methotrexate.

Pemphigus is a rare, potentially fatal autoimmune disorder that is characterized byintraepidermal blister formation. Pemphigus vulgaris is the most common form. The pathogenesis involves the production of autoantibodies directed against a part of the keratinocyte desmosome called desmoglein 3, with resulting loss of intercellu-lar adhesion (acantholysis) and blister formation. Pemphigus causes mucosal lesions and easily ruptured, flaccid blisters. Oral involvement is common.

·            Microscopic examination shows intraepidermal acantholysis; the acantholy-sis leaves behind a basal layer of keratinocytes, which has a tombstone-like arrangement. Immunofluorescence shows a net-like pattern of IgG staining between the epidermal keratinocytes that create bullae.

Bullous pemphigoid is a relatively common autoimmune disorder of older individu-als characterized by subepidermal blister formation with tense bullae that do not rupture easily. The condition results from production of autoantibodies directed against a part of the keratinocyte hemidesmosome called bullous pemphigoid­antigens 1 and 2. Immunofluorescence shows linear deposits of IgG at the dermal-epidermal junction.

Porphyria cutanea tarda is an acquired and familial disorder of heme synthesis.Patients experience upper extremity blistering secondary to sun exposure and minor trauma. Microscopically, there are subepidermal blisters with minimal inflamma-tion. Dermal vessels are thickened. Direct immunofluorescence shows deposition of immunoglobulins and complement at the epidermal basement membrane and around dermal vessels. 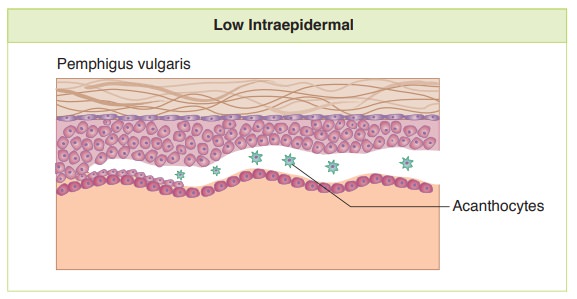 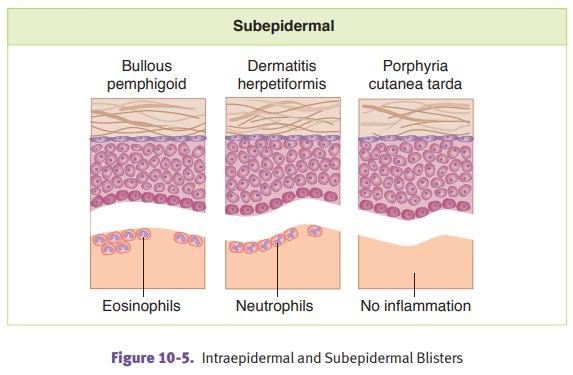 Ichthyosis vulgaris is a common inherited (autosomal dominant) skin disordercharacterized by a thickened stratum corneum with absent stratum granulosum. Onset is in childhood. Patients have hyperkeratotic, dry skin on the trunk and extensor surfaces of limb areas.

Xerosis is a common cause of pruritus and dry skin in the elderly that is due todecreased skin lipids. Cancer patients receiving epidermal growth factor receptor inhibitor are susceptible. Treatment is with emollients.

·              Atopic dermatitis is often inherited. Defects in the keratinocyte barrier are due to mutations in the filaggrin gene (FLG).

·              Contact dermatitis can be either allergic type (poison ivy, nickel in jewelry) or photodermatitis type (such as photosensitivity reaction after tetracycline).

Polymorphous light eruption is the most common idiopathic form of photoder-matosis and causes pruritic erythematous macules, papules, plaques, or vesicles on exposure to sunlight. There is dermal edema and inflammation.

Verrucae (warts) are caused by human papillomavirus. Verruca vulgaris is the mostcommon type.

Cutaneous lupus erythematosus may be acute (facial butterfly rash), subacute (pho-tosensitive rash on anterior chest, upper back and upper extremities), or chronic (dis-coid plaques, usually above the neck). Direct immunofluorescence shows deposition of immunoglobulin and complement at the dermal-epidermal junction. Serologies for autoantibodies and clinical correlation help establish the diagnosis.

Erythema multiforme is a hypersensitivity skin reaction to infections (Mycoplasmapneumoniae, herpes simplex) or drugs (sulfonamides, penicillin, barbiturates, phe-nytoin) characterized by vesicles, bullae, and “targetoid” erythematous lesions. The most severe form is Stevens-Johnson syndrome, which has extensive involvement of skin and mucous membranes.

Pityriasis rosea causes a pruritic rash that starts with an oval-shaped “herald patch”and progresses to a papular eruption of the trunk to produce a “Christmas tree” distribution. It is clinically diagnosed, self-limiting and possibly a viral exanthem.

Granuloma annulare is a chronic inflammatory disorder that causes papules andplaques. Palisaded granulomas are present microscopically. The pathogenesis is immunologic, but most cases occur in healthy patients.

Erythema nodosum causes raised, erythematous, painful nodules of subcutaneousadipose tissue, typically on the anterior shins, which can be associated with granu-lomatous diseases and streptococcal infection.