If flow over a boundary occurs when there is a pressure decrease in the direction of flow, the fluid will accelerate and the boundary layer will become thinner.

This is the case for convergent flows.

The accelerating fluid maintains the fluid close to the wall in motion. Hence the flow remains stable and turbulence reduces. Boundary layer separation does not occur. 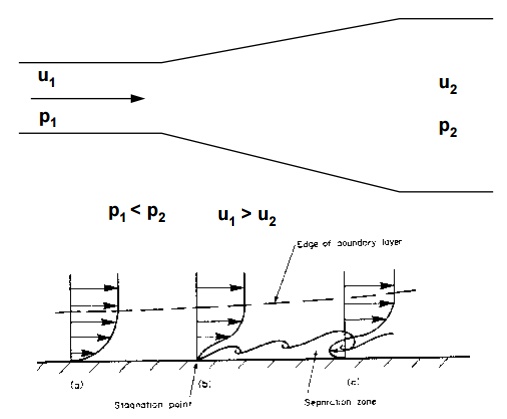 This phenomenon is known as  boundary layer separation.

At the edge of the separated boundary layer, where the velocities change direction, a line of vortices occur (known as a vortex sheet). This happens because fluid to either side is moving in the opposite direction.

This boundary layer separation and increase in the turbulence because of the vortices results in very large energy losses in the flow.

These separating / divergent flows are inherently unstable and far more energy is lost than in parallel or convergent flow.

(iii) A divergent duct or diffuser

The increasing area of flow causes a velocity drop (according to continuity) and hence a pressure rise(according to the Bernoulli equation).

Assuming equal sized pipes, as fluid is removed, the velocities at 2 and 3 are smaller than at 1, the entrance to the tee. Thus the pressure at 2 and 3 are higher than at 1. These two adverse pressure gradients can cause the two separations shown in the diagram above.

Tee junctions are special cases of the Y-junction with similar separation zones occurring. See the diagram below. 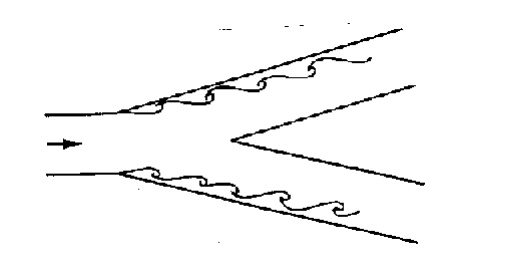