Using inflated or turgid, thin-walled cells (parenchyma): these arepresent in growing points, and the cortex and parenchymatous pith of many plants.

1 Using inflated or turgid, thin-walled cells (parenchyma): these arepresent in growing points, and the cortex and parenchymatous pith of many plants. They constitute the bulk of many succulent plants, for example, Aloe, Gasteria leaves, Salicornia from salt marshes and Lithops from desert regions. The cell wall acts as a slightly elastic container; internal liquid pressure inflates the cell so that it becomes supporting, like the air in an inflated car tyre. Its support properties depend on water pressure, so a water shortage can lead to a loss of support and wilting. Some fairly large organs can be supported by this system, but they usually rely on the additional help of devices that reduce water loss, such as a thick cuticle, and perhaps also thick outer walls to the epidermal cells, and spe-cially modified stomata. A strong epidermis is particularly important, be-cause it acts as the outermost boundary between the plant cells and the air. A split in the skin of a tomato, for example, rapidly leads to deformation of the fruit, or a cut in the succulent leaf of a Crassula or Senecio rapidly opens up. Not many plants rely on the turgid cell and strong epidermis principle alone.

2 Both monocotyledons and dicotyledons and have specially developed,elongated, thick-walled fibres, in suitable places, which assist in mechanical support. Alternatively, they have especially thick-walled, generally elon-gated parenchyma cells (also sometimes called prosenchyma); or, in those primary parts of the stem where growth in length is continuing, collen-chyma cells may be present. Although there are only a few common ways in which specialized mechanical supporting cells are arranged in the stem, leaf or root, it is the variations on these themes which are of particular inter-est to those who have to identify small fragments of plants, or make com-parative, taxonomic studies. The variations will be dealt with in detail in the dealing with each organ. Obviously, to be effective the me-chanical system must be economical in materials, and the cells must not be arranged in such a way as to hinder or impede the essential physiological functions of the organs.

The mechanical systems develop with the early growth of the seedling. Whilst turgid cells are the only means of support at first, collenchyma may rapidly become established, particularly in dicotyledonous plants. This tis-sue is concentrated in the outer part of the cortex, and is frequently associ-ated with the midrib of the leaf blade, and the petiole.

Collenchyma is essentially the strengthening tissue of primary organs, or those undergoing their phase of growth in length. The cells making up this tissue have thickened cellulosic walls at their angles, are rich in pectin and are often found with chloroplasts in their living protoplasts.

Sometimes the only other mechanical support is provided by the wood (xylem) composed of tracheids (imperforate tracheary elements, i.e. cells with intact pit membrane q.v., between them and adjacent elements of the vascular system), as in most gymnosperms, or by the tracheids, vessels (tube-like series of vessel elements or members with perforate common end walls; vessel elements are the individual cell components of a vessel, with perforated end walls) and xylem fibres of the angiosperms. However, far more commonly there are also fibres outside the xylem (extraxylary fibres) which are arranged in strands or as a complete cylinder, such as in Pelargo-nium which can give considerable strength to herbaceous plants, and par-ticularly in herbaceous monocotyledons in their stems and leaves. The much elongated fibres, with their cellulose and lignin walls, are not so flexi-ble and do not stretch as readily as does collenchyma; consequently they are often found most fully developed in those parts of organs that have ceased growth in length.

Figure 1.1 shows some fibre arrangements in monocotyledon stems and leaves. In the leaf, fibres commonly strengthen the margins (e.g. Agave) and are found as girders or caps associated with the vascular bundles. In the stem, strands next to the epidermis can act rather like the iron or steel rein-forcing rods in reinforced concrete. Together with a ribbed outline that they often confer on the stem section, they produce a rigid yet flexible sys-tem with economy of use of strengthening material.

Tubes are known to resist bending more effectively than solid rods of similar diameter; they also use much less material than the solid rod. It is not surprising then, that tubes or cylinders of fibres commonly occur in plant stems. They may be next to the surface, further into the cortex, or may occur as a few layers of cells uniting an outer ring of vascular bundles (Fig. 1.1). 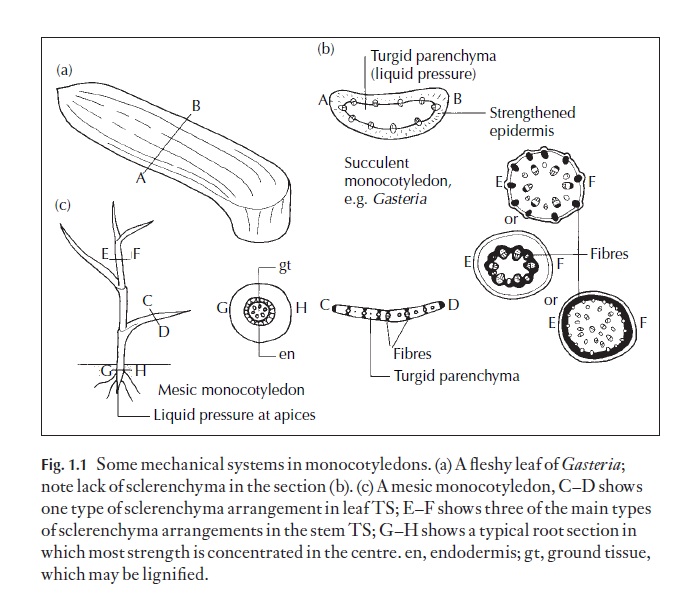 The various arrangements within leaves, stems and roots will be discussed in more detail. Mention must be made here that in some monocotyledon stems individual vascular bundles scattered through-out the stem can each be enclosed in a strong cylinder of fibres, which form a bundle sheath. Each bundle plus its sheath then acts as a reinforcing rod set in a matrix of parenchymatous cells and with a sieve cell centre so the whole unit acts as a hollow cylinder with maximum efficiency of both trans-port and strength.

Fibres or sclereids in dicotyledon leaves are also often related to the ar-rangement of the veins in the lamina and to the petiole vascular traces. These are shown in Fig. 1.2. The concentration of strength in an approxi-mately centrally placed cylinder or strand in the petiole permits considera-ble torsion or twisting to take place as the leaf blade is moved by the wind, without damage occurring to the delicate conducting tissues. Primary dicotyledonous stems may have fibres in the cortex and phloem. The sub-terranean roots of both monocotyledons and dicotyledons have to resistdifferent forces and stresses from those imposed on the aerial stems – ten-sions or pulling forces, as opposed to bending forces. The concentration of strengthening cells near the root centre gives it rope-like properties. 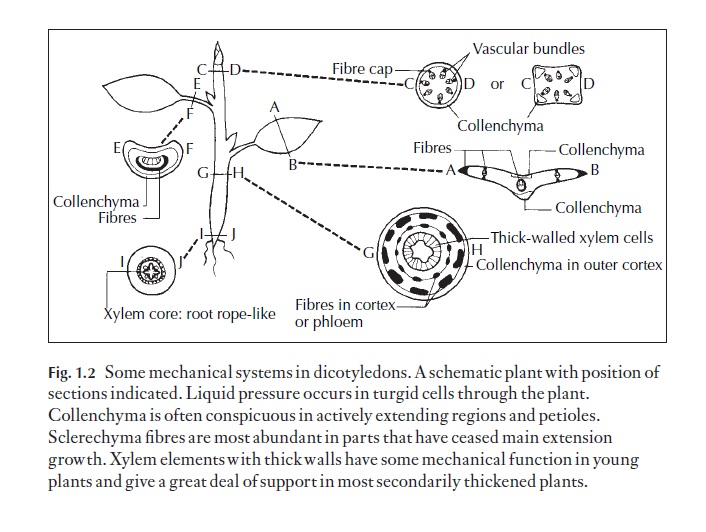