Measurement of Bilirubin in the Bile as a Clinical Diagnostic Tool

The formation of bile by the liver and the function of the bile salts in the digestive and absorptive processes of the intestinal.

Measurement of Bilirubin in the Bile as a Clinical Diagnostic Tool

The formation of bile by the liver and the function of the bile salts in the digestive and absorptive processes of the intestinal. In addition, many substances are excreted in the bile and then eliminated in the feces. One of these is the greenish yellow pigmentbilirubin. This is a major end product of hemoglobin degradation. However, it also provides an exceedinglyvaluable tool for diagnosing both hemolytic blood diseases and various types of liver diseases. Therefore,while referring to Figure 70–2, let us explain this. 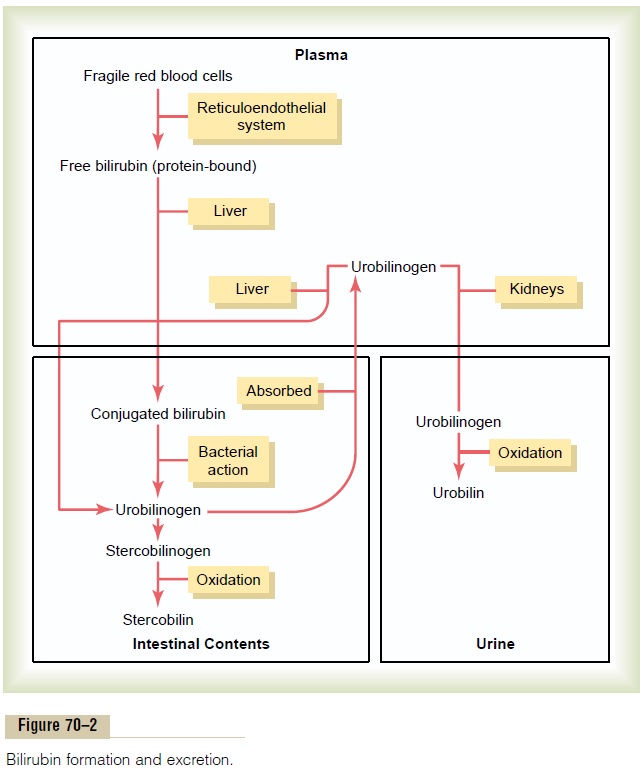 Briefly, when the red blood cells have lived out their life span (on average, 120 days) and have become too fragile to exist in the circulatory system, their cell membranes rupture, and the released hemoglobin is phagocytized by tissue macrophages (also called the reticuloendothelial system) throughout the body. The hemoglobin is first split into globin and heme, and the heme ring is opened to give (1) free iron, which is transported in the blood by transferrin, and (2) a straight chain of four pyrrole nuclei, which is the sub-strate from which bilirubin will eventually be formed. The first substance formed is biliverdin, but this is rapidly reduced to free bilirubin, which is gradually released from the macrophages into the plasma. The free bilirubin immediately combines strongly with plasma albumin and is transported in this combination throughout the blood and interstitial fluids. Even when bound with plasma protein, this bilirubin is still called “free bilirubin” to distinguish it from “conjugated biliru-bin,” which is discussed later.

Formation and Fate of Urobilinogen. Once in the intestine,about half of the “conjugated” bilirubin is converted by bacterial action into the substance urobilinogen, which is highly soluble. Some of the urobilinogen is reab-sorbed through the intestinal mucosa back into the blood. Most of this is re-excreted by the liver back into the gut, but about 5 per cent is excreted by the kidneys into the urine.After exposure to air in the urine, the uro-bilinogen becomes oxidized to urobilin; alternatively, in the feces, it becomes altered and oxidized to form ster-cobilin. These interrelations of bilirubin and the otherbilirubin products are shown in Figure 70–2.