The Liver Has High Blood Flow and Low Vascular Resistance.

About 1050 milliliters of blood flows from the portal vein into the liver sinusoids each minute, and an addi-tional 300 milliliters flows into the sinusoids from the hepatic artery, the total averaging about 1350 ml/min. This amounts to 27 per cent of the resting cardiac output.

The pressure in the portal vein leading into the liver averages about 9 mm Hg, and the pressure in the hepatic vein leading from the liver into the vena cava normally averages almost exactly 0 mm Hg. This small pressure difference, only 9 mm Hg, shows that the resist-ance to blood flow through the hepatic sinusoids is nor-mally very low, especially when one considers that about 1350 milliliters of blood flows by this route each minute.

Cirrhosis of the Liver Greatly Increases Resistance to Blood Flow.

When liver parenchymal cells are destroyed, they are replaced with fibrous tissue that eventually contracts around the blood vessels, thereby greatly impeding the flow of portal blood through the liver. This disease process is known as cirrhosis of the liver. It results most commonly from alcoholism, but it can also follow inges-tion of poisons such as carbon tetrachloride, viral dis-eases such as infectious hepatitis, obstruction of the bile ducts, and infectious processes in the bile ducts.

The portal system is also occasionally blocked by a large clot that develops in the portal vein or its major branches. When the portal system is suddenly blocked, the return of blood from the intestines and spleen through the liver portal blood flow system to the sys-temic circulation is tremendously impeded, resulting in portal hypertension and increasing the capillary pres-sure in the intestinal wall to 15 to 20 mm Hg above normal. The patient often dies within a few hours because of excessive loss of fluid from the capillaries into the lumens and walls of the intestines.

The Liver Functions as a Blood Reservoir

Because the liver is an expandable organ, large quanti-ties of blood can be stored in its blood vessels. Its normal blood volume, including both that in the hepatic veins and that in the hepatic sinuses, is about 450 milli-liters, or almost 10 per cent of the body’s total blood volume. When high pressure in the right atrium causes backpressure in the liver, the liver expands, and 0.5 to 1 liter of extra blood is occasionally stored in the hepatic veins and sinuses. This occurs especially in cardiac failure with peripheral congestion. Thus, in effect, the liver is a large, expand-able, venous organ capable of acting as a valuable blood reservoir in times of excess blood volume and capable of supplying extra blood in times of diminished blood volume.

Because the pores in the hepatic sinusoids are very permeable and allow ready passage of both fluid and proteins into the spaces of Disse, the lymph draining from the liver usually has a protein concentration of about 6 g/dl, which is only slightly less than the protein concentration of plasma. Also, the extreme permeabil-ity of the liver sinusoid epithelium allows large quanti-ties of lymph to form. Therefore, about half of all the lymph formed in the body under resting conditions arises in the liver.

High Hepatic Vascular Pressures Can Cause Fluid Transudation into the Abdominal Cavity from the Liver and Portal Capillaries— Ascites. When the pressure in the hepatic veins risesonly 3 to 7 mm Hg above normal, excessive amounts of fluid begin to transude into the lymph and leak through the outer surface of the liver capsule directly into the abdominal cavity. This fluid is almost pure plasma, con-taining 80 to 90 per cent as much protein as normal plasma. At vena caval pressures of 10 to 15 mm Hg, hepatic lymph flow increases to as much as 20 times normal, and the “sweating” from the surface of the liver can be so great that it causes large amounts of free fluid in the abdominal cavity, which is called ascites. Block-age of portal flow through the liver also causes high capillary pressures in the entire portal vascular system of the gastrointestinal tract, resulting in edema of the gut wall and transudation of fluid through the serosa of the gut into the abdominal cavity. This, too, can cause ascites.

The liver possesses a remarkable ability to restore itself after significant hepatic tissue loss from either partial hepatectomy or acute liver injury, as long as the injury is uncomplicated by viral infection or inflammation. Partial hepatectomy, in which up to 70 per cent of the liver is removed, causes the remaining lobes to enlarge and restore the liver to its original size. This regenera-tion is remarkably rapid and requires only 5 to 7 days in rats. During liver regeneration, hepatocytes are esti-mated to replicate once or twice, and after the original size and volume of the liver are achieved, the hepato-cytes revert to their usual quiescent state.

Control of this rapid regeneration of the liver is still poorly understood, but hepatocyte growth factor (HGF) appears to be an important factor causing liver cell divi-sion and growth. HGF is produced by mesenchymal cells in the liver and in other tissues, but not by hepa-tocytes. Blood levels of HGF rise more than 20-fold after partial hepatectomy, but mitogenic responses are usually found only in the liver after these operations, suggesting that HGF may be activated only in the affected organ. Other growth factors, especially epider-mal growth factor, and cytokines such as tumor necro-sis factor and interleukin-6 may also be involved in stimulating regeneration of liver cells.

After the liver has returned to its original size, the process of hepatic cell division is terminated. Again, the factors involved are not well understood, although transforming growth factor-b,a cytokine secreted byhepatic cells, is a potent inhibitor of liver cell prolifera-tion and has been suggested as the main terminator of liver regeneration.

Physiologic experiments indicate that liver growth is closely regulated by some unknown signal related to body size, so that an optimal liver-to-body weight ratio is maintained for optimal metabolic function. In liver diseases associated with fibrosis, inflammation, or viral infections, however, the regenerative process of the liver is severely impaired, and liver function deteriorates.

Blood flowing through the intestinal capillaries picks up many bacteria from the intestines. Indeed, a sample of blood taken from the portal veins before it enters the liver almost always grows colon bacilli when cultured, whereas growth of colon bacilli from blood in the sys-temic circulation is extremely rare.

Special high-speed motion pictures of the action of Kupffer cells, the large phagocytic macrophages that line the hepatic venous sinuses, have demonstrated that these cells efficiently cleanse blood as it passes through the sinuses; when a bacterium comes into momentary contact with a Kupffer cell, in less than 0.01 second the bacterium passes inward through the wall of the Kupffer cell to become permanently lodged therein until it is digested. Probably less than 1 per cent of the bacteria entering the portal blood from the intestines succeeds in passing through the liver into the systemic circulation. 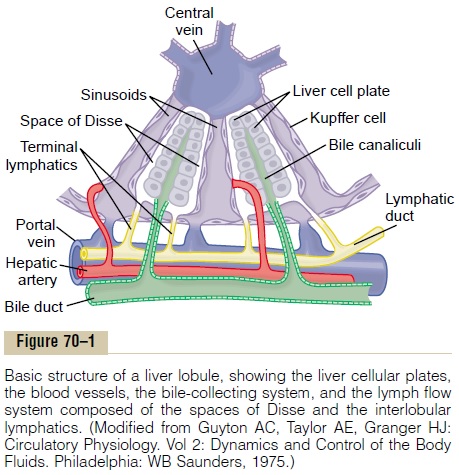