Meaning and Definition of Meeting

the formal and informal planned assembly of individuals called to discuss certain issues and problems and to take decisions.

Business entity is generally considered as artificial person which cannot work on its own. It must act through some human intermediary. In the absence of any human agency, no business could perform. Business is run by board of directors who are the elected representatives of all the other members. These board members meet at regular intervals to discuss policy matters and formulate strategies for implementation of such policies. All the other members meets together once in every year to discuss about the functioning of business. Especially in case of big organizations where all major decisions are taken in consensus with other members of the concern. In these connection meetings plays vital role.

Meetings are generally arranged by secretary. At times, office manager also acts as a secretary; it is his duty to make arrangement for meetings whenever required and also to submit the reports related to it to top management. Hence, this chapter trough’s light on various concepts relating to meeting and report writing.

A meeting is an interaction between people, held for the purpose of achieving a common goal through verbal communication, such as sharing information or reaching agreement about a new idea, a new opportunity, a problem, or to brainstorm something with an aim to take right decision.

It may occur face-to-face or virtually, as facilitated by communication technology such as a telephone, conference calls, a Skype conference call or a videoconference. Business organizations often hold meetings with an intention to increase efficiency and productivity.

One Merriam -Webster dictionary defines a meeting as “an act or process of coming together” - example an assembly for a common purpose.

According to Business Dictionary meeting is defined as “the formal and informal planned assembly of individuals called to discuss certain issues and problems and to take decisions.” Formal meetings are held at definite time, at a definite place, and usually for a definite duration to follow an agreed agenda on the other hand informal meetings are conducted among friends without such formalities 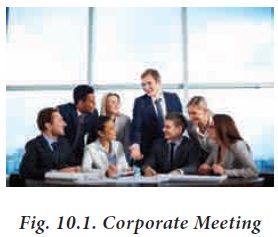 Hence meeting is a face to face discussion i.e. both directly and virtually among the people, conducted with an intention to take productive decisions to achieve the goals of an organization. But all gatherings are not meetings i.e., gatherings like, sports, games or concerts, a parties or the company of friends and demonstrations cannot be considered as meetings