The output from the laser beam is incident on the plane mirror. After refelection, it passes through a shutter to control its intensity. A focusing lens assembly is used to get affine beam.

To remove the molten material and to favour vaporization and also to provide cooling effect. It also protect the focusing optical arrangement against smoke and fumes and to increase the absorption of energy by the sample. During cutting of readily inflammable glass material like ceramics, wood and paper, nitrogen gas is used. This will increase the cutting rate by blowing the molten material out of the hole produced by laser energy further it reduces firing and fire accident. Oxygen gas is mainly used for brittle materials and metals

When the laser beam is incident on the surface of the specimen, there is simultaneous absorption and reflection. Particularly, metals are good reflectors of light. Thus most of the incident energy is wasted in the form of reflected energy. To reduce reflection, antireflection coating are made on the surface so as to increase the absorption energy. Absorptivity increases with increase of laser beam densities and the temperature. Absorptivity is directly proportional to the square root of resistivity of the specimen and it decreases with increase in wavelength.Rate of absorption is more in vapour phase than in liquid and solid phase . The absorbed energy creates lattice vibration and heating of materials.

Melting , vaporization and ejection of droplets of melt from the interative region. Thermal radiation and X-radiation upto 2 KeV.

Ultrasonic vibrations in metal due to the periodicity of heating and thermal expansion in the interaction of pulses whose substructure consists of spikes.

Part of the energy of incident radiation is reflected from the target surface itself without contributing to the work process.

High input to the welding spot by the focused beam of high power density. Low heat release in welding elements.

Possibility of welding dissimilar metals difficult to weld by other techniques.

STEPS TO BE FOLLOWED

Select the proper type of laser.

Estimate the optimal pattern of the beam and the beam parameters depending on the materials of joint elements, their thickness and limitations and heating temperature Design the experiment so as to make the most of laser welding practice.

The choice of the type of the laser depend on the total laser power required, power loss due to reflection from the surface of pieces to be welded, weld efficiency and other factors.

The two methods of melting are: 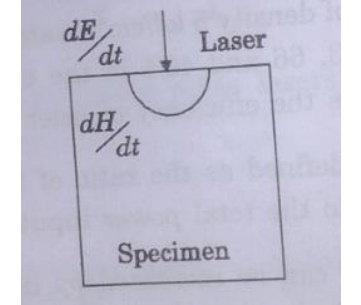 Here the metal absorbs the incident beam on the surface and heat is conducted through the metal to the sub-surface region. In this melting, the shape of the melted region in the form of hemispherical.

Low power lasers are used in this method. So depth of penetration is limited. The main application for this type of melting is for surface treatments and welding and cutting of thin specimens. The weld shape is hemispherical due to uniform thermal conduction in all direction.

In this mode of melting high power lasers are used. The incident laser beam melts the small cylindrical volume of metal through the thickness of material. A column of vapour is trapped inside this volume surrounded by molten metal. As the beam is moved, the vapour column moves along with that, melting the metal in front of the column through the depth. The molten metal flows along the base of the column and solidifies on the trailing end. The molten metal present in the walls of the cylindrical column of vapour is held firmly by the equilibrium between high vapour pressure of vapour and the surface tension of the molten metal.

The appearance of hole is in the form of key hole surrounded by molten metal then solidified metal. This provides greater path penetration due to high absorption of vapour column.

Laser trimming is the controlled alteration of the attributes of a capacitor or a resistor by a laser action. Selecting one or more components on the circuit and adjusting them with the laser .The trim changes the resistor or capacitor value until the nominal value has been reached. Usually laser is used to burn away small [portions of resistor, raising the resistance value. The burning operation can be conducted while the circuit is being tested by automatic test equipment, leading to extremely accurate final values for trimming of resistors. The resistance value of a film resistor is defined by its geometric dimensions as well as the resistor material. A lateral cut in the resistor material by the laser narrows the current flow path and increases the resistance value. The same effect is obtained whether the laser changes a thick film or a thin film resistor on a ceramic substrate.

If the trimming adjusts the whole circuit output is called active trim. During the trim process, the corresponding parameter is measured continuously and compared to the programmed nominal value. The laser stops automatically when the value reaches the nominal value.

The resistor to be trimmed is kept inside a [pressurized chamber below the surface of  the tempered pressure glass. The laser beam is made to fall on the resistor arrangement and the change of value continuously monitored. After perfect arrival of nominal value, the next resistor arrangement is put into the experimental set up

Better cleanliness when compared to conventional method of abrasive trimming. Better control of final resistance. Result in a higher yield the larger fraction of the resistor are obtained within the prescribed tolerance

Material processing refers to a variety of industrial operation in which the laser operation in which the laser operates on a work piece to modify it. Some of the possible applications include welding, hole drilling, cutting, trimming of electronic components, heating and alloying. Properties of laser light that enables material processing applications are its collimation, radiance and focus ability. Because of these properties, laser light can be concentrated by a lens to achieve extremely high irradiance at the surface of a work space. 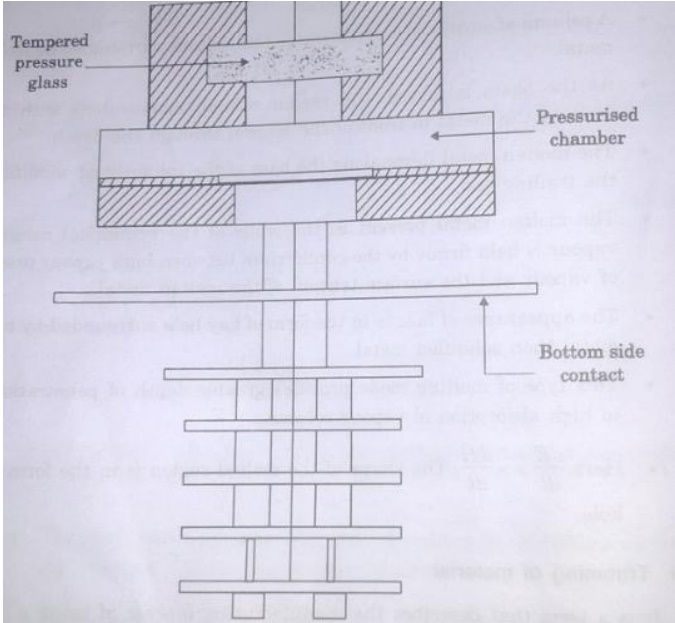 When laser radiation strikes a target surface, part of it is absorbed and part is reflected. The energy that is absorbed begins to heat the surface then penetrates into the target by thermal conduction. When the surface reaches the melting temperature, a liquid interface propagates into the material. With continued irradiation, the material begins to vaporize. If the irradiance is high enough , absorption in the blow off material leads to a hot opaque plasma. The plasma can grow back towards the laser as an LSA. (Laser supported Absorption) wave .