1. Basic Principle 2. Holography vs. photography 3. Principle Of Hologram Recording 5. Condition For Recording A Hologram 6. Reconstructing and viewing the holographic image

Holography is the science of producing holograms; it is an advanced form of photography that allows an image to be recorded in three dimensions

The Hungarian-British physicist Dennis Gabor was awarded the Nobel Prize in Physics in 1971 "for his invention and development of the holographic method". His work, done in the late 1940s, built on pioneering work in the field of X-ray microscopy by other scientists including MieczysławWolfke in 1920 and WL Bragg in 1939. The discovery was an unexpected result of research into improving electron microscopes at the British Thomson-Houston (BTH) Company in Rugby, England, and the company filed a patent in December 1947 (patent GB685286). The technique as originally invented is still used in electron microscopy, where it is known as electron holography, but optical holography did not really advance until the development of the laser in 1960. The word holography comes from the Greek words hólos; "whole" ,grapy; "writing" or "drawing").

Holography may be better understood via an examination of its differences from ordinary photography:

·                    A hologram represents a recording of information regarding the light that came from the original scene as scattered in a range of directions rather than from only one direction, as in a photograph. This allows the scene to be viewed from a range of different angles, as if it were still present.

·                    A photograph can be recorded using normal light sources (sunlight or electric lighting) whereas a laser is required to record a hologram.

·                    A lens is required in photography to record the image, whereas in holography, the light from the object is scattered directly onto the recording medium.

·                    A photograph can be viewed in a wide range of lighting conditions, whereas holograms can only be viewed with very specific forms of illumination.

·                    When a photograph is cut in half, each piece shows half of the scene. When a hologram is cut in half, the whole scene can still be seen in each piece. This is because, whereas each point in a photograph only represents light scattered from a single point in the scene, each point on a holographic recording includes information about light scattered from every point in the scene. It can be thought of as viewing a street outside a house through a 4 ft x 4 ft window, then through a 2 ft x 2 ft window. One can see all of the same things through the smaller window (by moving the head to change the viewing angle), but the viewer can see more at once through the 4 ft window.

·                    A photograph clearly maps out the light field of the original scene. The developed hologram's surface consists of a very fine, seemingly random pattern, which appears to bear no relationship to the scene it recorded. 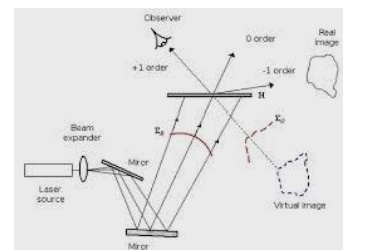 Holography is a technique that enables a light field, which is generally the product of a light source scattered off objects, to be recorded and later reconstructed when the original light field is no longer present, due to the absence of the original objects. Holography can be thought of as somewhat similar to sound recording, whereby a sound field created by vibrating matter like musical instruments or vocal cords, is encoded in such a way that it can be reproduced later, without the presence of the original vibrating matter.

Holograms are recorded using a flash of light that illuminates a scene and then imprints on a recording medium, much in the way a photograph is recorded. In addition, however, part of the light beam must be shone directly onto the recording medium - this second light beam is known as thereference beam. A hologram requires a laser as the sole light source. Lasers can be precisely controlled and have a fixed wavelength, unlike sunlight or light from conventional sources, which contain many different wavelengths. To prevent external light from interfering, holograms are usually taken in darkness, or in low level light of a different color from the laser light used in making the hologram. Holography requires a specific exposure time (just like photography), which can be controlled using a shutter, or by electronically timing the laser.

A more flexible arrangement for recording a hologram requires the laser beam to be aimed through a series of elements that change it in different ways. The first element is a beam splitter that divides the beam into two identical beams, each aimed in different directions:

o   One beam (known as the illumination or object beam) is spread using lenses and directed onto the scene using mirrors. Some of the light scattered (reflected) from the scene then falls onto the recording medium.

o   The second beam (known as the reference beam) is also spread through the use of lenses, but is directed so that it doesn't come in contact with the scene, and instead travels directly onto the recording medium.

Several different materials can be used as the recording medium. One of the most common is a film very similar to photographic film (silver halidephotographic emulsion), but with a much higher concentration of light-reactive grains, making it capable of the much higherresolution that holograms require. A layer of this recording medium (e.g. silver halide) is attached to a transparent substrate, which is commonly glass, but may also be plastic.

5. Condition For Recording A Hologram

The object should be fully exposed to radiation.

6. Reconstructing and viewing the holographic image

When the hologram plate is illuminated by a laser beam identical to the reference beam which was used to record the hologram, an exact reconstruction of the original object wavefront is obtained. An imaging system (an eye or a camera) located in the reconstructed beam 'sees' exactly the same scene as it would have done when viewing the original. When the lens is moved, the image changes in the same way as it would have done when the object was in place. If several objects were present when the hologram was recorded, the reconstructed objects move relative to one another, i.e. exhibit parallax, in the same way as the original objects would have done. It was very common in the early days of holography to use a chess board as the object and then take photographs at several different angles using the reconstructed light to show how the relative positions of the chess pieces appeared to change.

A holographic image can also be obtained using a different laser beam configuration to the original recording object beam, but the reconstructed image will not match the original exactly. When a laser is used to reconstruct the hologram, the image is speckled just as the original image will have been. This can be a major drawback in viewing a hologram.

White light consists of light of a wide range of wavelengths. Normally, if a hologram is illuminated by a white light source, each wavelength can be considered to generate its own holographic reconstruction, and these will vary in size, angle, and distance. These will be superimposed, and the summed image will wipe out any information about the original scene, as if superimposing a set of photographs of the same object of different sizes and orientations. However, a holographic image can be obtained using white light in specific circumstances, e.g. with volume holograms and rainbow holograms. The white light source used to view these holograms should always approximate to a point source, i.e. a spot light or the sun. An extended source (e.g. a fluorescent lamp) will not reconstruct a hologram since its light is incident at each point at a wide range of angles, giving multiple reconstructions which will "wipe" one another out.