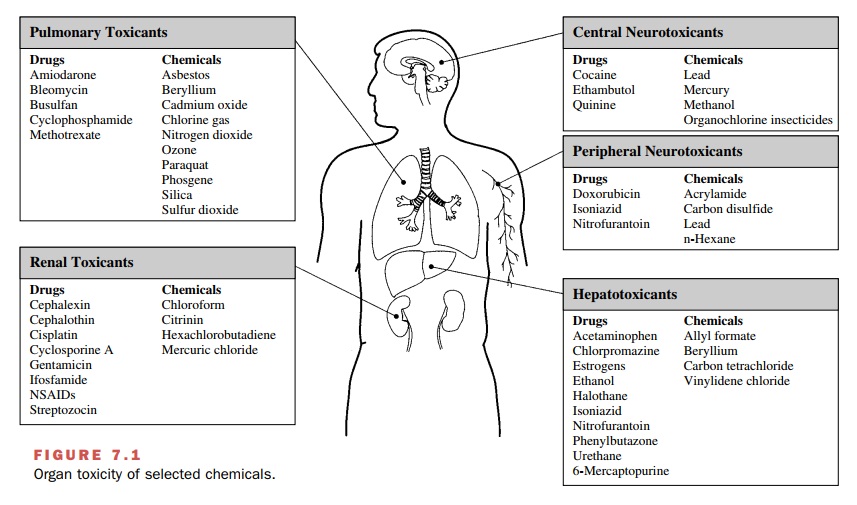 The events that initiate cell death are not completely understood.

The events that initiate cell death are not completely understood. The common final stages of necrotic cell death are disruption of normal metabolic processes and ensuing inability to maintain intracellular electrolyte homeostasis. If the insult is severe or prolonged enough, the cell will not regain normal function. At the same time, other cells show apoptotic cell death, character-ized by cell shrinkage, cleavage of DNA between nucle-osomes, and formation of apoptotic bodies. Some chem-icals are metabolized to reactive products that bind to cellular macromolecules. If such binding impairs the function of crucial macromolecules, cell viability is lost. How severely organ function will be impaired depends on the reserve capacity of that organ. The ultimate out-come will depend on the affected organ’s regenerative capacity and response to damage.

Inhaled gases, solid particles, or liquid aerosols may de-posit throughout the respiratory system, depending on their chemical and physical properties. The large surface area of the respiratory passages and alveolar region and the large volume of air delivered to that area (approxi-mately 6–7 L/minute in a young man) provide great op-portunity for interaction between inhaled materials and lung tissue. Examples of inhaled xenobiotics that cause lung damage and those that have entered the body by ingestion, injection, or dermal absorption are presented in Figure 7.1. 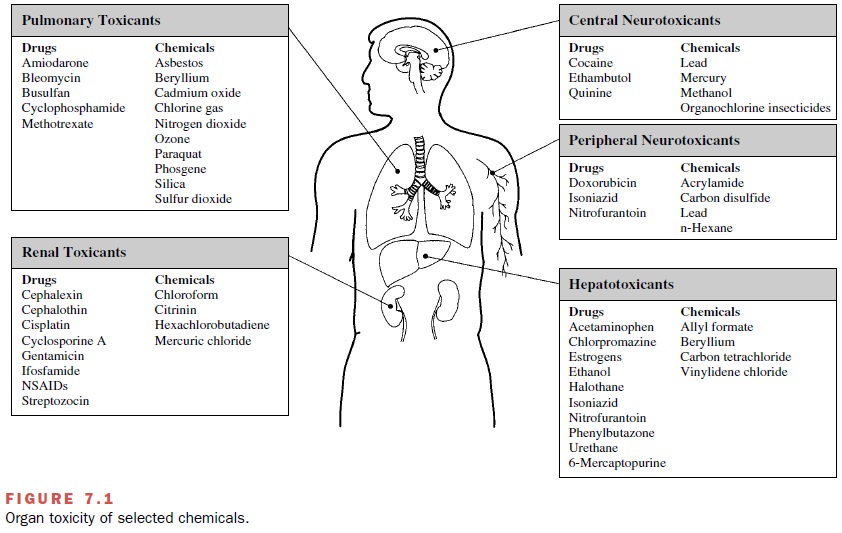 Exposure of the lungs to xenobiotics may result in a number of disease conditions including bronchitis, em-physema, asthma, hypersensitivity pneumonitis, pneu-moconiosis, and cancer. During repair, damaged lung alveolar epithelium may be replaced by fibrous tissue that does not allow for gas exchange, which intensifies the damage caused by the initial lesion.

The blood draining the stomach and small intestine is delivered directly to the liver via the hepatic portal vein, thus exposing the liver to relatively large concentrations of ingested drugs or toxicants (e.g., Fig. 7.1). Hepatic ex-posure to agents that undergo bioactivation to toxic species can be significant.

Hepatic necrosis can be classified by the zone of the liver tissue affected. Xenobiotics, such as acetamino-phen or chloroform, that undergo bioactivation to toxic intermediates cause necrosis of the cells surrounding the central veins (centrilobular) because the compo-nents of the cytochrome P450 system are found in those cells in abundance. At higher doses or in the presence of agents that increase the synthesis of cytochrome P450 (inducers), the area of necrosis may incorporate the midzonal area (midway between the portal triad and central vein). Cells around the portal triad are exposed to the highest concentrations; necrosis occurs with direct-acting agents. A single large dose of a hepato-toxin may cause liver necrosis yet resolve with little or no tissue scarring. Continued exposure to the toxic agent, however, can result in hepatic cirrhosis and per-manent scarring.

Allergic reactions to drugs produce foci of necrosis that are scattered throughout the liver. Other agents cause severe (chlorpromazine) or mild (estrogens) cholestatic liver damage, including cholestasis and inflam-mation of the portal triad and hepatocellular necrosis.

The kidneys are susceptible to toxicity from xenobiotics (Fig. 7.1) because they too have a high blood flow. Cells of the tubular nephron face double-sided exposure, to agents in the blood on the basolateral side and in the fil-tered urine on the luminal side. Proximal tubule cells are generally the site of nephrotoxicity, since these cells have an abundance of cytochrome P450 and can trans-port organic anions and cations from the blood into the cells, thereby concentrating these chemicals manyfold.

Chemically induced kidney damage is typically seen as acute tubular necrosis (ATN). The cells in the proxi-mal tubule are affected. Reabsorption of water, electrolytes, glucose, and amino acids is impaired.

Feedback mechanisms decrease glomerular filtration and thus prevent delivery of large volumes of water to nephron segments. Urine output may be increased, decreased, or unchanged. Markers of glomerular filtration, blood urea nitrogen (BUN) and creatinine, are increased only if fil-tration falls by 80%. The urine may contain glucose and protein, including proteinaceous casts formed in the nephron of tubular debris.

Although the CNS is protected from a number of xeno-biotics by the blood-brain barrier, the barrier is not ef-fective against lipophilic compounds, such as solvents or insecticides (Fig. 7.1). Similarly, the peripheral nervous system is protected by a blood-neural barrier. The bar-riers are less well developed in the immature nervous system, rendering the fetus and neonate even more sus-ceptible to neurotoxicants. Neural tissue susceptibility is due in large part to its high metabolic rate, high lipid content, and for the CNS, high rate of blood flow.

Since damaged neural tissue cannot easily replicate, glial and other nonconducting cells may proliferate and occupy the space of the dead neurons, and the damage may be expressed as deficits of sensory and motor func-tions and behavior. Alternatively, other neurons may take on the functions of the damaged neurons such that there is little or no perceptible damage.

A number of drugs and environmentally and occupa-tionally important chemicals can impair the activity of one or more components of the immune system. Immunodeficiency may result in increased susceptibility to infection, decreased surveillance against precancer-ous or cancerous cells, or tissue-damaging reactions (Table 7.1). Allergic and autoimmune reactions are ex-amples of this form of toxicity. 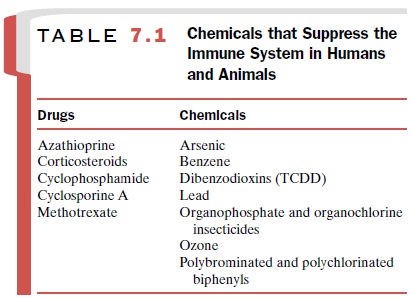 Clinical expressions of cutaneous allergic reactions include eczematous, indurate–inflammatory, and ur-ticarial eruptions. Irritant responses causing direct dam-age to the skin may be confused with allergic responses involving immune mechanisms. An important differ-ence is that allergic reactions require an initial exposure to sensitize the individual; dermatitis is then elicited by minimal subsequent exposure to the agent.

Mutagenesis, teratogenesis, and carcinogenesis are dif-ferent manifestations of damage to genetic material (genotoxicity). Chemically induced genotoxicity occurs in several steps, and at each step there is opportunity for repair.

Generally, xenobiotics are not themselves mutagenic, but rather they must be bioactivated to metabo-lites that are sufficiently reactive to bind to DNA and disrupt its coding. The reactive intermediates must be formed close enough to the DNA to interact with it be-fore interacting with other less important macromole-cules or before being further metabolized to inactive forms. Nongenotoxic carcinogens act by altering cell replication control.

Most drugs and chemicals pose a threat to the develop-ing fetus. An estimated 4 to 5% of developmental de-fects in humans result from prenatal exposure to drugs or environmental chemicals. This is particularly impor-tant, since women with irregular menstrual cycles may be exposed to teratogens and enter the sensitive period of organogenesis before pregnancy is suspected.

Gestation is generally considered to consist of three periods of development, each with differing sensitivities to chemicals. During the preimplantation or prediffer-entiation phase, expression of toxicity is an all-or-none phenomenon; damage to the embryo results in either death or no effect. Organogenesis occurs during the em-bryonic period (the first 3 months of pregnancy), and therefore, susceptibility to teratogenesis is high; the em-bryo is particularly vulnerable to teratogens on days 25 through 40. The fetal period consists of the last 6 months of gestation and is a time of reduced susceptibility to teratogenic alterations. Certain organs, such as the gen-itals and the nervous system, however, are still under-going differentiation during this period. Functional im-pairment in tissues without marked structural damage and growth retardation is the most common effect of chemical exposure during the fetal period.

Chemicals such as 1,2-dibromo-3-chloropropane can disrupt spermatogenesis, leading to impaired repro-ductive function, including sterility. Men and women undergoing cancer chemotherapy with alkylating drugs are at increased risk for sterility.