Worldwide production of chemicals has increased dra-matically in recent decades, resulting in increased hu-man exposure. This applies not only to workers who manufacture the chemicals and final products but also to those who use the products or are exposed through contamination of surface and ground water and air.

Industrial activity has polluted the outdoor air with a number of chemicals known to be hazardous to human health. These include a variety of gases, such as carbon monoxide, ozone, and the oxides of sulfur and nitrogen. Unacceptable levels of air pollutants can occur indoors as well. While some of these pollutants may be the same as for the outdoor air, they also include biological agents (e.g., fungal spores, viruses, bacteria, actino-mycetes), volatile organic compounds, carbon dioxide, and formaldehyde.

Carbon monoxide arises from the incomplete combus-tion of organic material. Of principal concern is its gen-eration by the internal combustion engine and by home heating units, particularly in poorly ventilated areas. Carbon monoxide emission by automobiles in closed garages and by unvented space heaters results in nu-merous deaths each year. Following inhalation, carbon monoxide binds to hemoglobin, displacing oxygen and forming carboxyhemoglobin. This decreases the oxy-gen-carrying capacity of the blood and impairs the blood cells’ ability to release bound oxygen. The result-ing hypoxia is the principal mechanism of carbon monoxide toxicity.

Nitrogen oxides, principally nitrogen dioxide, and ozone are classified as oxidizing pollutants. The major source of nitrogen dioxide is the internal combustion engine. Photolysis of nitrogen dioxide by ultraviolet ra-diation liberates oxygen atoms, which can then combine with molecular oxygen to form ozone. Both gases cause irritation of the deep lung and can result in increased susceptibility to respiratory infection, pulmonary edema, and impaired lung function.

Oxides of sulfur (principally sulfur dioxide) are gen-erated during the burning of fossil fuels, most notably coal, and are classified as reducing pollutants because of the types of reactions they undergo.

Particulate matter associated with most emissions promotes the conver-sion of sulfur dioxide to the more toxic sulfuric acid and facilitates deposition in the deep lungs. The acid can cause bronchospasm and lung damage, including alve-olitis. Asthmatic episodes can be exacerbated by sulfur dioxide and sulfuric acid.

Industrial processes, such as milling and mining, con-struction work, and the burning of wood or fossil fuel, generate particulates that can be directly toxic or can serve as vectors for the transfer of bound material, such as sulfuric acid, metals, and hydrocarbons, into the lungs. Natural products such as pollen, anthrax spores, and animal dander can elicit toxic reactions on inhala-tion or skin contact. The inhalation of asbestos, silica, or coal dust can cause pneumoconiosis, which may develop into serious lung disease. The size of the particle, venti-latory rate, and depth of breathing will determine the extent of pulmonary deposition.

Thousands of substances are added to foods to enhance their marketability (appearance, taste, texture, etc.), storage properties, or nutritive value, any of which may cause toxicity in susceptible individuals (Table 7.4). Microbial or fungal contamination of food, either dur-ing processing or storage, can introduce potent toxins into food.

Characteristics of toxicity for a number of metals are presented in Table 7.5. While the exact tissue and mo-lecular site of the toxic action of each metal is different, toxicity generally results from interaction of the metal with specific functional groups on macromolecules in the cell. These groups include sulfhydryl, carboxyl, amino, phosphoryl, and phenolic moieties. Interactions of such groups with metals can lead to disruption of en-zyme activities and transport processes and eventually to loss of such cellular functions as energy production and ion regulation. 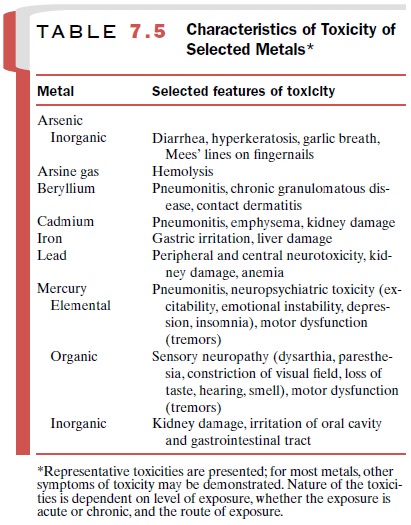 Solvents are generally classified as aliphatic or aro-matic, and either type may be halogenated, most com-monly with chlorine. The toxicity of representative sol-vents is summarized in Table 7.6. Occupational expo-sure to solvents occurs in cleaning, degreasing, painting, and gluing. Exposure to solvents is generally through in-halation of vapors, although direct skin contact also oc-curs. The concentration of solvent in air is determined by the vapor pressure of the solvent, the ambient tem-perature, and the effectiveness of ventilation systems. These factors and the rate of pulmonary air exchange will affect the extent of exposure. Sniffing glue fumes is one form of substance abuse.

Solvents are generally lipid-soluble, and therefore they are readily absorbed across the skin. Once ab-sorbed, they tend to concentrate in the brain, and CNS dysfunction is common at high exposures. Symptoms can range from confusion to unconsciousness. Solvents often undergo bioactivation and may cause systemic toxicity as a result of the formation of reactive interme-diates.

Pesticides are chemicals used to eliminate unwanted or-ganisms. Common targets for pesticides include insects, weeds (herbicides), fungi, and rodents. Poisoning from pesticides often affects professional exterminators, agri-cultural workers, and consumers (Table 7.7). More than half of the poisonings due to agricultural pesticides af-fect children. 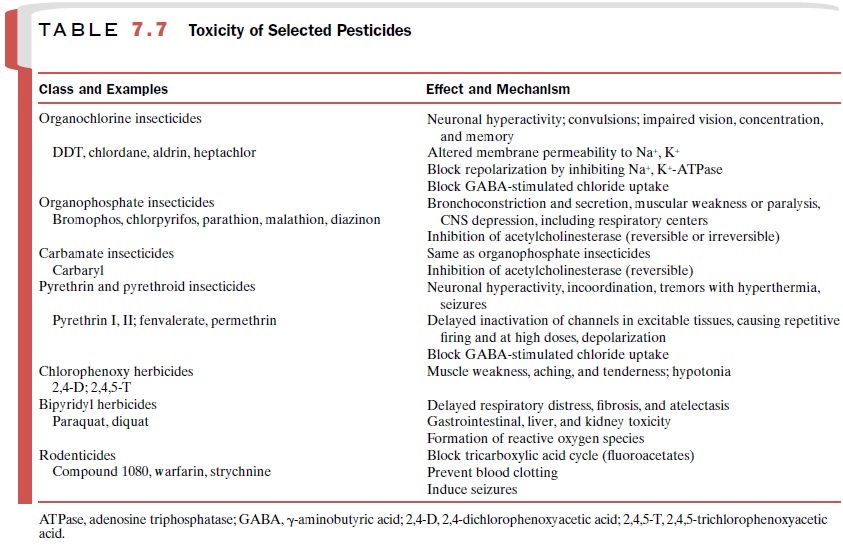 Organophosphate insecticides (e.g., malathion, parathion, diazinon) undergo metabolic activation to yield an oxygenated metabolite that will react with the active site of acetylcholinesterase (AChE), resulting in irreversible enzyme inhibition. Symptoms of poisoning are due to excessive stimulation of cholinergic recep-tors. In cases of lethal poisoning in humans, death is from respiratory failure. Distal neuropathy of the lower limbs also has been seen.

The carbamate insecticides also inhibit AChE. The mechanism of inhibition is similar, but the reaction is re-versible.

Herbicidal activity generally consists of interference with plant-specific biochemical reactions. Thus, mam-malian toxicity is generally low and not predictable from the mechanism of herbicidal action. In contrast, rodenticide target selectivity is not based on differences in biochemistry between humans and rodents but rather on differences in physiology or behavior, especially feeding behavior. For example, an emetic may be in-cluded in a rodenticide formulation to promote vomit-ing in humans who accidentally consume the product; rodents do not have a vomit reflex.

The chlorophenoxy herbicides, 2,4-dichlorophe-noxyacetic acid (2,4-D) and 2,4,5-trichlorophenoxy-acetic acid (2,4,5-T), were used in defoliating operations in Vietnam, and the adverse health effects of the con-taminant 2,3,7,8-tetrachlorodibenzodioxin (dioxin) con-tinue to be controversial.

The bipyridyl herbicides paraquat and diquat are broad-spectrum herbicides. As little as 10 mL of paraquat concentrate is lethal in adults. Paraquat dam-ages the lungs and may result in the appearance of a respiratory distress syndrome appearing 1 or 2 weeks after poisoning. In contrast, diquat causes minimal lung damage because it does not selectively accumulate in the lung. Acute renal failure, liver toxicity, and gastroin-testinal damage are sequelae to diquat poisoning.

Warfarin, a coumarin anticoagulant, is incorporated into cornmeal for use as a rat poison. Repeated expo-sure results in sufficient inhibition of prothrombin syn-thesis to cause fatal internal hemorrhage.