Osteosarcoma (osteogenic sarcoma) is the most common primary malignant tumor of bone.

Osteosarcoma (osteogenic sarcoma) is the most common primary malignant tumor of bone. It occurs more frequently in males than in females, with most cases in teenage years (ages 10–25). Patients with familial retinoblastoma have a high risk.

Osteosarcoma presents with localized pain and swelling. The classic x-ray findings are Codman triangle (periosteal elevation), “sun burst” pattern, and bone destruc-tion. Treatment is surgery and chemotherapy. The prognosis is poor, but is improved with aggressive management such as resection of single pulmonary metastases (hematogenous metastasis to the lungs is common). Secondary osteosarcoma is seen in the elderly; these highly aggressive tumors are associated with Paget disease, irradiation, and chronic osteomyelitis. 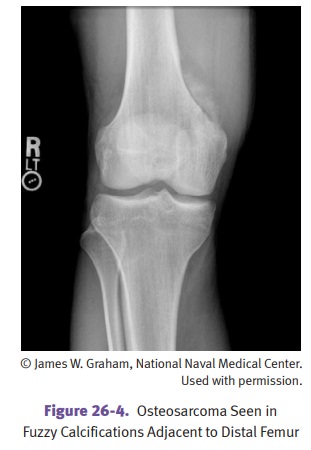 Chondrosarcoma is a malignant tumor of chondroblasts which may arise de novo or secondary to a preexisting enchondroma, exostosis, or Paget disease. Males are affected more frequently than females, with peak ages 30–60. It presents with enlarg-ing mass with pain and swelling, and it typically involves the pelvic bones, spine, and shoulder girdle. Microscopically, there is cartilaginous matrix production. Radio-graphs show osteolytic destruction and “popcorn” calcification. The 5-year survival is predicted by histologic differentiation. 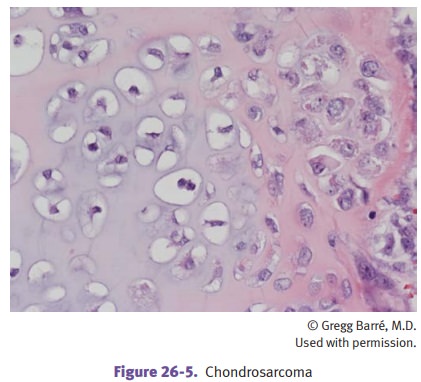 Ewing sarcoma is a malignant neoplasm of undifferentiated cells arising within the marrow cavity. Males are affected slightly more often than females, with most cases in teenage years (ages 5–20). The classic translocation for Ewing sarcoma is t(11;22), which produces the EWS-FLI1 fusion protein.

Grossly, Ewing sarcoma often affects the diaphyses of long bones, with the most com-mon sites being the femur, pelvis, and tibia. The tumor characteristically produces a white-tan mass with necrosis and hemorrhage. Microscopically, Ewing sarcoma is characterized by sheets of undifferentiated small, round, blue cells resembling lymphocytes, which may form Homer Wright pseudorosettes. The tumor cells erode through the cortex and periosteum and invade surrounding tissues.