Chapter: Medical Physiology: Local and Humoral Control of Blood Flow by the Tissues

Thus far, most of the mechanisms for local blood flow regulation that we have discussed act within a few seconds to a few minutes after the local tissue conditions have changed.

Thus far, most of the mechanisms for local blood flow regulation that we have discussed act within a few seconds to a few minutes after the local tissue conditions have changed. Yet, even after full activation of these acute mechanisms, the blood flow usually is adjusted only about three quarters of the way to the exact additional requirements of the tissues. For instance, when the arterial pressure suddenly is increased from 100 to 150 mm Hg, the blood flow increases almost instantaneously about 100 per cent. Then, within 30 seconds to 2 minutes, the flow decreases back to about 15 per cent above the origi-nal control value. This illustrates the rapidity of the acute mechanisms for local blood flow regulation, but at the same time, it demonstrates that the regulation is still incomplete because there remains an excess 15 per cent increase in blood flow. 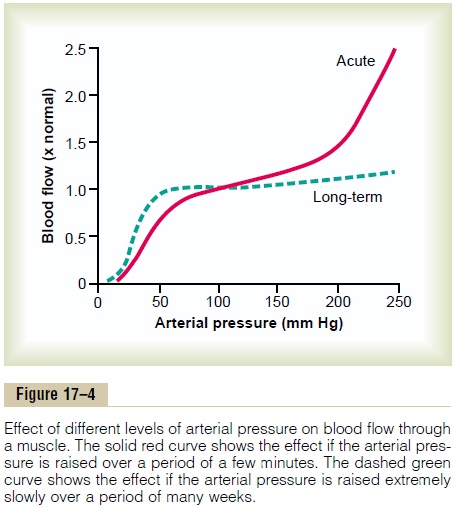 Long-term regulation of blood flow is especially important when the long-term metabolic demands of a tissue change. Thus, if a tissue becomes chroni-cally overactive and therefore requires chronically increased quantities of oxygen and other nutrients, the arterioles and capillary vessels usually increase both in number and size within a few weeks to match the needs of the tissue—unless the circulatory system has become pathological or too old to respond.

Thus, there is actual physical reconstruction of the tissue vasculature to meet the needs of the tissues. This reconstruction occurs rapidly (within days) in extremely young animals. It also occurs rapidly in new growth tissue, such as in scar tissue and cancerous tissue; however, it occurs much more slowly in old, well-established tissues. Therefore, the time required for long-term regulation to take place may be only a few days in the neonate or as long as months in the elderly person. Furthermore, the final degree of response is much better in younger tissues than in older, so that in the neonate, the vascularity will adjust to match almost exactly the needs of the tissue for blood flow, whereas in older tissues, vascularity fre-quently lags far behind the needs of the tissues.

Role of Oxygen in Long-Term Regulation. Oxygen is impor-tant not only for acute control of local blood flow but also for long-term control. One example of this is increased vascularity in tissues of animals that live at high altitudes, where the atmospheric oxygen is low. A second example is that fetal chicks hatched in low oxygen have up to twice as much tissue blood vessel conductivity as is normally true.This same effect is also dramatically demonstrated in premature human babies put into oxygen tents for therapeutic purposes.

The excess oxygen causes almost immediate cessation of new vascular growth in the retina of the premature baby’s eyes and even causes degeneration of some of the small vessels that already have formed. Then when the infant is taken out of the oxygen tent, there is explosive overgrowth of new vessels to make up for the sudden decrease in available oxygen; indeed, there is often so much overgrowth that the retinal vessels grow out from the retina into the eye’s vitreous humor; and this eventually causes blindness. (This condition is called retrolental fibroplasia.)

A dozen or more factors that increase growth of new blood vessels have been found, almost all of which are small peptides. Three of those that have been best characterized are vascular endothelial growth factor(VEGF), fibroblast growth factor, and angiogenin, eachof which has been isolated from tissues that have inad-equate blood supply. Presumably, it is deficiency of tissue oxygen or other nutrients, or both, that leads to formation of the vascular growth factors (also called “angiogenic factors”).

Essentially all the angiogenic factors promote new vessel growth in the same way. They cause new vessels to sprout from other small vessels. The first step is dis-solution of the basement membrane of the endothelial cells at the point of sprouting. This is followed by rapid reproduction of new endothelial cells that stream outward through the vessel wall in extended cords directed toward the source of the angiogenic factor. The cells in each cord continue to divide and rapidly fold over into a tube. Next, the tube connects with another tube budding from another donor vessel (another arteriole or venule) and forms a capillary loop through which blood begins to flow. If the flow is great enough, smooth muscle cells eventually invade the wall, so that some of the new vessels eventually grow to be new arterioles or venules or perhaps even larger vessels. Thus, angiogenesis explains the manner in which metabolic factors in local tissues can cause growth of new vessels.

Certain other substances, such as some steroid hor-mones, have exactly the opposite effect on small blood vessels, occasionally even causing dissolution of vas-cular cells and disappearance of vessels. Therefore, blood vessels can also be made to disappear when not needed.

Vascularity Is Determined by Maximum Blood Flow Need, Not by Average Need. An especially valuable characteristicof long-term vascular control is that vascularity is determined mainly by the maximum level of blood flow need rather than by average need. For instance, during heavy exercise the need for whole body blood flow often increases to six to eight times the resting blood flow. This great excess of flow may not be required for more than a few minutes each day. Nev-ertheless, even this short need can cause enough VEGF to be formed by the muscles to increase their vascularity as required. Were it not for this capability, every time that a person attempted heavy exercise, the muscles would fail to receive the required nutrients, especially the required oxygen, so that the muscles simply would fail to contract.

However, after extra vascularity does develop, the extra blood vessels normally remain mainly vasocon-stricted, opening to allow extra flow only when ap-propriate local stimuli such as oxygen lack, nerve vasodilatory stimuli, or other stimuli call forth the required extra flow.