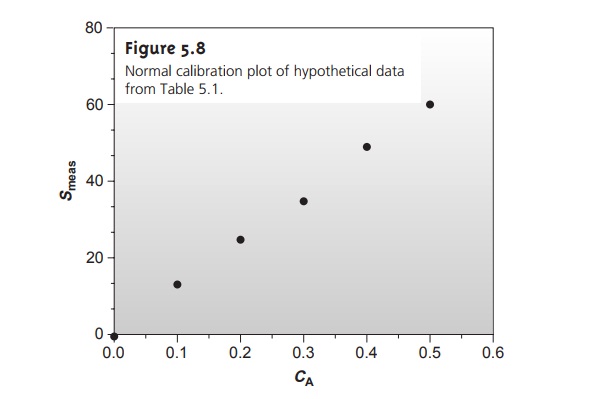 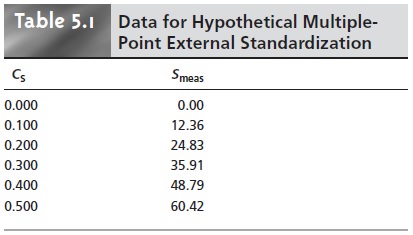 Table 5.2 demonstrates how an uncorrected constant error affects our determination of k. The first three columns show the concentration of analyte, the true measured signal (no constant error) and the true value of k for five standards. As expected, the value of k is the same for each standard. In the fourth column a constant determinate error of +0.50 has been added to the measured signals. The corresponding val- ues of k are shown in the last column. Note that a different value of k is obtained for each standard and that all values are greater than the true value. As we noted, this is a significant limitation to any single-point standardization. 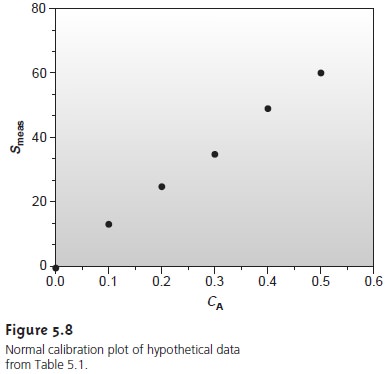 where y is the signal and x is the amount of analyte. The constants β0 and β1 are the true y-intercept and the true slope, respectively. The goal of linear regres- sion is to determine the best estimates for the slope, b1, and y-intercept, b0. This is accomplished by minimizing the residual error between the experimental val- ues, yi, and those values, yˆi, predicted by equation 5.12 (Figure 5.9). For obvious reasons, a regression analysis is also called a least-squares treatment. Several ap- proaches to the linear regression of equation 5.12 are discussed in the following sections. 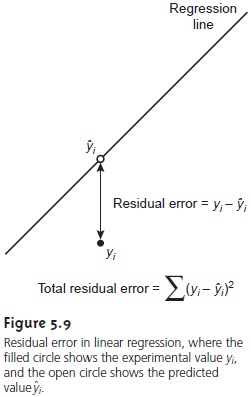 The most commonly used form of linear regression is based on three assump- tions: (1) that any difference between the experimental data and the calculated regression line is due to indeterminate errors affecting the values of y, (2) that these indeterminate errors are normally distributed, and (3) that the indetermi- nate errors in y do not depend on the value of x. Because we assume that indeter- minate errors are the same for all standards, each standard contributes equally in estimating the slope and y-intercept. For this reason the result is considered an unweighted linear regression.

The second assumption is generally true because of the central limit theorem. The validity of the two remaining assumptions is less cer- tain and should be evaluated before accepting the results of a linear regression. In particular, the first assumption is always suspect since there will certainly be some indeterminate errors affecting the values of x. In preparing a calibration curve, however, it is not unusual for the relative standard deviation of the mea- sured signal (y) to be significantly larger than that for the concentration of ana- lyte in the standards (x). In such circumstances, the first assumption is usually reasonable.

Finding the Estimated Slope and y-Intercept

The derivation of equations for cal- culating the estimated slope and y-intercept can be found in standard statistical texts7 and is not developed here. The resulting equation for the slope is given as

Although equations 5.13 and 5.14 appear formidable, it is only necessary to evaluate four summation terms. In addition, many calculators, spreadsheets, and other com- puter software packages are capable of performing a linear regression analysis based on this model. To save time and to avoid tedious calculations, learn how to use one of these tools. For illustrative purposes, the necessary calculations are shown in de- tail in the following example. 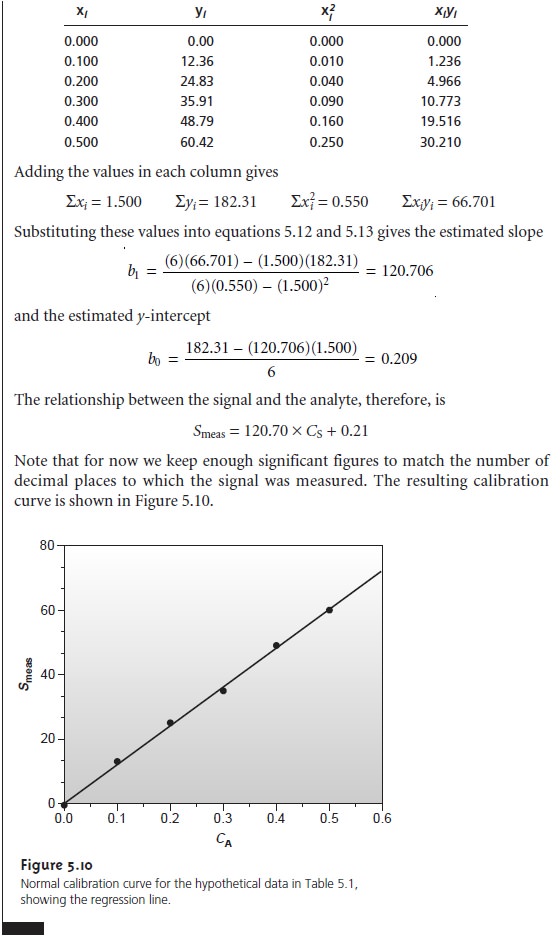 Uncertainty in the Regression Analysis 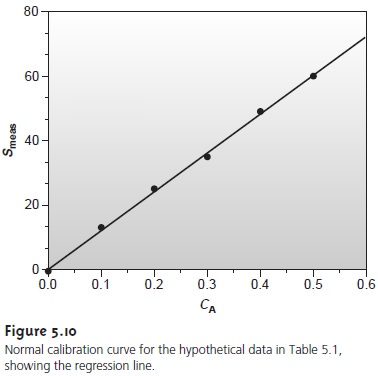 This is called the standard deviation about the regression, sr, and is given as

There is an obvious similarity between equation 5.15, except that the sum of squares term for sr is determined rela- tive to yˆi instead of yˆ, and the denominator is n – 2 instead of n – 1; n – 2 indicates that the linear regression analysis has only n – 2 degrees of freedom since two pa- rameters, the slope and the intercept, are used to calculate the values of yˆi.

where t is selected for a significance level of α and for n – 2 degrees of freedom. Note that the terms tsb1 and tsb0 do not contain a factor of (Root of n )–1 because the con-fidence interval is based on a single regression line. Again, many calculators, spread- sheets, and computer software packages can handle the calculation of sb0 and sb1 and the corresponding confidence intervals for β0 and β1. Example 5.11 illustrates the calculations. 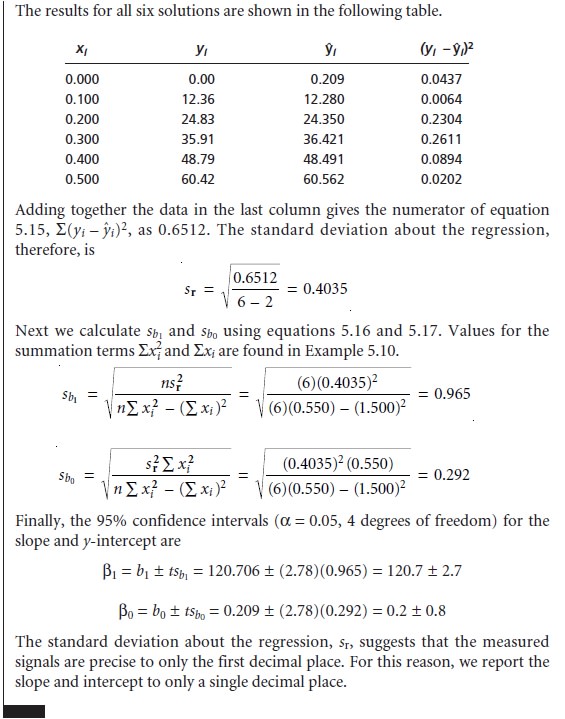 To minimize the uncertainty in the predicted slope and y-intercept, calibration curves are best prepared by selecting standards that are evenly spaced over a wide range of concentrations or amounts of analyte. The reason for this can be rational- ized by examining equations 5.16 and 5.17. For example, both sb0 and sb1 can be minimized by increasing the value of the term Σ(xi –  x    ‘  )2, which is present in the de-

where μX is the expected value of X in the absence of determinate errors, and the value of t is determined by the desired level of confidence and for n – 2 degrees of freedom. The following example illustrates the use of these equations for an analysis using a normal calibration curve with external standards. 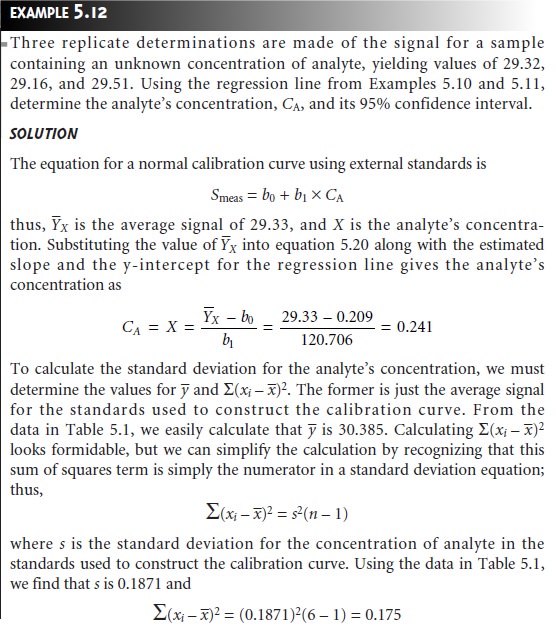 In a standard addition the analyte’s concentration is determined by extrapolating the calibration curve to find the x-intercept. In this case the value of X is

where n is the number of standards used in preparing the standard additions cali- bration curve (including the sample with no added standard), and –y is the average signal for the n standards. Because the analyte’s concentration is determined by ex- trapolation, rather than by interpolation, sX for the method of standard additions generally is larger than for a normal calibration curve.

Equations 5.13 for the slope, b1, and 5.14 for the y-intercept, b0, assume that indeterminate errors equally affect each value of y. When this assumption is false, as shown in Figure 5.11b, the variance associated with each value of y must be included when estimating β0 and β1. In this case the predicted slope and intercept are

where wi is a weighting factor accounting for the variance in measuring yi. Values of

where si is the standard deviation associated with yi. The use of a weighting factor ensures that the contribution of each pair of xy values to the regression line is proportional to the precision with which yi is measured. 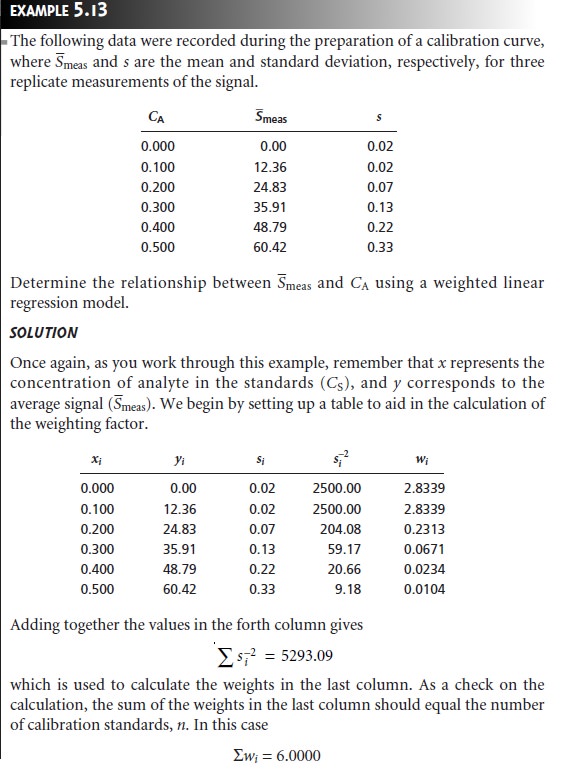 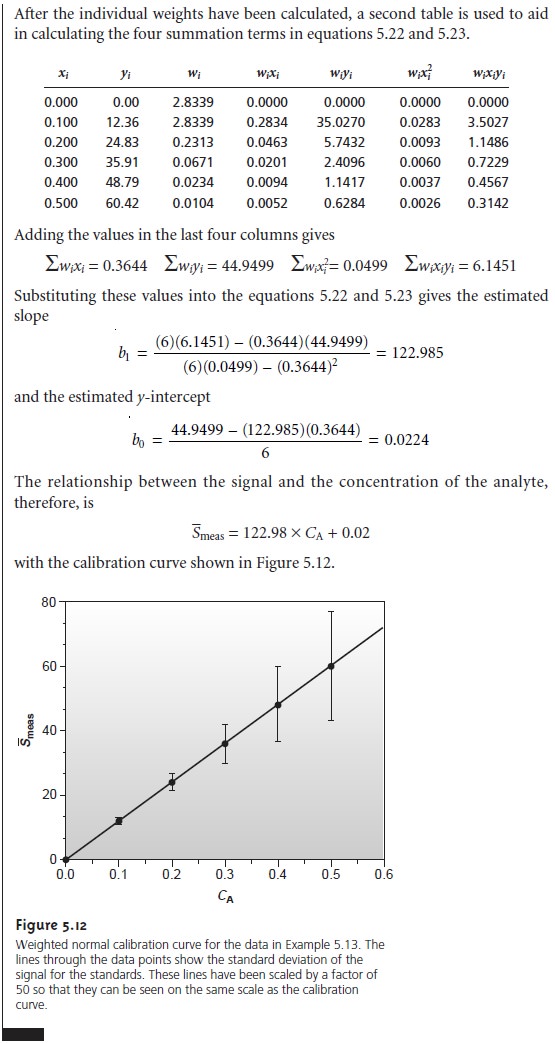 Equations for calculating confidence intervals for the slope, the y-intercept, and the concentration of analyte when using a weighted linear regression are not as easily defined as for an unweighted linear regression. The  confidence in- terval for the concentration of an analyte, however, will be at its optimum valuewhen the analyte’s signal is near the weighted centroid, –y, of the calibration curve

Weighted Linear Regression with Errors in Both x and y

If we remove the assumption that the indeterminate errors affecting a calibration curve are found only in the signal (y), then indeterminate errors affecting the preparation of standards containing known amounts of analyte (x) must be fac- tored into the regression model. The solution for the resulting regression line is computationally more involved than that for either the unweighted or weighted regression lines, and is not presented in this text.

Regression models based on a straight line, despite their apparent complexity, use the simplest functional relationship between two variables. In many cases, calibra- tion curves show a pronounced curvature at high concentrations of analyte (see Figure 5.3b). One approach to constructing a calibration curve when curvature exists is to seek a transformation function that will make the data linear. Logarithms, expo- nentials, reciprocals, square roots, and trigonometric functions have all been used in this capacity. A plot of y versus log x is a typical example. Such transformations are not without complications. Perhaps the most obvious is that data that originally has a uniform variance for the y values will not maintain that uniform variance when the variable is transformed.

The regression models considered earlier apply only to functions containing a single independent variable. Analytical methods, however, are frequently subject to determinate sources of error due to interferents that contribute to the measured sig- nal. In the presence of a single interferent, equations 5.1 and 5.2 become

where kI is the interferent’s sensitivity, nI is the moles of interferent, and CI is the in- terferent’s concentration. Multivariate calibration curves can be prepared using standards that contain known amounts of analyte and interferent.