In discussing ways to standardize a method, we assumed that an appropriate reagent blank had been used to correct Smeas for signals originating from sources other than the analyte.

In one study, analytical chemists were asked to evaluate a data set consist- ing of a normal calibration curve, three samples of different size but drawn from the same source, and an analyte-free sample (Table 5.3). At least four different approaches for correcting the signals were used by the participants: (1) ignore the correction entirely, which clearly is incorrect; (2) use the y-intercept of the calibration curve as a calibration blank, CB; (3) use the analyte-free sample as a reagent blank, RB; and (4) use both the calibration and reagent blanks. Equa- tions for calculating the concentration of analyte using each approach are shown in Table 5.4, along with the resulting concentration for the analyte in each of the three samples. 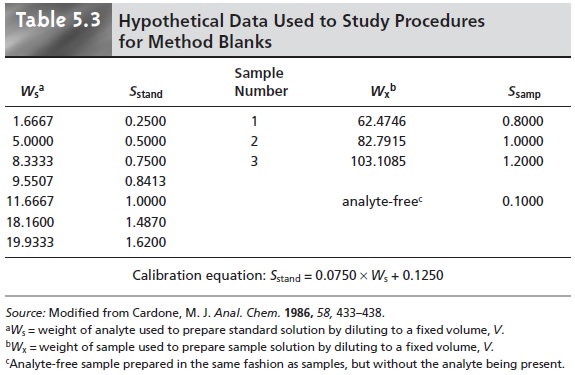 To correct for all constant method errors, a blank must account for signals due to the reagents and solvent used in the analysis and any bias due to interactions between the analyte and the sample matrix.

Both the calibration blank and the reagent blank correct for signals due to the reagents and solvents. Any differ- ence in their values is due to the number and composition of samples contribut- ing to the determination of the blank.

Unfortunately, neither the calibration blank nor the reagent blank can cor- rect for bias due to analyte–matrix interactions because the analyte is missing in the reagent blank, and the sample’s matrix is missing from the calibration blank. The true method blank must include both the matrix and the analyte and, conse- quently, can only be determined using the sample itself. One approach is to mea- sure the signal for samples of different size and determine the regression line from a plot of signal versus the amount of sample. The resulting y-intercept gives the signal for the condition of no sample and is known as the total Youden blank.13 This is the true blank correction. The regression line for the sample data in Table 5.3 is

giving a true blank correction of 0.185. Using this value to correct the signals gives identical values for the concentration of analyte in all three samples (see Table 5.4, bottom row).

The total Youden blank is not encountered frequently in analytical work, because most chemists rely on a calibration blank when using calibration curves and rely on reagent blanks when using a single-point standardization. As long as any constant bias due to analyte–matrix interactions can be ignored, which is often the case, the accuracy of the method will not suffer. It is always a good idea, however, to check for constant sources of error, by analyzing samples of different sizes, before relying on either a calibration or reagent blank.