Liberation Struggles in Indonesia and Philippines

Mao’s victory, following the independence of India, sent a message that imperialism could be defeated in the colonies.

Liberation Struggles in Indonesia and Philippines

Mao’s victory, following the independence of India, sent a message that imperialism could be defeated in the colonies. But in Southeast Asia, especially in the Philippines and Indonesia, nationalism was in its nascent stage and no substantial progress could be made towards achieving self-government until the dawn of the 20th century. Three and a half years of Japanese occupation resulted in the loss of prestige to the European colonial powers, with the national movements emerging strong and powerful. But after the defeat of Japan in 1945, Western powers sought to return to their territories. At first they tried to return as colonial rulers, but a brief period of rule proved that this to be unrealistic. This resulted in the Dutch and American attempts to hand over power to friendly, moderate nationalist regimes that could block the rise of communism which was ascendant after the end of the World War.

The Dutch had occupied Java and Sumatra since about 1640. In the second half of the nineteenth century they conquered the outer islands of the East Indies. During the nineteenth century the Dutch were mainly interested in economic, not political control. Most of the population relied on fishing and agriculture. Many worked on European sugar, tobacco, tea and coffee plantations. Heavy investment in these plantations and other concerns with the discovery of oil (1900) and the resultant growth of exports and import all made this area a valuable colony for the Dutch. 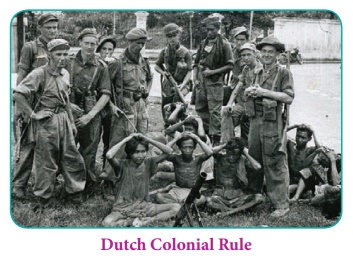 The nationalist movement in East Indies took shape much later than in the Philippines. This is because the Dutch were slow in introducing Western education. In the Philippines the Eurasians identified themselves with the native cause and became the leaders of the nationalist movement. The Dutch, in contrast, largely free of racial prejudice, intermarried with the natives and accepted the Eurasians in their society. The Eurasians considered their interests as those of the Dutch.

The first clear manifestation of nationalism in the East Indies was in 1908, when the first native political society Boedi Oetomo (High Endeavour) was organised. The society was founded by students of the first Dutch medical school at the instance of their senior Wahidin Sudirohusodo. The idea was that the native intellectuals should take the lead in working for the educational advancement of the country. It turned out to be a cultural body, consisting mainly of civil servants and students from Java. Boedi Oetomo soon became defunct and a more popular political society Sarekat Islam (Muslim Union) emerged.

Sarekat Islam was formed mainly to fight against the economic power of the Chinese. But it gradually became a socialist and nationalist body. In 1916 it passed a resolution demanding self-government. In two years its membership increased from 350,000 to two and a half million. Encouraged by the Russian Revolution of 1917 the communists within Sarekat Islam attempted to gain control of the movement. As they failed, they left and formed the Indonesian Communist Party in 1919.

Efforts at delegating powers to the local governments had already been initiated with the passage of a Decentralisation Law in 1903. Provincial councils were established in the following year. But the Indonesians played no part in the government. In view of the growing nationalist agitation the Dutch government created a People’s Parliament, Volksraad (1918) in Weltevreden, Batavia (Jakarta), Java, and this continued to function until 1942.

During the 1920s, the Communists and Sarekat Islam vied with each other in dominating the nationalist movement. In this rivalry for leadership the communists were successful. They organised strikes which culminated in a big uprising in 1926–27 in western Java and Sumatra. This was immediately crushed. Thousands were imprisoned and this caused a temporary setback to the Communist Party. Around this time a young engineer named Sukarno organised the Indonesian Nationalist Party. This third party in the country was supported by the westernised secular middle class. But in 1931 the police raided the headquarters of this party. Sukarno was imprisoned and the party he founded was dissolved. 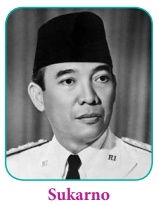 During the 1930s, in the wake of the economic depression that resulted in unemployment, wage cuts and increased protests, the government resorted to repression and press censorship to check nationalism. Sukarno and other nationalist leaders were languishing in jail until 1942. The Dutch surrendered to the Japanese in the East Indies in March 1942. Some opposed the Japanese and organised secret resistance. Some led by Sukarno and Hatta believed that the best method of achieving independence would be to support the Japanese. In the last phase of the war the Japanese decided to negotiate the terms of independence with the Indonesian leaders.

But after Japanese evacuation, in accordance with the decisions of the Potsdam Conference, British forces landed in the East Indies in September 1945. They released about 200,000 prisoners of war, mainly Dutch. The Dutch had reoccupied nearly all the East Indian islands except Java and Sumatra, ruled by Sukarno. The Dutch refused to recognise the rule of Sukarno. Yet he refused to relinquish his office as President. So the British-occupying force arranged negotiations which led to Dutch-Indonesian Agreement. This resulted in Dutch recognition of Java and Sumatra as an independent republic, leading to the merger of the rest of the islands to form a federation known as the United States of Indonesia. Subsequently, the Dutch attempted to disrupt the peace in Indonesia twice, but the pressure of world opinion, led by Jawaharlal Nehru as well as the UN Security Council, led to a settlement favourable to Indonesia at the end of 1949. A round table conference held at The Hague adopted a constitution for the independent state of Indonesia. In December 1949 Indonesia became an independent state. 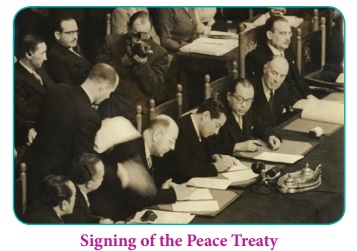 About 7000 islands named after the Spanish prince Philip, son of King Charles V, came to form the Philippines. Like the East Indies, the Philippines had experienced European rule since the sixteenth century. Spanish colonisation began with the expedition of Miguel Lopez de Legazpi in February 1565. Following this, Spain ruled the Philippines for over 300 years, imposing its language, culture and religion on the local population. Nationalism developed among the Filipinos earlier than elsewhere. The brutal way by which the Cavite uprising (20 January 1872), involving 200 Filipino troops and workers at the Cavite arsenal, was crushed served to promote the nationalist cause. A number of Filipino intellectuals were arrested and after a brief trial, three priests (Jose Burgos, Jacinto Zamora, and Mariano Gomez) were publicly executed and became martyrs. 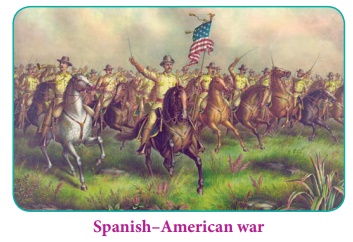 The dispute between America and Spain arising out of America’s interest in Cuba snowballed into the Spanish–American war. In view of the mounting pressure building up internally, Spain had already decided to grant Cuba limited powers of self-government. But the U.S. Congress demanded the withdrawal of Spain’s armed forces forthwith from the island. The Congress authorised the use of force to secure that withdrawal. As Spain dodged, the U.S. declared war on 25 April 1898. Spain had readied neither its army nor its navy for a distant war with the formidable power of the United States. So it was an easy victory for the US. By the Treaty of Paris (signed on 10 December 1898), Spain renounced all claim to Cuba, ceded Guam and Puerto Rico to the United States, and transferred sovereignty over the Philippines to the United States. 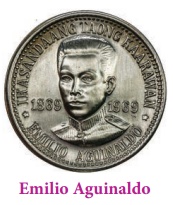 Aguinaldo and other Cavite rebels, while fighting the Spanish army, won major victories in many battles, driving the Spanish out. On May 28, 1898, Aguinaldo gathered a orce of about 18,000 troops and fought against a small Spanish garrison in Alapan, Imus, Cavite. After the victory at Alapan, Aguinaldo unfurled the Philippine flag for the first time, and hoisted it at the Teatro Caviteño in Cavite Nuevo (present-day Cavite City) in front of Filipino revolutionaries and more than 300 captured Spanish troops. Emilio Aguinaldo was elected the first president of the new republic with the proclamation of Malolos Constitution. The Philippine Republic endured until the capture of Emilio Aguinaldo by the American forces on March 23, 1901 that resulted in the dissolution of the First Republic.

The nationalists of Philippines thought the issue for America was Cuba. But soon found out that they had only exchanged one master for another. Frustrated by the outcome of Spanish-American War they resorted to guerrilla warfare. The nationalist opposition to the American government was encouraged by a lobby in the US and so the government felt obliged to create representative institutions at an early date. In the wake of American rule (1902), most of the primary colonial institutions were firmly established: an English language education system; an examination-based civil service; a judicial system with provincial courts; a system of municipal and provincial governments based on election, and finally an elected national legislature. In the election held for the 80-member Assembly, the Nationalist Party won a majority.

The Nationalist Party, however, continued to demand self-government. The leader of the party, Quezon, said, ‘We should prefer to rule ourselves in Hell to being ruled by others in Heaven.’ In the 1930s, during the Depression years, there were serious left-wing risings. The Partido Komunista ng Pilipinas (PKP) founded in 1930 was declared illegal by the U.S. colonial authorities. Yet the communist pressure persuaded the United States government to agree to internal self-government.

The Partido Komunista ng Pilipinas (The Communist Party of the Philippines) and the Huk Rebellion: Though outlawed by the American government, the Partido Komunista ng Pilipinas regained its legality later and was at the helm of the Hukbalahap, the People’s Army against the Japanese Aggression. Hukbalahap was a strong guerrilla organisation and with the re-conquest of the Philippines by the returning American forces, the PKP and the communist peasants (known as Huks) found themselves under attack by their presumed wartime allies. Huk areas were bombarded by government forces and, as a result, the PKP resorted to guerrilla warfare. At first they adopted it as a defensive posture. But in 1950 the party adopted a strategy for the seizure of power. By the mid-1950s, however, the “Huk rebellion” had been crushed by the Philippine government, assisted by the U.S. 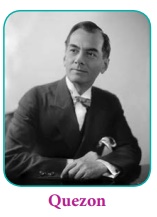 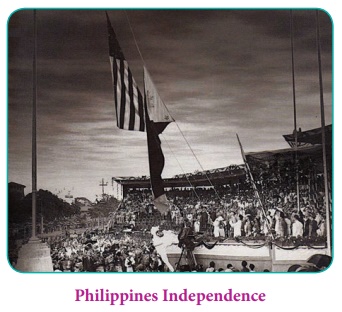 After ending the aggression of Japan, the US honoured its promise given in the Act. In April 1946 elections were held, and on 4 July the Philippines became independent. USA left the Philippines but provided military training and financial support against Huks between 1946 and 1954. Throughout the period the country was one of the USA’s most loyal allies. The country was one of only three Asian states to join the US-dominated South East Asian Treaty Organisation (SEATO) in 1954.