The principal lateral meristems are the vascular cambium and the cork cambium (phellogen).

The principal lateral meristems are the vascular cambium and the cork cambium (phellogen). The vascular cambium, a feature of dicotyledons and gymnosperms and other higher plants, is described briefly below. It con-sists of one to several layers of thin-walled cells arranged in a cylinder, and its actual thickness is difficult to define, since those cells cut off to the outer side develop into phloem, and those on the inner side into xylem and devel-opment is gradual, so early stages of either tissue may still look like cambial initials. Normally, many more of the products of divisions of the cambial initials are xylem than phloem cells. Formation of new layers of xylem ef-fects the displacement of the cambium itself away from the centre. Some of the cambial initials divide anticlinally to allow for the necessary increase in circumference, which grows at approximately six times that of the radius (i.e. 2πr). The first formed cambial initials are axially elongated or fusiform initials. From these the elongated cells of the xylem develop. Some of these become subdivided, by one, two or more cell divisions, to form an axially oriented row of shorter cells, the ray initials. From these the rays develop (Fig. 2.6). 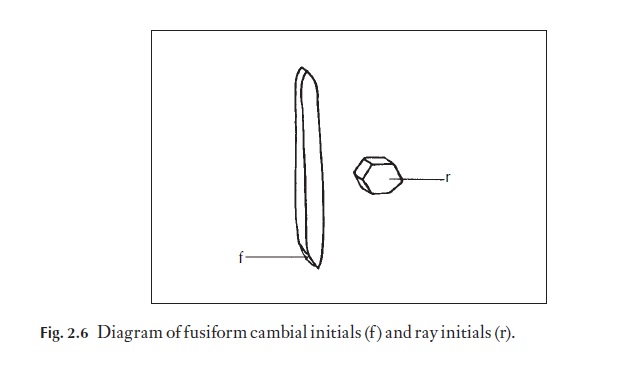 The phellogen can arise near the epidermis, or deeper into the cortex, as a cylinder of cells. It divides to form several layers of thin-walled, radially flattened cells to its inner side, called the phelloderm, and phellem to the outer side, the radially flattened cells of which may all become thicker-walled, and a fatty substance called suberin is incorporated into the walls. In some species, several layers of suberized cells are separated by layers of thin-walled parenchyma cells, so that alternating bands are produced. Often to the inner side of the stomata of the original epidermis, the suberized cells are not flattened, but rounded, and have air spaces between them. These are the lenticels.

In monocotyledons that have secondary thickening, the lateral meris-tems form in the cortex and produce both vascular bundles and ground tis-sue, as described above.