There are detailed differences between the meristems at the apex of shoot and root of monocotyledons, dicotyledons and gymnosperms.

There are detailed differences between the meristems at the apex of shoot and root of monocotyledons, dicotyledons and gymnosperms. Three shoot apices are shown in Fig. 2.1. 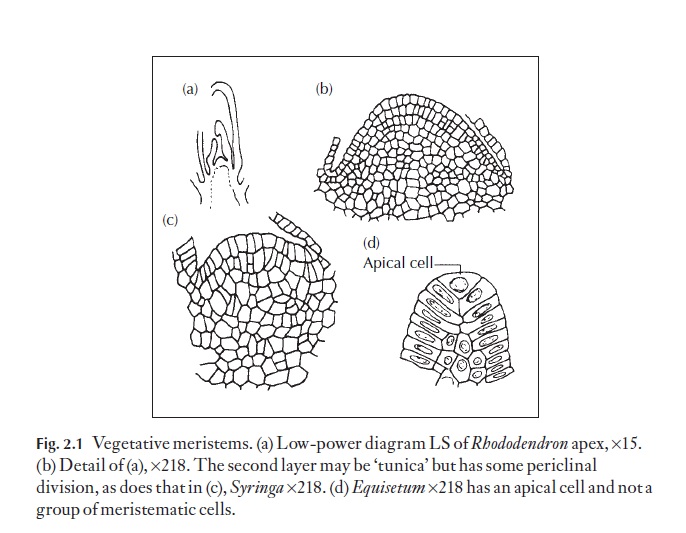 Since the earliest observations, writers have attempted to classify the various layers of cells in apices that are visible in longitudinal sections. Clas-sification of these layers is made based on the fate of cells derived from the distinct layers, or on the dominant planes of cell division apparent in the layers. For example, in the tunica and corpus theory, the (outer) tunica lay-ers are distinguished from the inner, corpus layers because their cell divi-sions normally occur in the anticlinal plane only (that is, at right angles to the surface of the plant). In the corpus, divisions are both anticlinal and periclinal. Periclinal divisions are parallel with the outer surface of the plant. If a formal naming of layers must be made, the tunica–corpus system is more reliable than Hanstein’s dermatogen–periblem–plerome system. In Hanstein’s system, the layers are defined in relation to the tissue systems to which they are purported to give rise. It has been shown by experiment that particular layers do not consistently produce the same tissue system in the same species. As such, it is possibly better to use a topographic system and label layers L1, L2, L3, etc., and define various zones descriptively.

In the shoot apex, leaves usually arise from the tunica layers normally (Ll, or L1 and L2) and buds from the tunica and some corpus layers. The tu-nica produces the epidermis and usually most if not all the cortex. Usually the mature epidermis is composed of one layer of cells, but in some species cell divisions occur very early in the epidermis during the development of leaves, leading to the production of a multiple epidermis. This can be seen in Fig. 2.2, part of the apex of Codonanthe sp. (Gesneriaceae). Part of the ma-ture multiple epidermis of this plant is shown in Fig. 2.2. The corpus pro-duces the vascular system of the stem and the central ground tissue. Occasionally, the cells below the apical meristem proper may appear to be a relatively inactive zone with little or no division; this region is termed the quiescent zone, but its inactive state is not acknowledged by all, and experi-ments using radioactive tracers indicate that there is some cell division in these regions, albeit significantly less than the regions surrounding it. A regular rib-like arrangement of cells can also be detected in some apices below the tunica and corpus. The cells of the meristem have dense cyto-plasm, lacking large vacuoles (liquid-filled spaces within the cytoplasm). Below the apical areas of active cell division, the cells begin to enlarge and vacuolate. 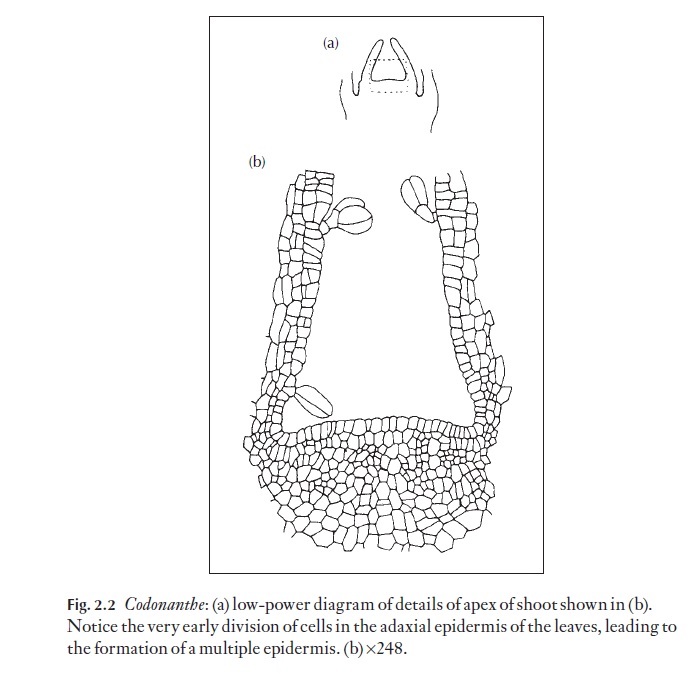 Attempts have been made to define different types of organization of the cell zones in both gymnosperms and angiosperms, and these types may have some significance in indicating interrelationships. They go beyond the scope of this book, but the interested reader can follow up references in the further reading section at the end of the book.

As leaf buttresses arise in sequence at the shoot apex, in the phyllotaxy (leaf arrangement on the stem) characteristic of the particular species, the procambial strands become apparent, and from them are derived the first formed phloem and then the xylem of the primary bundles. Figure 2.3 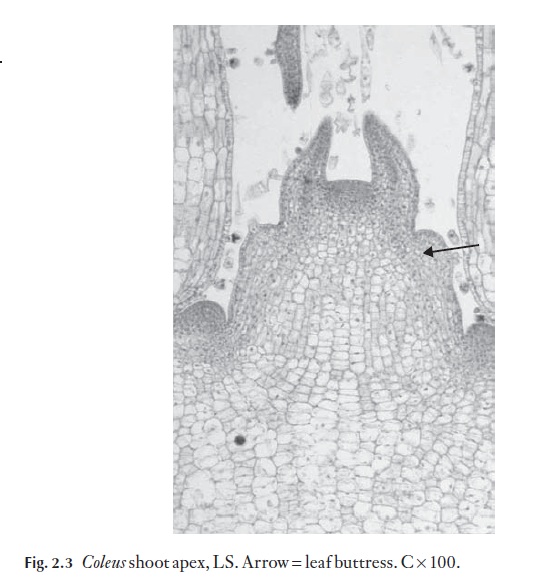 shows leaf buttresses (arrow) in Coleus longitudinal section. Many experi-ments have been conducted to try to discover the mechanisms that regulate the orderly development of these dynamic, growing apices. Control of spac-ing of leaf buttresses is not fully understood. Numerous experiments in-volving the use of mechanical devices to try and isolate one part of the apex from the rest have been carried out, and despite these painstaking experi-ments with growth hormones there is still a great deal to learn. It is very dif-ficult to conduct experiments in which only one variable at a time is studied. Also, apices develop in the very enclosed, protected environment of the leaf bases that has to be substantially disturbed so that observations can be made.

The root apex is similar in many respects to the stem apex and may also have a quiescent zone, but it has one conspicuous, major difference. It has a root cap, or calyptra, frequently produced by a meristematic zone called the calyptrogen (Fig. 2.4a). The cap acts as a buffer between the soft apical 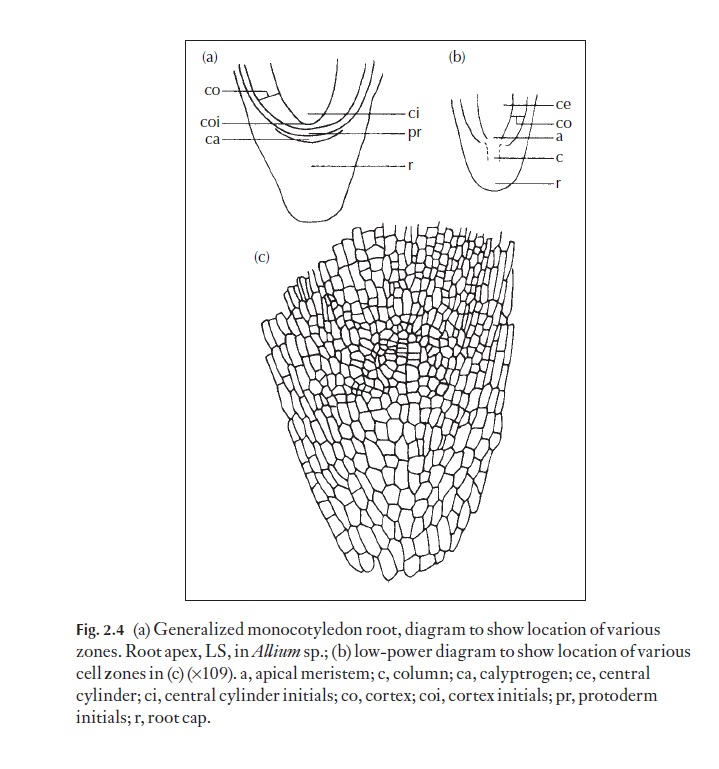 meristem and harsh soil particles. It wears away as growth progresses, but it is constantly renewed. It is believed to be the source of growth regulating substances that are involved in the positive geotropic response of most roots. Root caps can be seen easily on aerial roots of Pandanus and many epi-phytic orchids and submerged roots in aquatics (Pistia). Besides the calyp-trogen, the cell layers involved in the production of root epidermis and cortex, and the primary vascular system can be readily defined in thin, lon-gitudinal sections suitably stained. In some roots no distinct calyptrogen is produced. In Allium(Fig. 2.4b, c) a column of cells develops.

Whereas the shoot apex soon produces leaves and buds exogenously (in the outermost cell layers), the root organization is quite different. Lateral roots arise endogenously, from the pericycle cells (a single or multiple layer of parenchymatous cells to the outer side of the vascular system and to the inner side of the cylinder of cells with characteristically thickened walls, the endodermis), some distance from the apex (Fig. 2.5). This deep-seated origin requires that the lateral roots grow forcibly through the endodermis and cortex to reach the exterior. The distance to be spanned between the lateral root vascular system and that of the root from which it arises is short. 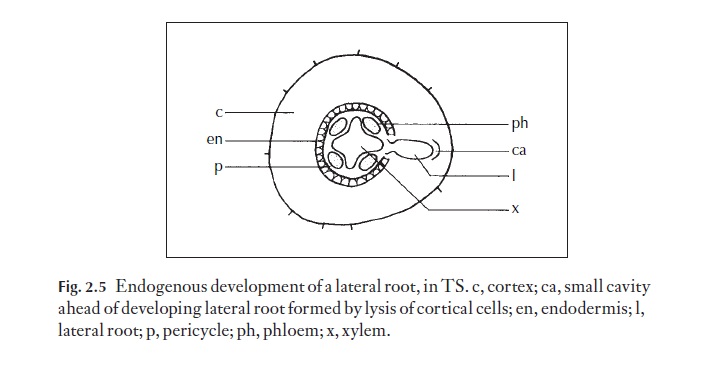 The vascular system from a bud apex has to develop towards the main stem system and eventually becomes joined to it.

Numerous papers have been published on the apical organization of shoots and roots in many plant families. Some are comparative and aim at conclusions of taxonomic significance, but others, and probably the more useful, are concerned with the development of the particular plants under study. As mentioned before, proper developmental studies demand a high degree of competence, and are vital to an understanding of mature plant forms.