The patterns of spread of carcinomas of the larynx depend on their site of origin and on well-defined anatomic barriers.

The patterns of spread of carcinomas of the larynx depend on their site of origin and on well-defined anatomic barriers. A detailed understanding of laryngeal anatomy is therefore an essential part of the dissection of any laryngeal specimen. Take time to look over the figures and refresh your memory of laryngeal anatomy.

The most important thing to remember about laryngal anatomy is that the larynx is composed of three anatomic regions: the supraglottis, the glottis, and the subglottis. The supraglottis is the portion of the larynx superior to the ventri-cles. It is composed of the epiglottis, the aryte-noids, the aryepiglottic folds, and the false cords. The glottis is composed of the true vocal cords and their anterior and posterior attachments, the anterior and posterior commissures. The sub-glottis begins 1 cm below the free edge of the vocal cords and extends inferiorly to the trachea. These three anatomic regions should be kept in mind throughout your description and dissec-tion of the larynx. 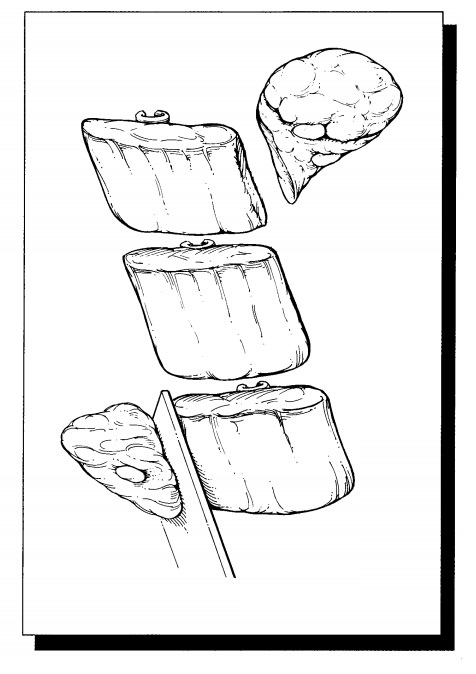 Three additional anatomic landmarks need to be defined because cancers that invade these landmarks frequently escape from the larynx. The pre-epiglottic space is the triangular space ante-rior to the base of the epiglottis. The pre-epiglottic space is filled with fatty connective tissue, and it is bounded posteriorly by the epiglottis, inferi-orly by the thyroepiglottic ligament, anteriorly by the thyrohyoid membrane, and superiorly by the hyoepiglottic ligament. The paraglottic space is a less well-defined area composed of loose connec-tive tissue, which lies between the thyroid carti-lage and two membranes that form the structural base for the vocal folds, the conus elasticus and quadrangular membrane. The anterior commissure is the anterior dense ligamentous attachment of the true vocal cords to the thyroid cartilage. The thyroid cartilage lacks an internal perichon-drium; therefore, carcinomas may invade the thyroid cartilage at the level of the anterior com-missure. Carcinomas may also escape the larynx inferiorly via the cricothyroid membrane.

Finally, although the pyriform sinuses are tech-nically part of the hypopharynx, one should be aware of them because they are frequently resected with the larynx. The pyriform sinuses are small pouches that extend inferiorly from the intersection of the aryepiglottic folds, glossoepig-lottic folds, and pharyngeal wall. Depending on the size and location of the tumor, laryngeal specimens may also include other portions of the hypopharynx (including the posterior pharyn-geal wall and the pharyngo-esophageal junction) and the thyroid gland. 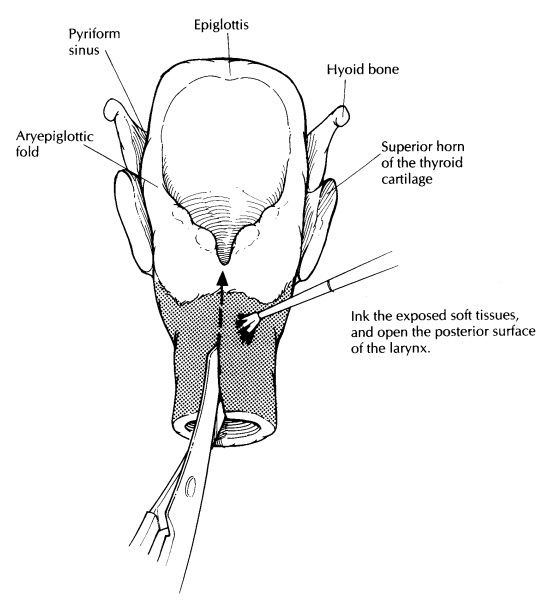 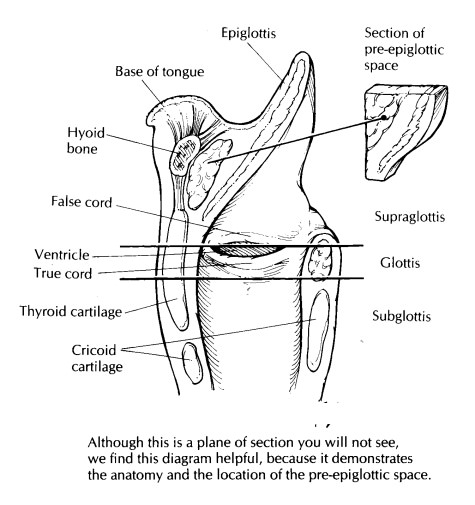 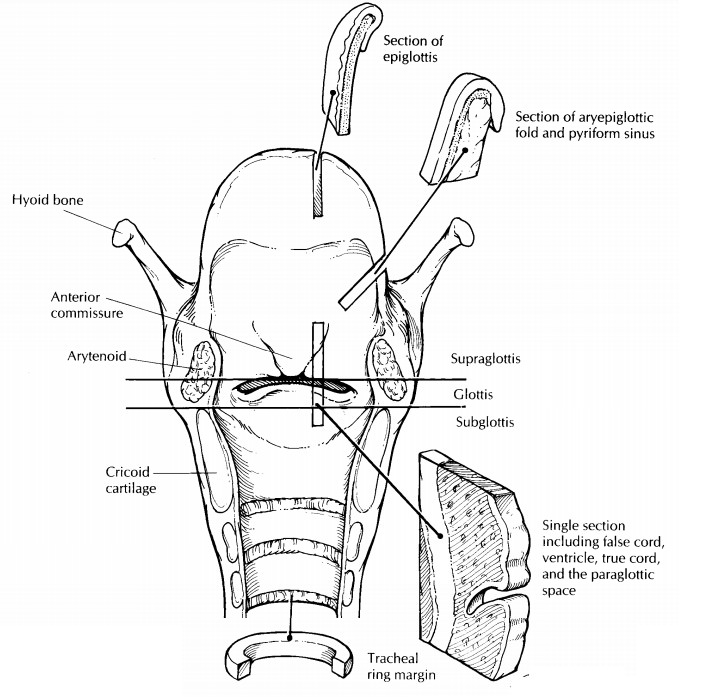