Land transport with trucks or smaller vehicles is commonly used for live fish and also for other aquatic organisms.

Land transport with trucks or smaller vehicles is commonly used for live fish and also for other aquatic organisms. The method is especially suit-able for fry, juvenile and small sized species (<1 kg), because the weight is limited. When moving large adult fish, the total cargo weight of the vehicle is a limiting factor. The same is the case for the size of the fish transport tanks.

There are several types of land vehicle used for fish transport, including vans, wagons and trucks. Nor-mally the vans and trucks have two axles, but larger trucks with several axles and trucks with a trailer or semi trailer may also be used. Calculations have shown that the unit transport cost decreases with increasing size of truck: in going from a two to three axle truck, and a tank volume of 4 m3 to one of 8 m3, the trucking costs will increase by 30% while the transport volume is doubled. A good journey on the truck is an advantage for both the fish and the equipment.

Fish transport trucks can be completely special-ized. Combined trucks that are also used for other purposes, such as general cargo, may also be used; the advantage with the second option is that it might be difficult to keep the truck fully booked all year round with fish transport alone.

Two main types of tank are used for fish transport (Fig. 18.1): either a separate removable tank is placed on a platform on the truck, or the tank can be attached directly to the truck chassis. Removable tanks are normally prefabricated in sizes ranging from 200 to 4000 l capacity. Fibre glass is commonly used for tanks, but stainless steel and aluminium may also be used. If the truck is to be used for other purposes the fish tanks can easily be removed. If the tank is specially designed to be fixed directly to the truck chassis more time will be needed to remove it before the truck can be used for other purposes. Fixed tanks are normally made of stainless steel or aluminium; inside they are divided into separate compartments. The principle is the same as that used for tanks for transporting other liquids such as milk or fuel. These tanks are also divided into separate compartments inside, even if this is not apparent from the outside. 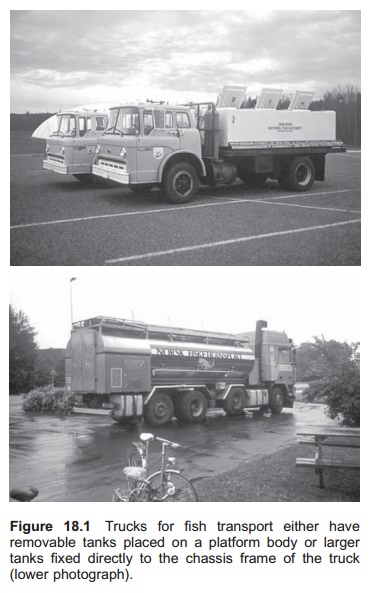 The fish are loaded through hatches on the top of the tanks and unloaded through special tapping valves in the bottom. It is important that there are smooth connections so the fish are not wounded. To avoid temperature variations during transport tanks may be constructed with a double wall with insulation in between. However, if insulated cabinet trucks are used for transport of single tanks, this is not necessary.

Regular cleaning and disinfection of the trans-port equipment is necessary; this requires the tank to be designed in a way that makes it easy to clean, with smooth surfaces for instance. ‘Dead areas’ where cleaning is difficult must be avoided. The inner tank surface area must tolerate standard dis-infection liquids. The material must be of a closed structure to avoid water being forced into it so that later disinfection is difficult.

The fish consume oxygen during transportation and additional oxygen must be supplied if the transport lasts for some time. The amount of oxygen needed can easily be calculated by looking at the available oxygen in relation to the consumption by the fish. Oxygen is usually supplied from bottles attached to the truck and is added to the water in the fish tanks through diffusers which lie on the tank bottom. Air may also be used as an oxygen source for the fish; in this case the truck must be equipped with an air blower. If transport-ing fish at high density and only adding air through diffusers in the bottom of the tank, large numbers of bubbles in the water can result, which is not recommended because it will stress the fish. When adding air, supersaturation with nitrogen must be avoided. It is important to get a good distribution of the added air or oxygen throughout the tank; an airlift pump may be used to create a flow inside the tank and hence an improved distribution.

When fish are transported for long periods of time (>12 h), depending on the density, problems may result from accumulation of carbon dioxide in the tanks. Airlift pumps may be used to aerate the water and will also remove some of the excess carbon dioxide. They will also cause the water to circulate inside the tank (Fig. 18.2). When using such a pump, the air is supplied via a perpendicular 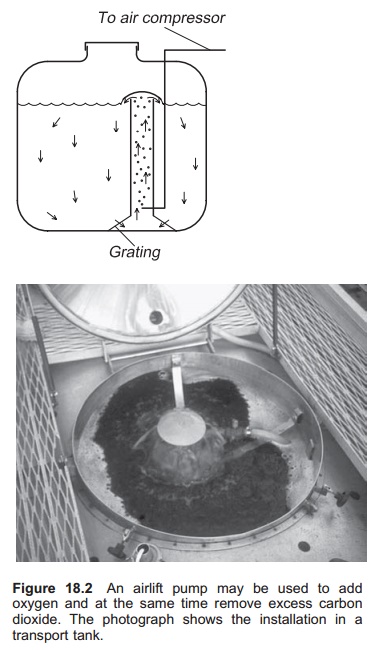 closed pipe which runs from a few centimetres above the tank bottom to a few centimetres above the water surface. The addition of air to the water inside the pipe creates bubbles which will drag the water towards the surface and in this way generate a water flow inside the tank. The air blower is fixed to the frame of the truck. To get proper water circulation, an airlift pump can be placed near the centre of the tank; however, it must not inhibit filling of the tanks with fish through the hatches on the top.

Near the bottom of the tank the airlift pump will create an area of low pressure and the fish may get stuck to the inlet of the perpendicular pipe. To avoid this, a wide perforated screen should be placed around the inlet to reduce the water velocity and possibilities for the fish to get stuck.

When using the airlift pump it is important to be aware that when carbon dioxide is removed from the water there will be an increase in pH and hence an increase in the concentration of ammonia relative to ammonium ion. Ammonia is rather more toxic to the fish than ionic ammonium and could cause problems in high concentrations. The reason for this is that the equilibrium NH3ª NH+4 is pH dependent.

A system for cleaning and re-use of the transport water or dosing with additives.

Few trucks are equipped with cleaning and water re-use systems, and few operators use additives (see below), so water exchange is therefore the most common method. Because of this fish transport must be properly planned, taking into consideration the duration of the trip, the oxygen requirements of the fish and the necessity of water exchange. When exchanging water, the incoming water must be of satisfactory quality, so that a stable water environment is maintained for the fish. To avoid additional stress it must have a similar quality to that of the production water. When exchanging water, mixed zone problems must be taken into consideration,6 In addition the water must not contain any micro-organisms which are harmful to the transported fish. The outlet water must be treated and released in a secure place, because it might contain micro-organisms that could harm the natural fish stocks in the area. It is therefore important to know the government regulations regarding intake and release of transport water.

The density of the fish during transport is of importance for transport economy. Hence the amount of water transported must be as low as possible in relation to the amount of fish. An accurate limit of the correct density for transport is difficult to calculate and may vary greatly among species, size and development stage. For instance, Tilapia can be transported at higher densities than rainbow trout. If the water temperature increases, the density must normally be reduced. For salmon, which is a species that has very high requirements regarding water quality, a rough estimate says that for temperatures below 8°C a density of up to 90–100 kg/m3 may be supported;7,8 if the temperature is above 8°C, a density of up to 50 kg/m3 is recommended. If the temperature is very high, transport is difficult, because both the oxygen requirements of the fish will increase and the oxygen content in the water will decrease. Another way to express density is as the percentage of fish in the total transport water volume. At a water temperature of 18°C, densities for catfish of up to 38%, Tilapia 32%, carp 15% and drum 4% have been reported for transports of duration 8–16 h for fish of various sizes.

Some insurance companies have their own guide-lines regarding density of fish under transport. These guidelines must be known before transportation, if the fish are to be insured. There may also be government regulations governing fish density.

The temperature and oxygen level should be monitored during fish transportation to control and avoid critical situations. Therefore the truck must possess the necessary instruments such as a thermometer and an oxygen meter. These may be simple portable devices or fixed so that they can be read straight from the driver’s cab. An alarm system may also be installed to detect and respond to variations in these parameters.

When transporting fish one should not, however, depend entirely on the instruments installed in the tank. Visual control is also necessary. Programmed stops are recommended for observation of fish behaviour. The frequency of these stops may vary: a stop quite early in the trip is recommended, for instance 15 min after the start, and subsequently each hour or every two hours thereafter.

It is necessary to keep a logbook during the journey in which parameter values and observations are registered. It is also necessary to record fish behaviour and any special occurrences during transportation. If something happens to the fish during or directly after transportation, the logbook could be used to find a possible explanation and to claim on the insurance policy. The economic value of the transported fish can be quite high: if trans-porting 100 g salmon smolt, each valued at 1 €, in a 10 m3 tank with a fish density of 50 kg/m3, the total value of the cargo will be 5000 €.