The Kaplan turbine is a propeller-type water turbine which has adjustable blades.

The Kaplan turbine is a propeller-type water turbine which has adjustable blades. It was developed in 1913 by the Austrian professor Viktor Kaplan, who combined automatically - adjusted propeller blades with automatically-adjusted wicket gates to achieve efficiency over a wide range of flow and water level.

The Kaplan turbine was an evolution of the Francis turbine. Its invention allowed efficient power production in low- head applications that was not possible with Francis turbines.

Kaplan turbines are now widely used throughout the world in high-flow, low-head power production. The Kaplan turbine is an inward flow reaction turbine, which means that the working fluid changes pressure as it moves through the turbine and gives up its energy. The design combines radial and axial features. 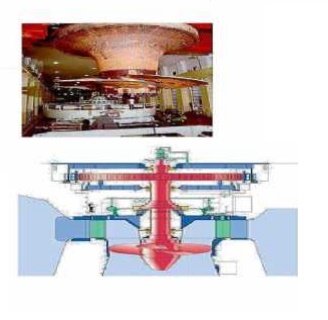 The inlet is a scroll-shaped tube that wraps around the turbine's wicket gate. Water is directed tangentially through the wicket gate and spirals on to a propeller shaped runner, causing it to The outlet is a specially shaped draft tube that helps decelerate the water and recover kinetic energy.

The turbine does not need to be at the lowest point of water flow as long as the draft tube remains full SCEofwater. A higher the draft tube. The resulting pressure drop may lead to cavitation.

Variable geometry of the wicket gate and turbine blades allow efficient operation f or a range of flow conditions. Kaplan turbine efficie ncies are typically over 90%, but may be lower i n very low head applications.

Kaplan turbines are widely used throughout the world for electrical power prod uction. They cover the lowest head hydro sites and are especially suited for high flow conditions. Inexpensive micro turbines are manufactured for individual power production with as little as two feet of head.Kaplan turbine is low head turbine. Large Kaplan turbines are individually designed for each site to operate at th e highest possible efficiency, typically over 90%. They are very expensive to design, manufacture and install, but operate for decades.

Problem: A Kaplan turbine works under a head of 26.5 m, the flow rate of water being 1 70 m3/s. The overall efficiency is 90%. Determine the po wer and specific speed. The turbine speed is 150 rpm. 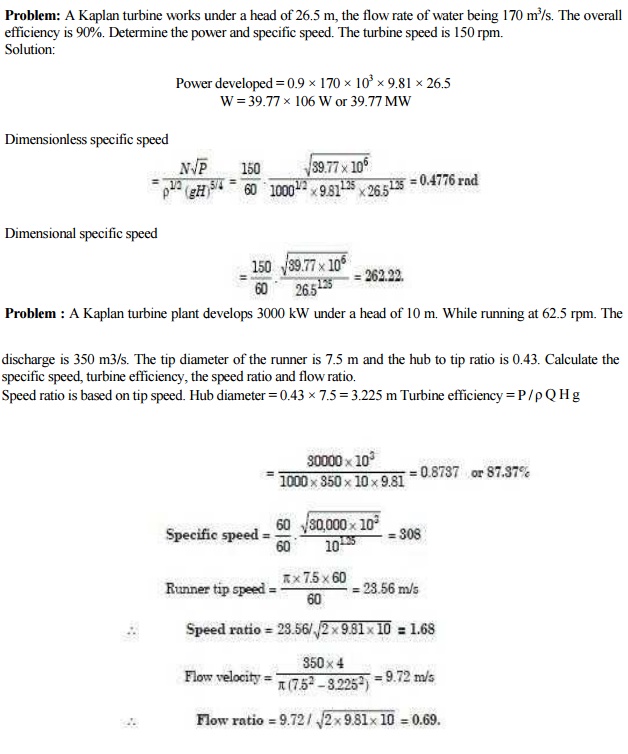 The Kaplan turbine is the most widely used of the propeller-type turbines, but several other variations

Propeller Turbines have non-adjustable propeller vanes. They are used in where the range ofhead is

S- turbines eliminate the need for a bulb housing by placing the generator outside of the waterchannel. This is accomplished with a jog in the water channel and a shaft connecting the runner and generator.

Tyson         turbines  are  a fixed propeller  turbine designed  to  be  immersed  in  a  fast flowing river,either permanently anchored in the river bed, or attached to a boat or barge.