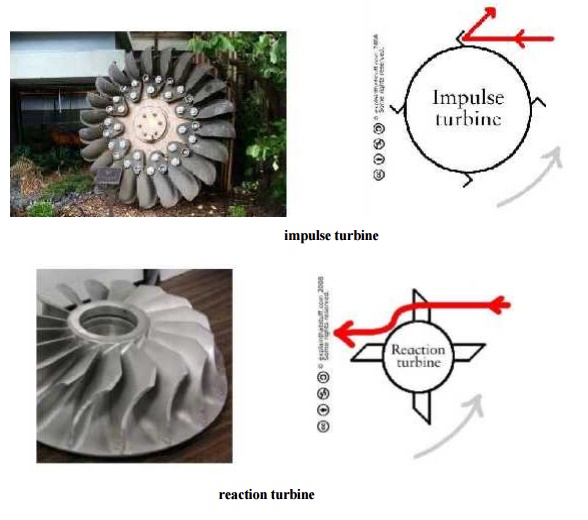 The main classification depends upon the type of action of the water on the turbine. These are (i) Impulse turbine (ii) Reaction Turbine.

Most of the electrical generators are powered by turbines. Turbines are the primemovers of civilisation. Steam and Gas turbines share in the electrical power generation is about 75%. About 20% of power is generated by hydraulic turbines and hence thier importance. Rest of 5% only is by other means of generation.

Hydraulic power depends on renewable source and hence is ever lasting. It is also non polluting in terms of non generation of carbon dioxide.

When the nozzle is completely closed, the amount of water striking the runner reduces to zero but the runner due to inertia goes on revolving for a long time to stop the runner in a short time a small nozzle is provided which direct the jet of water on the back of vanes .This jet of water is called breaking jet.

The main classification depends upon the type of action of the water on the turbine. These are

(i) In the case of impulse turbine all the potential energy is converted to kinetic energy in the nozzles. The impulse provided by the jets is used to turn the turbine wheel. The pressure inside the turbine is atmospheric.

This type is found suitable when the available potential energy is high and the flow available is comparatively low. Some people call this type as tangential flow units. Later discussion will show under what conditions this type is chosen for operation.

(ii) In reaction turbines the available potential energy is progressively converted in the turbines rotors and the reaction of the accelerating water causes the turning of the wheel.

confusingly described (and sometimes completely muddled up) when people try to explain them. So what's the difference?

In an impulse turbine, a fast-moving fluid is fired through a narrow nozzle at the turbine blades to make them spin around. The blades of an impulse turbine are usually buck et-shaped so they catch the fluid and direct it off at an angle or sometimes even back the way it came (because that gives the most efficient transfer of energy from the fluid to the turbine). In an impulse turbine, the fluid is forced to hit the turbine at high speed. Imagine trying to make a wheel like this turn around by kicking soccer balls into its paddles. You'd need the balls to hit hard and bounce back well to get the wheel spinning-and those constant energy impulses are the key to how it works.

If an impulse turbine is a bit like kicking soccer balls, a reaction turbine is more like swimming-in reverse. Let me explain! Think of how you do freestyle (front crawl) by hauling your arms through the water, starting with each hand as far in front as you can reach and ending with a "follow through" that throws your arm well behind you.

What you're trying to achieve is to keep your hand and forearm pushing against the water for as long as possible, so you transfer as much energy as you can in each stroke. A reaction turbine is using the same idea in reverse: imagine fast-flowing water moving past you so it makes your arms and legs move and supplies energy to your body! With a reaction turbine, you want the water to touch the blades smoothly, for as long as it can, so it gives up as much energy as possible. The water isn't hitting the blades and bouncing off, as it does in an impulse turbine: instead, the blades are movin g more smoothly, "going with the flow".