Chapter: Introduction to Botany: Sybiogenesis and the Plant Cell

In 1665, Robert Hooke looked at cork under a microscope and saw multiple chambers which he called “cells”. In 1838, Schleidern and Schwann stated that (1) all plants and animals are composed of cells and that (2) cell is the most basicunit (“atom”) of life. In 1858, Virchow stated that (3) all cells arise by reproduction from previous cells (“Omnis cellula e cellula” in Latin). These three statements became the base of the cell theory.

The minimal cell should have three things: protein-synthesizing apparatus (from DNA to RNA and proteins), space designated for all other chemical reactions (jelly-like cytoplasm) and the oily film separating cell from its environment (membrane). 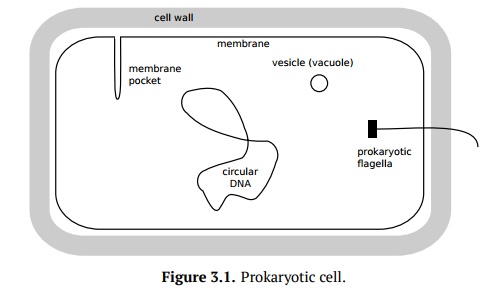 The cell membrane of all cells has two layers. One end of each layer is polar and hydrophilic, while the other end is hydrophobic. These layers are made with phospholipids which are similar to typical lipids but have polar head with phosphoric acid, and two hydrophobic, non-polar tails (Fig. 3.2). Apart from phospholipinds, membrane contains embedded other lipids like cholesterol (in animal cells only) and chlorophyll (in some plant membranes), proteins and car-bohydrates. Proteins are extremely important because without them, membrane does not allow large hydrophylic molecules and ions to came trough. 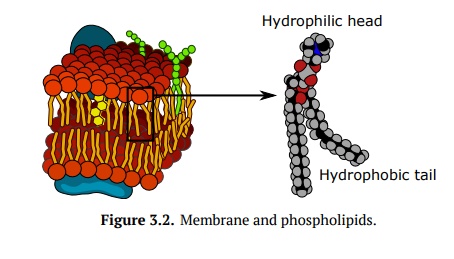 Cells which have DNA in a membrane-bound nucleus are known as eukaryotic, while those which do not are known as prokaryotic. Prokaryotic cells have their DNA surrounded by the cytoplasm. Some have also prokaryotic flagella (rotat-ing protein structure), a cell wall, vesicles and membrane folds/pockets (Fig. 3.1). Eukaryotic cells have their DNA in a nucleus which separates it from the cytoplasm.

There are many other parts of the eukaryotic cell (Fig. 3.4). The nucleus of the cell contains DNA and proteins. Nucleoli are in the nucleoplasm, this is the place where ribosomal RNAs are assembling. Ribosomes, found in the cytoplasm, help to synthesize proteins. The endoplasmic reticulum (ER), usually found near edge of the cell, is where proteins are synthesized, packaged and transported. In many cells, ER is connected with nucleus membrane. The Golgi apparatus directs proteins and other substances to the part of the cell where they need to go. Eukaryotic cells must have mitochondria and might have chloroplasts, both originated via symbiogenesis (see below). Mitochondria are covered with two membranes, the inner membrane has intrusions called cristae. Mitochon-dria break down organic molecules into carbon dioxide and water in a process known as oxidative respiration.

Figure 3.3. Osmosis in (from left to right) hypertonic (high salt), isotonic and hypotonic(low salt) environments. Blue color is for the vacuole. Red arrows on the right image show turgor—combined pressure of the vacuole and the cell wall.

Cell wall (common in plants and fungi) surrounds the cell and limits how farthe cell can expand due to osmosis (Fig. 3.3). Since osmosis may result in un-controllable expansion of cell, cells without cell walls must find a way to pump out the excess water.Vacuole(s) is the large vesicle(s) which can do a variety of things for the cell, for instance store nutrients, accumulate ions, or become a place to store wastes. It plays an important role in the turgor (Fig. 3.3). 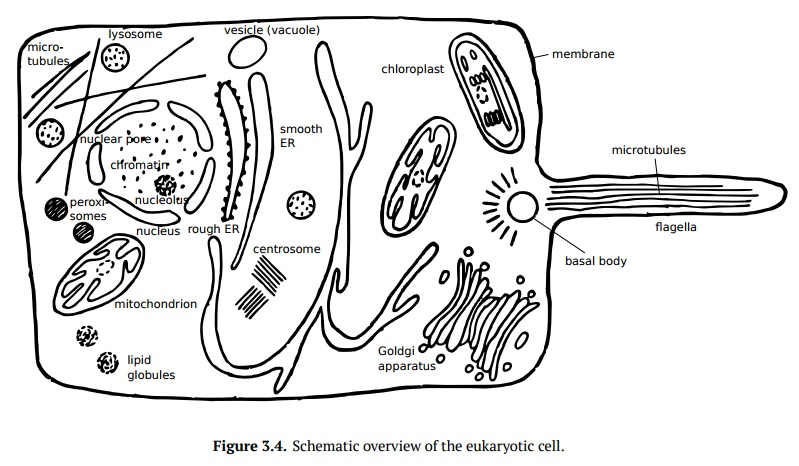