The front end translates a source program into an intermediate representation from which the back end generates target code.

Benefits of using a machine-independent intermediate form are:

1.         Retargeting is facilitated. That is, a compiler for a different machine can be created by attaching a back end for the new machine to an existing front end.

2.     A machine-independent code optimizer can be applied to the intermediate representation.

The semantic rules for generating three-address code from common programming language constructs are similar to those for constructing syntax trees or for generating postfix notation.

A syntax tree depicts the natural hierarchical structure of a source program. A dag (Directed Acyclic Graph) gives the same information but in a more compact way because common subexpressions are identified. A syntax tree and dag for the assignment statement a : = b * - c + b * - c are shown in Fig.3.2:

Postfix notation is a linearized representation of a syntax tree; it is a list of the nodes of the tree in which a node appears immediately after its children. The postfix notation for the syntax tree given above is

Syntax trees for assignment statements are produced by the syntax-directed definition. Non-terminal S generates an assignment statement. The two binary operators + and * are examples of the full operator set in a typical language. Operator associativities and precedences are the usual ones, even though they have not been put into the grammar. This definition constructs the tree from the input a : = b * - c + b* - c.

Two representations of the syntax tree are as follows. In (a) each node is represented as a record with a field for its operator and additional fields for pointers to its children. In (b), nodes

are allocated from an array of records and the index or position of the node serves as the pointer to the node. All the nodes in the syntax tree can be visited by following pointers, starting from the root at position 10. 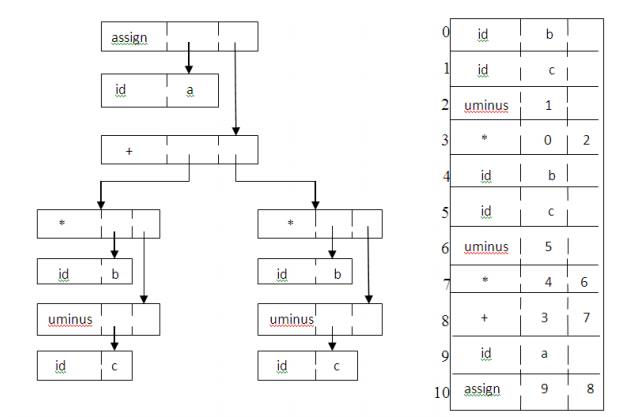 Three-address code is a sequence of statements of the general form x : = y op z

where x, y and z are names, constants, or compiler-generated temporaries; op stands for any operator, such as a fixed- or floating-point arithmetic operator, or a logical operator on boolean-valued data. Thus a source language expression like x+ y*z might be translated into a sequence

where t1 and t2 are compiler-generated temporary names.

* The unraveling of complicated arithmetic expressions and of statements makes three-address code desirable for target code generation and optimization. * The use of names for the intermediate values computed by a program allows three-address code to be easily rearranged - unlike postfix notation.

Fig.3.5 Three-address code corresponding to the syntax tree and dag

The reason for the term “three-address code” is that each statement usually contains three addresses, two for the operands and one for the result.

The common three-address statements are:

1.    Assignment statements of the form x : = y op z, where op is a binary arithmetic or logical operation.

2. Assignment instructions of the form x : = op y, where op is a unary operation. Essential unary operations include unary minus, logical negation, shift operators, and conversion operators that, for example, convert a fixed-point number to a floating-point number.

3. Copy statements of the form x : = y where the value of y is assigned to x.

4.     The unconditional jump goto L. The three-address statement with label L is the next to be executed.

5.  Conditional jumps such as if x relop y goto L. This instruction applies a relational operator (<, =, >=, etc. ) to x and y, and executes the statement with label L next if x stands in relation relop to y. If not, the three-address statement following if x relop y as in the usual sequence.

6. param x and call p, n for procedure calls and return y, where y representing a returned value is optional. For example,

When three-address code is generated, temporary names are made up for the interior nodes of a syntax tree. For example, id : = E consists of code to evaluate E into some temporary t, followed by the assignment id.place : = t.

The nonterminal E has two attributes :

Fig.3.6 Semantic rules generating code for a while statement

The function newtemp returns a sequence of distinct names t1,t2,….. in response to successive calls.

Ø     Notation gen(x ‘:=’ y ‘+’ z) is used to represent three-address statement x := y + z. Expressions appearing instead of variables like x, y and z are evaluated when passed to gen, and quoted operators or operand, like ‘+’ are taken literally.

Ø     Flow-of-control statements can be added to the language of assignments. The code for S

while E do S1 is generated using new attributes S.begin and S.after to mark the first statement in the code for E and the statement following the code for S, respectively.

The function newlabel returns a new label every time it is called.

We assume that a non-zero expression represents true; that is when the value of E becomes zero, control leaves the while statement.

A three-address statement is an abstract form of intermediate code. In a compiler, these statements can be implemented as records with fields for the operator and the operands. Three such representations are: Quadruples, Triples, Indirect triples

Ø     A quadruple is a record structure with four fields, which are, op, arg1, arg2 and result.

Ø     The op field contains an internal code for the operator. The three-address statement x : = y op z is represented by placing y in arg1, z in arg2 and x in result.

Ø     The contents of fields arg1, arg2 and result are normally pointers to the symbol- entries for the names represented by these fields. If so, temporary names must be entered into the symbol table as they are created.

Ø     To avoid entering temporary names into the symbol table, we might refer to a temporary value by the position of the statement that computes it.

Ø     If we do so, three-address statements can be represented by records with only three fields: op, arg1 and arg2.

Ø     The fields arg1 and arg2, for the arguments of op, are either pointers to the symbol table or pointers into the triple structure ( for temporary values ).

Ø     Since three fields are used, this intermediate code format is known as triples.

A ternary operation like x[i] : = y requires two entries in the triple structure while x : = y[i] is naturally represented as two operations.

Another implementation of three-address code is that of listing pointers to triples, rather than listing the triples themselves. This implementation is called indirect triples.

For example, let us use an array statement to list pointers to triples in the desired order. Then the triples shown above might be represented as follows: