Chapter: Obstetrics and Gynecology: Immediate Care of the Newborn

Initial Care of the Ill Newborn 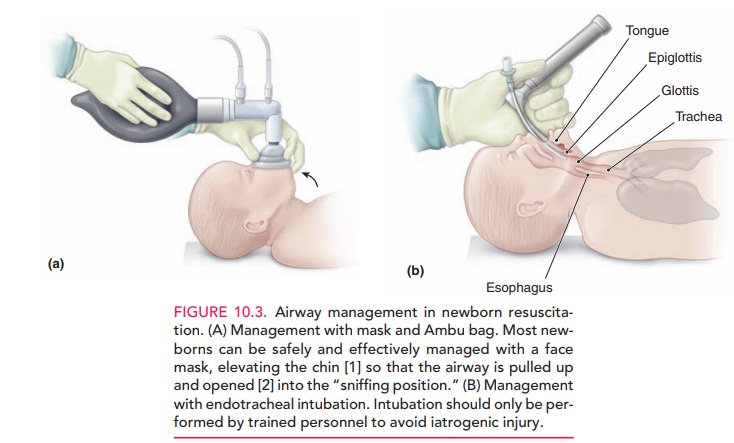 Although most deliveries are uncomplicated, requiring only basic neonatal care, resuscitation may be necessary in up to 10% of all deliveries; 1% of these require major resuscitative efforts.

INITIAL CARE OF THE ILL NEWBORN

Although most deliveries are uncomplicated, requiring only basic neonatal care, resuscitation may be necessary in up to 10% of all deliveries; 1% of these require major resuscitative efforts. The need for these efforts increases in circumstances such as premature birth, low–birth-weight infants, prolonged labor, and non-reassuring measures of fetal well-being. Not all deliveries occur in a setting with intensive pediatric care immediately available. In the absence of such staff and facilities, maternal transport to a facility with a greater capacity to provide appropriate care should be attempted before delivery. Alternatively, the transport of a neonatal team from a tertiary care center to the primary care site is an option.

The normal newborn breathes within seconds of delivery and usually has established regular respirations within 1 minute of delivery. If the neonate is having difficulty breathing, ventilation, chest compression, and epineph-rine should be instituted, as shown in the protocol in Figure 10-2. If an infant does not respond to epinephrine, hypovolemic shock should be considered, especially if there is evidence of blood loss. In this case, intravenous normal saline at 10 mL/kg should be given.

The same principles of adult resuscitation (airway, breath-ing, and circulation) apply to neonatal resuscitation (Figure10.3). First, the newborn is transported to a radiant warm-ing unit to be thoroughly dried. When drying the infant, it is important to remove wet towels to minimize the effect of evaporation that would otherwise lead to a rapid drop in core body temperature. The nose and oropharynx are suc-tioned to ensure an open airway as the infant is placed in the  supine position. 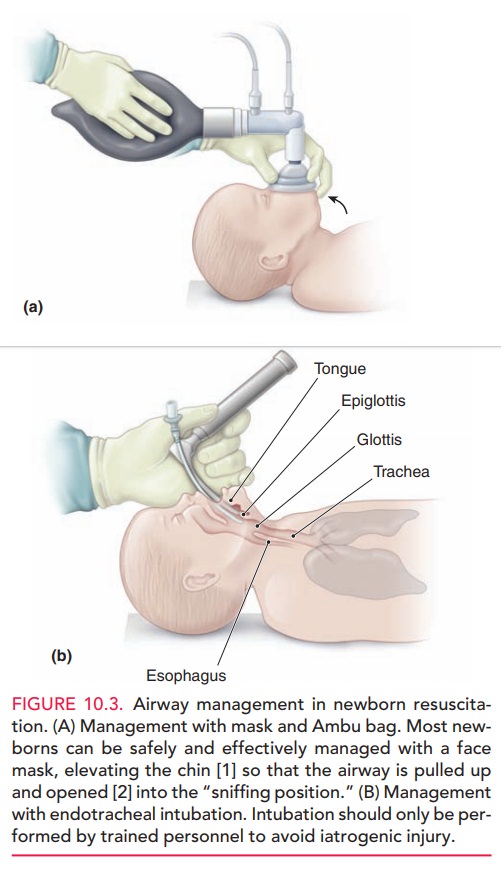 The head should be positioned with the neck slightly extended—the “sniffing position”—to allow for maximal air entry. Drying and suctioning, along with providing mild stimulation by rubbing the back or soles of the feet—or flicking the soles of the feet—help to stimulate the infant to breathe and cry.

Respiratory distress may occur as a consequence of maternal narcotic administration during labor. A narcoticantagonist can be considered only if severe respiratory pres-sure ventilation has improved the heart rate and color, and the mother received narcotics within 4 hours of delivery.

In infants born to a narcotic-addicted mother, naloxone iscontraindicated because the immediate withdrawal symp-tom that ensues can be life-threatening.

During the resuscitation process, the metabolic well-being of an ill newborn is most accurately assessed using umbil-ical cord blood gases. Cord blood gases should be obtainedin cases of cesarean delivery for fetal compromise, a low 5-minute Apgar score, severe growth restriction, abnormal fetal heart rate tracing, maternal thyroid disease, intra partum fever, and multifetal gestations. A segment of umbilical cord is double-clamped and cut and placed on the delivery table pending assessment of the 5-minute Apgar score, so that it may be taken for assessment of pH, PO2, PCO2, HCO3, and base deficit. It should be remem-bered that, in the fetus, freshly oxygenated blood from the placenta travels to the fetus through the umbilical vein, and blood metabolized by the fetus travels back to the placenta through two umbilical arteries. The most meaningful assess-ment of metabolic status of the infant at the time of delivery is through analysis of umbilical artery blood gases. Analysis ofpaired arterial and venous specimens should prevent debate over whether a true arterial specimen was obtained. There-fore, where possible, obtaining both venous and arterial samples (paired specimen) is recommended. Normal val-ues for umbilical arterial and venous samples are given in Table 10.2.

Acidemia is generally accepted as an increase inhydrogen ion concentration in an umbilical arterial sam-ple resulting in a pH of <7.20. Fetal asphyxia is defined as a condition of impaired blood gas exchange leading to progressive hypoxemia and hypercapnia with a significant metabolic acidosis (base deficit >=12 mmol/L).

The base deficit can be used to predict metabolic acidosis sig-nificant enough to cause newborn complications.

Ten percent of newborns with a base deficit of 12 to 16 mmol/L and 40% of newborns with a base deficit of >16 mmol/L will have moderate to severe complications, such as newborn encephalopathy and cardiovascular and respiratory complications. The terms acidemia, acidosis, andasphyxia should be used carefully when applied to the newborn condition, because each term defines a series of changes that may or may not represent true metabolic compromise.

Umbilical cord blood is now known to contain potentially life-saving hematopoietic stem cells for possible adult trans-plant for the correction of inborn errors of metabolism, hematopoietic malignancies, and genetic disorders of the blood and immune system. If a patient requests information on umbilical cord banking, balanced and accurate informa-tion regarding the advantages and disadvantages of public or private banking should be provided.

The remote chance ofan autologous unit of umbilical cord blood being used for a child or a family member (approximately 1 in 2700 individuals) should also be disclosed.